14th August 2014: The Lanes and Fells of Lancashire

You know those days when the forecast is 'iffy', but once you are out on your bike it's perfectly fine?  Well this wasn't one of those days!  Rain showers were plentiful and heavy, and the best sunshine was on the M6 return drive.  Ivan was full of praise for the food and service at No. 61 King Street.  The route down to the River Ribble was soon rural, and easy, and green.  On reaching Roman Ribchester I tried to show the group the ancient bathhouse, but the great unwashed were sneeringly dismissive, asserting that Chester's were bigger and better!  The cafe at Ribchester was friendly and cosy, and we were soon tead, teacaked and toiletted ready for our first climb in the direction of Hurst Green.  A short diversion took in the well-preserved and pretty almshouses at Stydd. 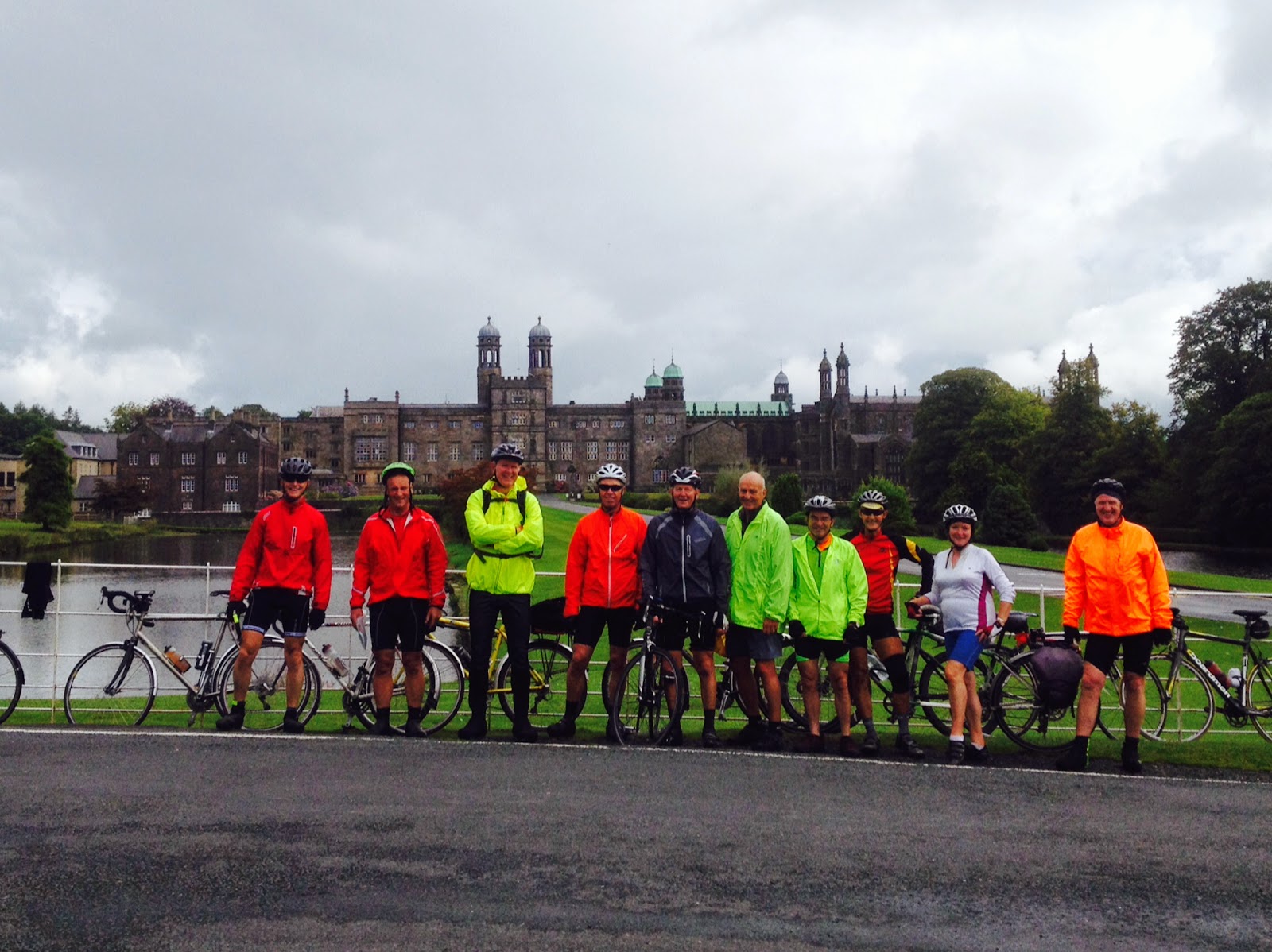 Stonyhurst College is a stunning vision as you turn the corner and see this impressive baroque building for the first time.  It was from here that my devious plan was to operate.  The faster riders could take off and ride alongside Longridge Fell's northern edge, eventually circumnavigating Beacon Fell, and meeting the less ambitious back at Chipping for lunch.  They seemed a bit reluctant to clear off!  Mike and Brian tried to be helpful with regard to taking my marked map.  Mike's excellent local knowledge would be invaluable.  The advantages would be a quiet, scenic extra 10 mile for some, while the tandem group could cope with the climb to Chlpplng at a slower pace.  This arrangement would also slightly stagger lunch, and get the tandem out ahead of the game for the afternoon.  Like most of my inspired ideas the plan never really got off the ground.  Heavy rain and a farmer scattering thorns meant that the fast group abandoned Beacon Fell, and we all arrived at The Sun simultaneously.  Well, not quite, Dave broke the chain on his tandem in a last effort to reach a menu card first.  He expertly fixed the tandem in the backyard of the pub, with support from Keith, and the use of a puddings board acting as an incentive to work quickly.  The food was fine and the service friendly at The Sun, but despite my pre- booking we were there a little while with eleven orders and probably one chef.  However, the upside was everyone chatting and getting on so well together. 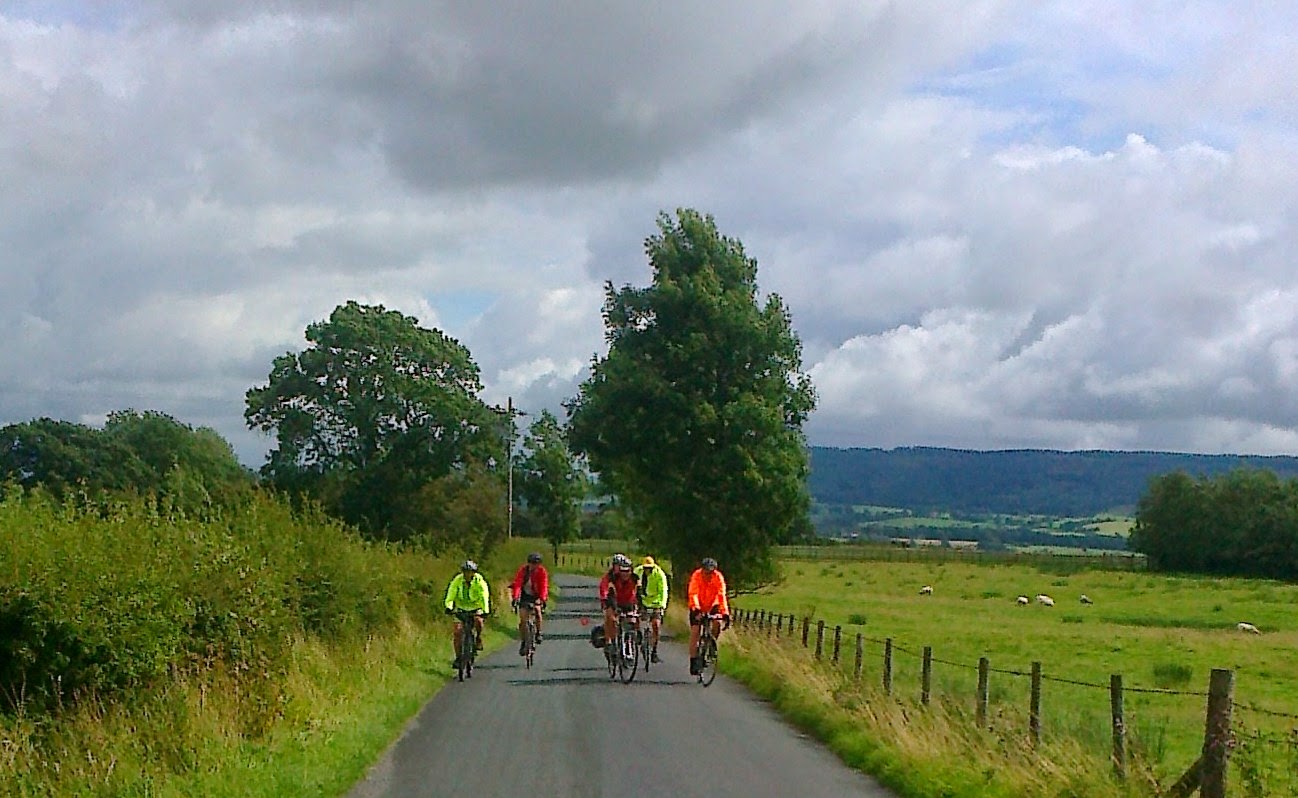 We took the Quiet Lane out of Chipping and headed for the Wild Boar Park.  I was grateful to Mike for leading the faster group, and to Brian, Keith and the two Steves for supporting the tandem.  Before the exhilarating swoop down to Burholme Bridge there was a wonderful, panoramic view of Bowland and beyond.  The road to Dunsop Bridge was alongside the river and true easy riding for a while.  Steve H and Brian were advised of a short route on foot past the road closure at Newton, while the tandem and co. climbed up the fell and came down again at Slaidburn.  Slaidburn is an attractive, stone- housed village, but once across the burbling water there is a steep climb.  Steve and Brian had waited for us, and the fast group was well ahead at this stage.  The rain started lashing down as we approached the lovely sweep down toward Sawley Abbey on the Lancashire Cycleway route.  You can normally clearly see the peaks in the Yorkshire Dales here.  Because of the weather Dave and Liz had done more costume changes than Kellie Maloney!  As we came down it looked as if the road had been dry all day.  Grindleton and Downham were by-passed in order to reach our ordered cream teas at The Calf's Head in Worston.  We just made it, gratefully tucking in to jam, cream and scones and hot drinks.
Our few miles back were flat and leafy, and we met Clive and Ivan at The Eagle in Barrow.  Despite the weather the camaraderie had been excellent.  Everyone had been helpful and tolerant, and this made the day enjoyable and worthwhile.  That Keith has to bust a gut to arrange shift swops to cycle with us in the rain, and loved it, says it all!  Attendees: Dave H, Dave & Liz P, Keith, Clive, Ivan, Brian Mac, Petar, Mike G, Steve H and Steve T.
DH