The weather forecast was for light rain, heavy rain, dry then light rain: it wasn’t wrong!  So, I was a little surprised to see a lot of riders at Manley for the off. Dave H proposed Option One, the "George and Dragon" at Great Budworth, and, in the absence of Option 2, it was carried unanimously. So we set off in the pouring rain up the road and hill towards Manley School.
It became clear that splitting into two groups was a better option so John, Steve T, Ray, Paul R and myself pushed on towards Kingsley, and, via the Dark Lane traverse, out via Roddy Lane. We then took the familiar "no-through" road route up Cliff Road to Acton Bridge. Out via Little Leigh, we were in danger of arriving at the pub far too early and so a diversion was called for. A handy, yet defunct, bus shelter appeared and I got out the iPhone from its protective enclosure to plot the diversion. I had to get out of the rain because, although the clear cover allows you to operate the phone through the clear cover, it doesn’t do so when the cover is wet, and it was wet and we were wet!  So now we head northeast towards Antrobus on our roundabout way to Arley Hall. I espy a footpath in Reed Lane and the “shortcut” to Laurel Farm. It was OK, but will be better in summer when it’s dry under the tyres.
We now go round the compass down new lanes to enter Arley Hall. There seems to be a lot of prohibition notices about cyclists and private bridleways but my OS says that the back lane around the hall is a public footpath and so, because it was wet, we continued to cycle over the cobbles to exit east of the estate. It’s now an easy 2 miles to Great Budworth. I switch off the satnav as the battery is a bit down and we end up in Pickmere!  Across the vale, I can see Great Budworth church, so apologise for the minor diversion. Steve T arrives walking with a flat tyre. John and Paul shoot off to bag a table at the pub whilst Ray pumps up the errant tyre and we then send Steve off to maximise the cycling time on a punctured tyre. Ray and I catch him up after a quarter mile stationary, at the roadside, with the same flat tyre. Steve offers to use the "pump/ride/pump/ride" strategy to get to the pub and sends us on our way. Well, there are no direction signs, and we initially take the wrong lane to the pub but realise that it’s the next one 25m up the road. So Ray and I are not surprised to find Paul and John arriving after we start supping our pints. We have arrived after 27m and about 15 minutes after The Moderates. 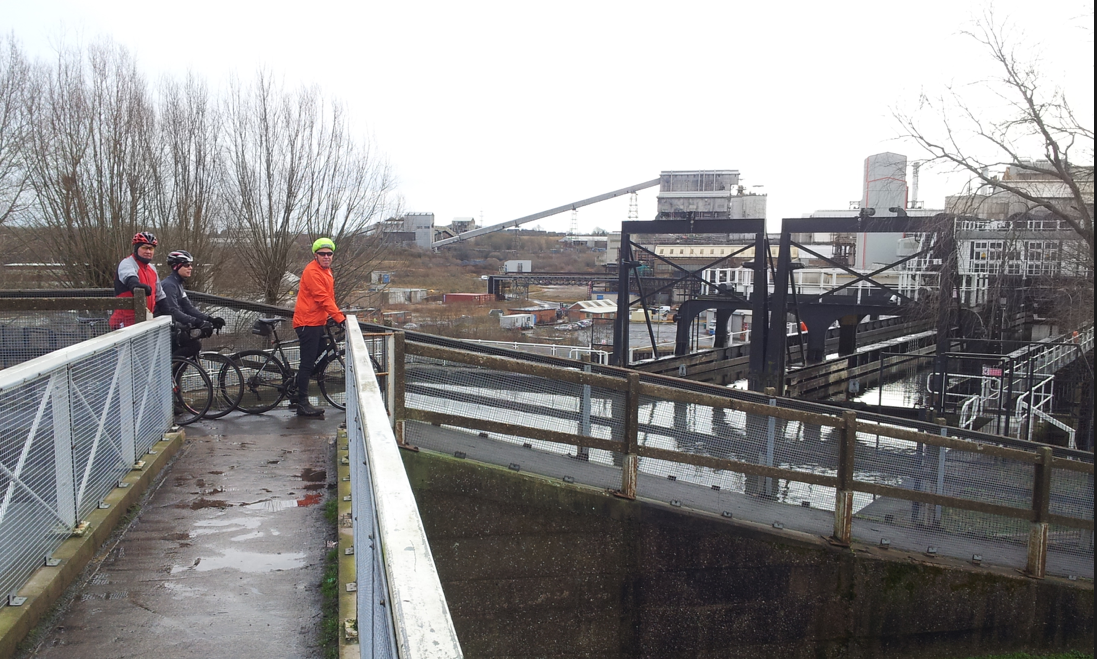 The pub looks after us well, as we all tuck in to decent fare and use the hot radiators to dry out the “waterproof” gloves. Steve T repairs the puncture and elects to go back to Manley with the Moderates. The journey back, thankfully in the dry, takes us for a brief stop at the Anderton Boat Lift and then out to Weaverham and a quiet run down to Sandiway. Here we elect to go straight back to Chester so take the main drag to Kelsall. John splits off to power down the bypass, Saughall bound. We three take the old Kelsall road, and then loop out via Barrow to find the Greenway. The route back to Manley would have been 47miles but to Chester it was mid 60’s. As ever, it’s the banter and the other riders that take your mind off the rain, pain and the mud to make the ride thorough enjoyable.
See route map and/or gpx file download.
CA