Leaving home today was the first really severe frost with Belle Vue lane like an ice rink so extra time and care allowed.
I cut through Christleton and passed the Church along Long Lane where I joined up with Dave H Jim D and Trevor. The Ice Cream Farm was our venue for morning coffee and we arrived without incident.
A route had been planned afore hand but when offered to Tom and John for a brisk ride it was met with disapproval, for the pair had ridden an Audax on Tuesday over a similar course and were not keen on doing it again. A quick revue for route was looked at and off we set with a welcome addition of Dave P on a solo ride and Ken.
It was now warming up as all riders set off from the Ice Cream Farm together.  At the crossroads we split from the moderate riders and headed towards Beeston, I did not have a route on the Garmin for a ride so made it up on the bike and rode along Stonehouse lane passing Peckforton to Bulkeley ending up on the moderately busy A534. We headed left to Ridley without too much traffic passing. We were soon on the quiet lanes heading out of Bunbury and I decided to stick to our normal route to Nantwich and was considering where to go for lunch.
As we had recently visited the hostelries around here the Badger Inn at Minshull Vernon came to thought. It is one pub we often pass but never visit so after arriving in Nantwich we took the cycleway following the little river to arrive at Rees Heath round-about taking the B5074 road to Minshull Vernon arriving at the Badger for 12:15. 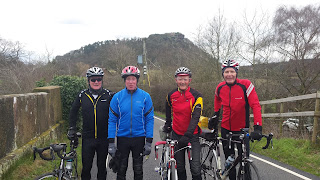 It is a very smart inn with good beer and cheap soda drinks but meals a little pricey but very good quality. Chicken pie and faggots enjoyed and after plates cleared we set off in still blue skies. Arriving at the little bridge after passing the Shady Oak pub we stopped for a photo shoot with the castle as a backdrop. Not something we often do.

We were riding at a fair pace from the photo shoot to Tattenhall lane where the group decided to up the pace for the final romp over the line at the Ice Cream Farm – John clocked 50+k for the mile sprint with Dave P hanging on his wheels.
A deserved tea and cake was enjoyed although we must have put on weight today rather than lost any!
A pleasant 40 miles, plus the journey to and from home, in a good dry if somewhat chilly day especially after starting after the stops!!
Hope the brisk group has the company Dave and Ken again soon.
See route map and/or gpx file download.
ID