Meeting up at Manley Mere today the weather is still warm and wearing of shorts still obligatory although sleeved shirts an option.There were a large group of riders already assembled at the café so two groups available. Three riders had felt the tarmac at the entrance to Manley today and Clive was one of them so he was going to join the Mod’s. The Brisk group were Tom, 2 x Johns and myself. Always looking to try new locations and roads, a route to Macclesfield via Alderley Edge was proposed and accepted. When discussing the route with the team, Dave Mathews, who was enjoying a coffee morning after his French cycle tour, made reference to the Wizard Inn. I had never heard of the place but our group captain Clive had.
As our determined time for departure approached, all riders left the café and the Mod’s were taking a route to Gt Budworth to stir the locals up with loud chatter and boyish behaviour, whereas the Brisk group had a delay in departure as Tom had a rear flat. After nearly ripping his nail off fighting with a tyre lever, we were ready for off 10 minutes later and headed off towards Mouldsworth turning left onto Delamere lane, another location where Clive has felt the tarmac but with no serious injuries to note.
We ride the usual roads running parallel to the main Kingsley – Crowton B5153 which are much quieter, and continuing through Hartford to Davenham. It is then to Lach Dennis and Lower Peover before we venture on the lanes to Alderley Edge. On the Strava app there is reference on the approach to Alderley as “lets go waggin” although passing through the town we didn’t spot anyone famous although a comment from John W was “Now there's a real car” as some silver streak went by!
It is here that we had our only ascent of the day which I now know as Wizard Hill, and, after puffing up this 6.8% stretch of road, we pass “The Wizard Inn”; so now I know where another ride will be heading in the future. From the summit, it is a great down-hill run into Macclesfield and we really burn the tarmac in our haste to get to "The Society Rooms" which is a Wetherspoons hostelry.
We cycle through the town and arrive at our lunch stop. As usual this establishment is up to the mark with two steak and kidney puddings, chips, peas and gravy lunches for £7.99 and a free pint of golden ale from Tom made a really good meal. Our food is quickly served and devoured, and we are ready for the off again. I did mention to the group that as it was down hill to the town it is probably up hill to get out but, after a good lunch, it was nothing to worry about.
From Macclesfield, we rode on new lanes passing through the villages of Lyme Green, Gawsworth, and Marton before arriving at the outskirts of Holmes Chapel. We were heading along a lane and could see the end was a farm yard. A car was heading towards us so we flagged the driver down to enquire if there was a continuous route – although she lived on the farm, she advised there was a right of way through, but had no idea where it lead to as she always drives! Very pretty though, and a blonde driver. Making a U-turn, we retraced our sat nav route and did the usual Right and Right and within a mile we were back on track and riding again through Davenham completing the figure of eight circuit. 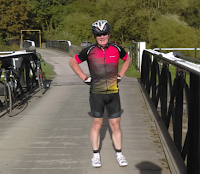 We stopped for a photo on the bridges over the Weaver before heading on to Whitegate and Little Budworth then the uphill lane passing Rose Farm café and the familiar route back to Manley. We turn left at the cross roads and head home for Chester and completing 79 miles to and from Manley or, for Tom, 110 miles to and from Shotton. 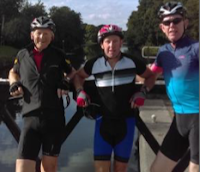 A comment was made at the start of our ride today that we should enjoy the ride and stop racing around the country side. Speaking on behalf of the Brisk group today, we have all ridden in excess of 80 miles and enjoyed every mile.

We still enjoy banter as we ride. Not racing around, but riding at an average today of 16mph, and all within our comfort zone. John M, since joining the Brisk group, is now a rider who enjoys a more consistent pace and exploring more countryside.