Kate and Macca were already in the Seaview Café when Keith, George and myself arrived, after a quick and trouble-free motorway journey. Keith Metcalf soon joined us. Keith was brought up not very far east from here. The six of us set off at 10.30a.m. for the public conveniences on  Grange promenade. The weather was ideal, and I warned the troops not to overdress at the start, as the first climb to Cartmel would soon have them well warmed up. We wound through Cartmel with its ancient Priory, pretty square and picturesque race course, and started climbing again, before an exhilarating plunge down through Low Wood and on to Haverthwaite. The little lane threading up The Rusland Valley was quiet and beautiful.  The climbing through Grizedale Forest became challenging, and I began to regret the half bottle of red, and watching football late the night before.  The others were politely patient as they waited for the heaviest and oldest rider in the group at the top of the climb! We were soon hurtling down to Esthwaite Water, and then passing through the tourists in Hawkshead. The climb from Outgate gave us terrific views across Langdale Fell.

We arrived at Barngates and the Drunken Duck after twenty miles, and sat in the sun tucking in to fish finger sarnies and the like. This is a very attractive spot, and the service and food was just the job for cyclists wanting to move on. 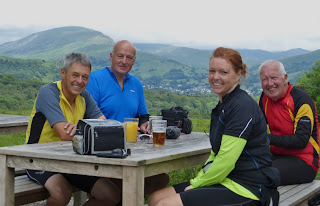 After lunch we had to squeeze past a huge logging lorry on the narrow route over Hawkshead Hill. We flew down to the side of Coniston Water, with fine views of the lake and The Old Man of Coniston to our right. Speedy progress was made on the undulating, green canopied lakeside road. We passed Brantwood, the former home of John Ruskin. This area also provided the setting for ‘Swallows and Amazons’, and the brave world water speed record attempts of Donald Campbell.  Campbell’s grave is in Coniston village, and his story is told in the fine museum there.
We stopped at a wooden jetty in order to walk out into the lake and soak in the tranquil atmosphere and majestic surroundings of water, and high mountains one last time. On Tuesday, Steve Tan had accompanied me on a rehearsal of the route. It had been a particularly warm day, and a group of young American tourists had decide to park their bikes and were having a great time swimming in the lake.  They had invited us to join them, but we weren’t sure that the elastic in our nickers was up to it.  On Tuesday the threatened heavy showers had not materialized, and I finished sitting in the sun with Steve on Grange promenade licking an ice cream, as special steam train thundered past.
Today, Macca had been taking lots of photographs in the knowledge that later it would be a bit wet for pretty pictures.  We made brisk progress on an exhilarating stretch to Lowick Bridge. 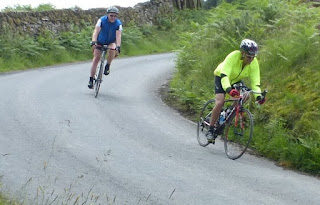 The rain started, so we headed for the wooden bus shelter in Spark Bridge to get into appropriate gear for a hundred minutes of rain. I made an expedient route decision, and we reached Greenodd and the bridge over the River Leven in short order by using the quietish main road. The cycle route follows an old railway line. It is rough to begin with, but is a pretty flat and pleasant way to make progress east. At Haverthwaite we cycled alongside the steam railway and climbed around Great Hagg. The rain hadn’t been too bad, but now it started to bucket down. Macca overcooked a downhill corner, bounced off a bush and fell off.  He appeared to be o.k. though, as where there is no sense there is no feeling!  We decided to escape into The Swan at Newby Bridge. We were made very welcome despite our drowned rats’ appearance. Cake and coffee lifted our energy levels, and George didn’t seem too bothered, as we saw Sturridge score the late winner for England against Wales on the 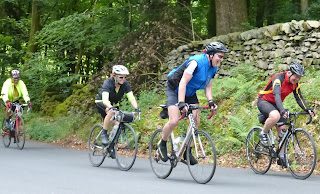 tele. With little prospect of the weather clearing up we climbed up the streaming little lane  to Seatle, wondering if the roads would be passable on this last leg toward Cartmel, and, finally, Grange. Keith Barlow was particularly enjoying the challenge of the adverse conditions, and there was a stimulating sense of adventure in navigating rivers of rainwater in order to get back in one piece on tired legs. We really licked along on the fast stretch past Field Broughton to Cartmel, and then faced the final stiff climb from Headless Cross to High Fell Gate. The rain had stopped, and we were soon back down on Grange promenade. 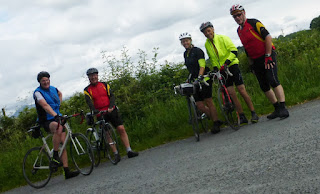 It had been great to have the company of familiar mates, but also to get to know Keith better, and catch up with Kate after four years.  I think we all enjoyed the ride, and I certainly appreciated the support on a day that was bound to have a wet afternoon, and the counter attraction of that big football match on the television at home.  We covered 48 miles or so, with plenty of hills, memorable views and typical easy riders’ camaraderie.