It was a cool start, but the day promised to be dry, sunny and warm. I had two possible destinations in mind when I arrived at the Ice Cream Farm: the Joules Brewery Tap in Market Drayton and the Dog & Bull at Coton. The brisk group had separately chosen the brewery, so for variety I suggested Coton. Our group comprised Liz and Dave, George and Brian Macca. 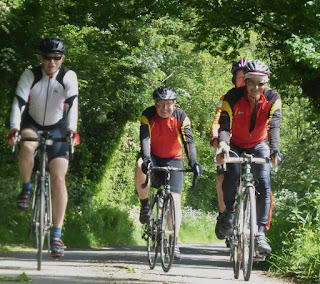 We hit a problem immediately. My combination lock refused to open. After several attempts we gave up and Brian went to find someone with a boltcutter. However, just before one turned up, George put his hidden safe-cracking skills to work and miraculously it opened. Dumping the offending lock in a bin, we headed out through Bunbury and Brindley, then Marbury, before heading through Whitchurch towards Whixall. Somewhere along the route we met an escaped sheep and two farmers failing to get it into a field.  They told us to carry on, which we did slowly pursuing the ewe along the lane. Soon a quadbike roared past, overtook the ewe and turned it round. 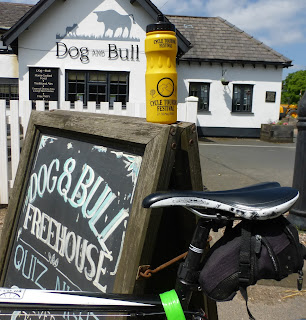 With no more events, we hit the B-road between Wem and Whitchurch and soon turned into the Dog and Bull. We were the first customers and received a warm welcome and thankfully the TV loudly broadcasting “Loose Women” was turned off.  Good food and beer arrived and was consumed accompanied by reminiscences of Sunderland and the North East.

Our return took us back towards Whixall, and we almost immediately came across a couple riding a tandem tricycle. This excited much interest from our tandem and Brian, and after comparing notes; we left them behind heading west to Northwood, and then north through Hanmer before turning right in Shocklach.  At this point Dave asked whether we could pass a café on our return, and I had to admit that I hadn’t planned one, and the ICF itself wasn’t tempting due to expected hoards of half-termers. Dave & Liz knew of a small establishment in Tattenhall village, but this was closed. Old Ma’s was a possibility but would this be open after 4pm? As it happened the ICF was winding down, as evidenced by a great flow of cars on the roads leaving it.  We were quickly served with drinks, but in paper cups, and we weren’t allowed to sit in our usual area, so we finished the day on a bench outside in the fine afternoon.
A good day’s cycling on quiet lanes with few hills in good weather, we clocked up a little over 53 miles.
See route map and/or gpx file download.
SH