Setting off from home to meet Clive in Chester for the ride to Holt we were both kitted out in wet weather gear and cycles with mudguards, as the forecast was a wet day. We arrived at
Hildegard’s for coffee without a drop of rain falling.  Already gathered and still arriving were Jim, Tom, Dave H, Keith, Steve, Colin, Trevor, Liz & Dave on the tandem, Clive and Ivan. The brisk group today would consist of Tom, Colin and Ivan. A route to Queens Head was agreed and we set off.
Leaving Holt we crossed over the Dee and up through the town heading for the usual route to Shocklach and Worthenbury. After a short time it was the first and only call to stop and put on rain jackets, as the rain fell in buckets, but thankfully only for 15/20 minutes. This was the one and only drop!!  Otherwise a fine day in 14˚C sunshine - weathermen!!
We cycled on passing Lightwood Green, crossing the A539 to Doddleston Heath.  We then passed through our first flooded lane giving Tom a dirty bike and face as he was pushing up the rear keeping us together but suffering with spray from our wheels. Riding along Birghill Lane (no hill) was similar to a summer’s day in glorious sunshine, onto the B5009 taking us to Queens Head and the excellent Queens Head pub. We had a good lunch stop here although Tom would have preferred a pub with a bigger heater as he was wet and chilled. 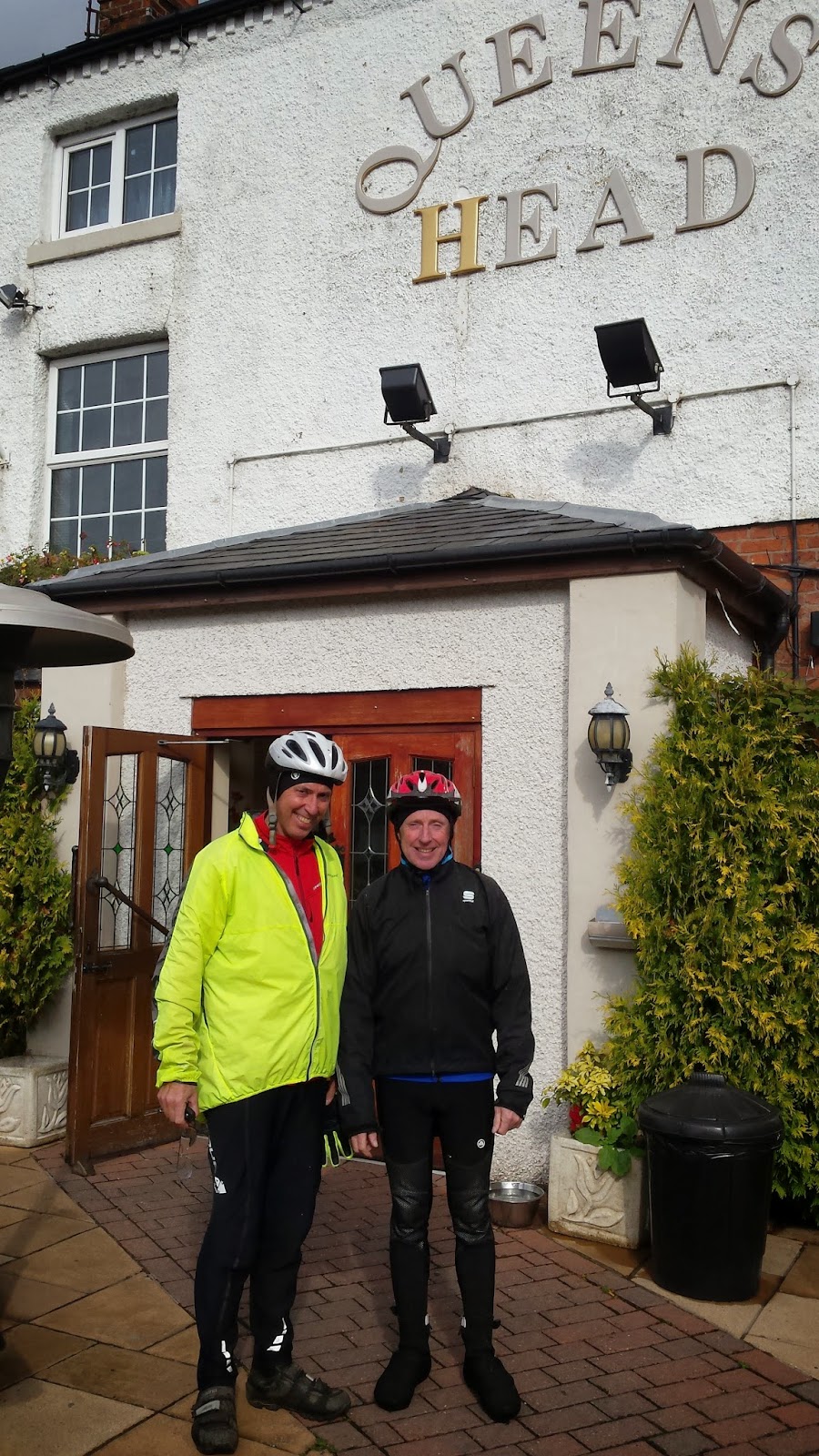 We were soon back in the saddle and taking the left hand lane from the pub, Woodhouse lane, it was a change to have a flat ride for a few miles instead of a climb straight after lunch following the Montgomery canal and on to Hordley. Here we encountered Road Closed but continued to be greeted by nice tarmac engineers who only advised us to travel cautiously which we complied with. After leaving the very bumpy roads we were through Techhill and not remembering the hill after enjoying the sweeping downhill ride to be greeted with the steep climb as soon as you round the bend - wrong gear!
Passing through Ellsmere we were then passing Penley and Horseman's Green when Tom announced he had a mechanical problem - slipping gears. Ensuring Tom's continued progress we slowed our pace to Tilston and Crewe by Farndon arriving in Holt just after 15:00.
Tom decided to carry on home and sort his bike out so Colin and myself set off for Chester and decided to stop at Aldford for a break.
Overall a reasonable dry day and enjoyed the lanes but they are now muddy with farmer’s tractors etc. The standard of road surface is certainly improving with only a few really pitted roads encountered but some lovely smooth lanes to allow a cranked up surge in pace.
Thanks to Tom and Colin for a good ride. 71 miles total journey (51 miles from Holt) and 914 metres of ascent at an average 14.8mph.
See route map and/or gpx file download.
ID