Is this a record? Not getting back to our start in Chirk until quarter to six after only a 38 mile ride. It’s hard to know where the time went, but there are some excuses.
Dave H, Steve T, Keith and myself met in the Chirk Tea Rooms alongside members of the brisk group. No one had brought a prepared route, so I announced that I’d an idea for a ride that involved hills.  This persuaded Dave P (out on his own today) to join us in preference to the brisk group who intended a flattish ride to Shrewsbury.  The idea was to head north over World’s End and back over the Horseshoe Pass. The initial difficulty was working out how to get from Chirk to Trevor, which shouldn’t have been too hard, but delayed our start.  With Dave P’s assistance we tackled some taster hills, before crossing the A5 and the Pontcysyllite Aqueduct (admiring Thomas Telford’s engineering and ironwork) and into Trevor. 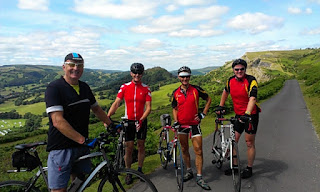 From Trevor a steep ascent led us to the Panorama Walk giving great views on such a fine day. This took us beneath imposing limestone crags into the World’s End valley, where we came to a standstill behind a flock of sheep being shepherded slowly up the valley. Then ascending steeply, we crossed the very slippery ford and up onto Esclusham Moor. Everything was perfect as we descended into Minera and then Dave H got a puncture “from a leaf”. Close examination revealed a tyre worn close to the canvas in several places: “even worse than my tyres” said Dave P, who rescued us from a shambolic team attempt to change the tyre. Somewhat past our usual lunchtime, we pressed on to the Moors Inn at Four Crosses to a friendly welcome and some well received steak pies.
From here we had a fast run down the main road, past the Llandegla Forest, before turning left at the Plough Inn onto a minor road and then onto the main road up to the Ponderosa Café. From the top we took the more attractive Old Horseshoe Pass Road steeply down and on towards Llangollen.  As soon as the canal appeared we transferred to the towpath, passing above the tents and crowds of the Llangollen Eisteddfod. Apparently Burt Bacharach was performing, but we only saw a female choir. A stop was needed so we sat in the sun and ate ice creams.
From Llangollen we continued along the canal, past the Trevor canal basin, back over the aqueduct and onwards through the seriously long and dark tunnel, before emerging by the railway station back in Chirk.
So, the excuses: a slow start, sheep, a puncture and 4850ft of ascent.
See route map and/or gpx file download.
SH