Of the 13 riders who turned up at the Ice Cream Farm on an overcast November morning, 10 decided that a ‘moderate’ ride was for them. A rumoured ride to be led by Dave Pipe never materialised (like Dave himself), so a quick re-think was called for. Andy kindly offered a ’40 miler’ to Audlem and he and Dave M offered to lead as long as someone else wrote it up.
So off we set down Tattenhall Lane and around Beeston Castle into Beeston village. Thence south to Bunbury Heath after which there was a short ½ mile section on the A49 before hanging a left into Spurstow. After this we took Long Lane and Capper Lane into Brindley, where we crossed the A534 going on through Gradeley Green and over the Shropshire Union Canal (Llangollen Branch) at Swanley. South again through Ravensmoor and Sound, crossing the A530 at Newton, threading our way down Healey Lane and Holly Green Lane before picking up Coole Lane for the run into Audlem and The Old Priest House café.
Doubts were expressed that all ten of us could be accommodated by this tiny café, especially since we could see there were already two bikes outside. Andy went on a recce and came back declaring that there was room – just. So we all squeezed in (literally) and placed our orders. Whilst tea and coffees came quickly, the food was a little slower as we’d overwhelmed the kitchen. Nevertheless all were eventually satisfied – especially Dave Heath who played ‘super-sub’ for Dave Pipe by indulging in a pudding. 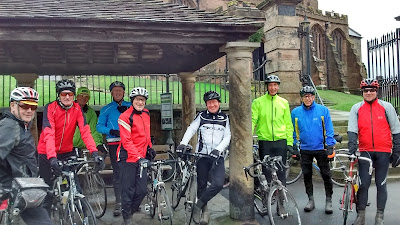 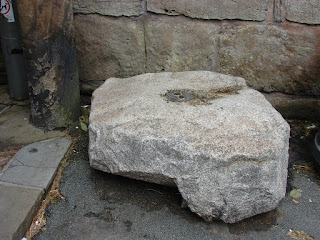 Outside the café, we took the group photo next to the Buttermarket. Brian ‘Macca’ took the time to explain that the ‘Bear Stone’ standing there, was a ‘glacial erratic’. Erratics (a description sometimes used about Easy Riders) are actually pieces of rock which differ from the size and type of rock native to the area in which they rest. "Erratics" take their name from the Latin word errare, and are carried by glacial ice, often over distances of hundreds of kilometres. According to the plaque, this one could have come from Cumberland or the Mountains of Mourne!
Andy decided to put in an extra loop after lunch, so we set off on the Newcastle road before looping around to run through Swanbach and Burley Dam. Then north through Aston where we hooked left through Wrenbury, crossing the canal again at the Dusty Miller. Fortunately the bridge was down, unlike my last visit here in September. Once over the canal we picked up the Cheshire Cycle Way heading towards Malpas and crossed the A49 at Bickley Moss. Here we left the CCW, to take the small lanes going to Cholmondeley Gardens. It’s worth pointing out that many of the small lanes during the ride were quite wet and/or muddy, so everyone got ‘splattered’ and mudguards got ‘clagged up’ on a regular basis.
Heading into Bickerton, Dave M peeled off for home, leaving the rest of us to face the climb over Harthill. On the positive side (this bit is especially for Dave H!), you get the reward of a long run down the other side, leaving only a few zigzags before taking Newton Lane back to the Ice Cream Farm.
A rain-free run of 45 miles at an average speed of 14.0 mph – not bad for the ‘moderates’.
See route map and/or gpx file download.
ST