On a damp but very mild December morning we assembled at the Gallery Tea room.  Jim was only there to wish us Bon voyage and so Clive, Ken, Mike McC, Dave H, Steve T, Steve H, Keith, Bryan and yours truly set out.  Clive led us through Buckley, and on towards Northop utilising an ingenious set of back roads and country lanes, most of which even a local such as myself was unaware of.  As we approached Northop we all knew that the hard climb up onto Halkyn mountain lay ahead.  Undeterred we dug in and after 20 minutes or so of steady, occasionally testing terrain we got to the summit above Rhes-y-cae.
A short team meeting concluded that we form two groups at this point.  Clive, along with Ken and Mike McC would push on to Holywell and the rest of us would aim for the Red Lion at Llanasa at a more leisurely pace.  This pace proved even more "leisurely" than we had planned and a further team meeting decided on a change of lunch venue.  Prompted in part by Dave H's rumbling stomach.  The Piccadilly in Caerwys was our chosen venue. 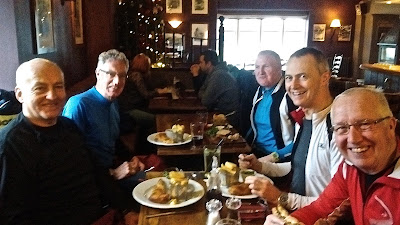 Despite a full car park the bar area was quiet.  Drinks were quickly served and at a £1 a pint for lime and soda the omens were good.  Friendly staff had our food orders sorted and our meals arrived speedily.  The only negative comment came from the potato chip enthusiasts amongst us.  The pub has succumbed to the latest affectation of serving chips in a small wire basket.  A cunning plot to give you less chips was the verdict.  While eating Steve T had a message from Clive to say that the Red Lion in Llanasa was closed.  The cycling gods were smiling on us today.
Suitably replenished we left the pub turning first north and then west.  This convoluted route designed to get us to one of the few crossing points over the A55.  As we approached the top of Rhuallt hill we noticed the field of commercially grown daffodils were well clear of the ground, a mild winter indeed thus far.  Over the A55 we turned east on quiet well surfaced, if a little "clarty" lanes.  I managed to achieve my objective of keeping us off the main A5151 as long as possible.
A short burst took us to the roundabout where the A5151 turns south to join the A55.  We carried straight on through Gorsedd to Pantasaph.  Re-crossing the A55 we cycled past Holywell Golf Club avoiding the suicidal sheep wandering freely on the common land and after a further steady climb regained the top of Halkyn mountain.  The weather had cleared and we bowled along the summit enjoying the fine views across the Wirral.  Retracing our steps down the lanes below Rhosesmor we regained Northop village where I left the five musketeers to make their way back to the start via Northop Hall re-crossing the A55 for the final time.  An enjoyable 42 miles to finish this year's forages into Wales.
See route map and/or gpx file download.
GW
Posted by Gudfadirin at 20:27