The day was forecast to be cold, clear and sunny – ideal for late autumn.  We assembled at Rose Farm Tea Room, which had been refurbished since my last visit – maybe they’d heard we were thinking of going elsewhere.  We were quite a large group (Chris, David M, Ray, Andy B, Dave H, Dave P, Paul, George, Trevor, Mike G and myself), and for once all were out for the day’s ride.

I wanted to try the ‘other pub’ in Goostrey. I’d been a couple of times on CER rides to the Red Lion and never been really satisfied with it, so today we were going to try The Crown.  We travelled out through Winsford and took the main road through Middlewich before heading NE towards Goostrey. The pub had no problem accommodating 11 unexpected cyclists, though we really needed a bit of organising over what was ordered and when it was paid for. Ordering complete, we settled down with our drinks, while a large pot of tea was brought over for Paul and Dave H, who had decided to improvise their own tea ceremony by sitting at opposite heads of the table, requiring tea and milk to be passed up and down. Next we were given linen napkins with the cutlery – not a luxury we Easy Riders are used to.

The food was regarded as being very fine, though it took us some time to complete the lunch as two of us had ordered starters and another two had ordered puddings. So it was that after a long lunch we hit the road again, with the fine weather continuing.  Our return took us through Lach Dennis and Davenham, before dropping down the rough track to cross the Weaver Navigation.  I’d been down this track only a week or so earlier and the pot holes had grown immensely since, probably helped by the heavy rain earlier in the week.
From there we took the Whitegate Way and continued in the direction of Little Budworth, before being forced to a stop when I got a puncture. Dave P took the lead in changing the tube, something I and probably the others are very grateful for, as he took at least half the time I would have done.  By the time it was fixed the temperature had fallen and the sun dropping close to the horizon.  Ideas of a café stop on the way back were abandoned and we pressed on to our start point at Utkinton. 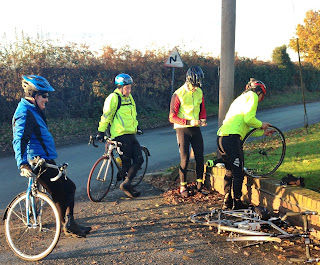 Overall 41 miles travelled on a very fine day, sustained by a good lunch.  Maybe The Crown should be added to our list of favourite lunch stops.