I arrived at Rose Farm to find Jim already there, and the others gradually drifted in: Andy B, Clive, Bryan W, David M, Mike G, Tom and Steve T. There was an air of depression as it started to rain and the weather forecast was discussed – heavy rain, hail, thunder and lightning, swarms of flies, plagues of frogs and locusts! The consequence was that only four riders persuaded themselves to venture out on a full CER ride: Mike G, Tom, Steve T and myself.

I decided on the White Lion at Barthomley, partly because it was the only destination on the CER list of favourite lunch spots that I’d never been to. Initially, due to the weather, we aimed to take the shortest possible route, but as we passed through Cotebrook and Wettenhall, the skies dried up, so we followed the road out to Church Minshull and onwards to Crewe. Leaving Church Minshull, Steve T had his first altercation with a motor car – he failed to appreciate your lane having priority over oncoming traffic does not apply if you are riding a bicycle!

We continued through Wheelock Heath, Alsager and Audley to arrive at the White Lion at one o’clock. It is full of character having been built in 1614, being Grade II listed and appearing in CAMRA’s National Inventory of Historic Pub Interiors. The doorways are low, there is an exposed wattle wall and on display is a list of all the landlords since 1614 (see photo). 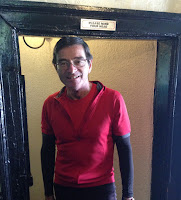 Clive had told us to try the steak pies, but alas by 1pm they had already sold out, along with some other dishes.   We consoled ourselves over a good sausage & mash and sandwiches, while the two ‘francophones’ of the group identified the outward journey as a typical "cedilla" route. (If you want to know what this means you can ask – but it’s really not worth the bother.)  We also looked forward to the CER Moderate Long Ride to Longden upon Tern on the 10th August and noted that there were still places available. 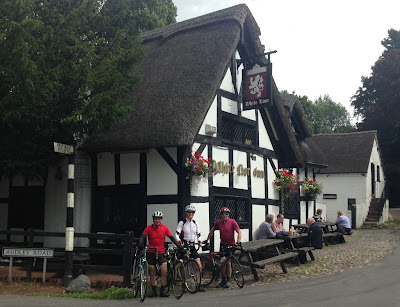 The return route took us through the middle of Nantwich and out past Rease Heath Agricultural College, heading towards Wettenhall.  On this road, Steve T again showed his ignorance of the Highway Code by failing instantly to ride into a ditch when a car behind honked his horn!  At Wettenhall we headed west to make for Tilly’s at Bunbury, and decided to enjoy the improved weather by sitting outside. We soon regretted out decision as our conversation was drowned out by the noise of a stone cutter being used for a patio opposite.


From Tilly’s Tom and Mike headed back into Chester, while the two Steve’s made their way back to Rose Farm clocking up a total of 61 miles on a great day, and for me, very much a brisk ride.