I had created this route using http://cycle.travel/map as Ken had told me that it’s easy to use. Yes, it is easy to use, but as you will see, you need to check the route it generates, otherwise you can end up going down bumpy tracks or private roads.

From the throng of CERs (including Clive – good to see you if only for coffee) gathered at Meadow Lea on a bright but chilly morning, six offered themselves for the ‘brisk’ ride; Ivan, Paul, John M, Nick (on posh new bike) and Dave M, who said he’d come with us at least part of the way.

The first part of the route, along the A56, is pretty dull, but we were soon in the lanes, passing the entrance to the Windsurfing Centre at Manley, one of our erstwhile starting venues. The road along here is very rough and the vibrations caused my rear mudguard stays to come off the retaining lugs, a problem I’ve had before and one I thought I’d fixed. After a quick stop to put them back on, we continued, only for them to come off again soon after. So we stopped at the top of the hill on Sugar Lane, where Dave M delved in his saddlebag and provided some cable ties with which to make a lasting repair. Having fulfilled his role as ‘support crew’, Dave opted to do his own thing from here as his heart pacemaker doesn’t get on very well with hill climbing.

We pressed on through Mouldsworth and the undulating road through Delamere Forest to Norley, Cuddington and Sandiway, where we diverted from the route suggested by cycle.travel to avoid a long, bumpy run alongside the A556 Northwich by-pass. Instead, we headed towards Weaverham and then swung right through Hartford (and the first of many road works) to join the ‘cycle track’ (I use the term in the loosest possible way) next to the A556 at Hartford Bridge. We quickly left the main road ran through Davenham and out into the countryside on NC573. Crossing King Street (A530) there were more road works for the installation on new gas pipes. (I could bore you with the colour codes used for pipes to carry different services – gas, water, telecoms etc.,…. but I won’t!)

We followed NC 533 to Goostrey, passing two more places where is said ‘road closed’, but which we could pass on bikes – even if John had to carry his at one point. From Goostrey we turned north through Withington Green and the radio telescope at Jodrell Bank which is impressive every time I see it. A short run down Basemill Lane to Peover Heath brought us to ‘The Dog’ and our lunch stop. The pub was nice and warm, but quite busy, as it still seems to be half term hereabouts. So, we had to wait a while for the food, but it was good and filling when it did come. There’s a portrait of ‘The Dog’ where we were sitting and John M found is disconcerting, as it seemed to be dressed in women’s clothing and staring him in the eye (see photo) so he didn’t know what to make of it. 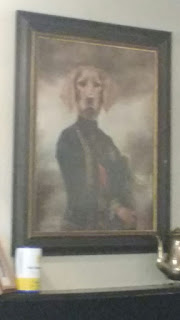 Setting off after lunch, the temperature had dropped significantly, the sun being partly hidden behind clouds. We pressed on, but I now found the cost of not checking the proposed route more carefully as it wanted to take us up the driveway to Peover Hall, a Grade II* listed Elizabethan family house dating from 1585. During World War II the house was requisitioned as the HQ for General George Patton of the United States 3rd Army to train for the D-Day landings in 1944. It is open to the public, but probably not for passing cyclists, so a diversion was called for which took us through Goostrey and back along NC533 to the A50. After a short run towards Knutsford on this road we turned left for Lower Peover and got back ‘on route’. Going through Lower Peover we came across yet another ‘road closed’ section. Here, Nick had a contretemps with a lady in a 4X4 who, it seemed, could neither read the road signs nor execute a multi-point turn when she reached the closure point. At the far side of the roadworks, John had an altercation with a traffic bollard. He claimed he was looking at his Garmin, but Nick reckons that there’s something of the ‘Bermuda Triangle’ about this part of the world. In any event, no damage was done to man or bike and we were soon on our way again.

Crossing the M6 at Plumley Moor, we were reaching more familiar territory, but I was beginning to feel the pace, taking refuge behind John whenever I could. We negotiated the tricky crossing of the A556 at The Smoker and were soon in Wincham. Entering Neumann’s Flashes, Ivan stopped to answer a call of nature whilst we carried on. However, there is a right turn along the way and Paul suggested that Ivan might not see us take it, so he went back to look for him. A good job too, as Ivan wouldn’t have taken it without Paul’s guidance and he might have been lost forever in the flashes. The path emerged on Marbury Lane, once a through road owned by ICI between Anderton and Northwich, but now closed to cars. Exiting Marbury Park, the route took us through Comberbach, Dones Green and along bumpy Marsh Lane to Dutton and the A533. We took the lane through Aston village to reach the top of the hill at Sutton Weaver. Here, Ivan declared that he was not stopping for coffee in Frodsham; he needed to get home as he was going out that evening. As it was just after 4pm at this point, John M, Nick and Paul also decided to head straight back, which gave me the excuse to peel off half way down the hill and go straight home. I had ridden from home to Meadow Lea in the morning, so can justly claim to have done the full ride.

This was a total of 67 miles on a dry but cold day using some new and some familiar lanes. At least there was no need to jet wash the bikes this week!