A large gathering of Easy Riders assembled at Meadow Lea Café and it was good to see Clive recuperating after his operation.  In the absence of any other suggestions, I put forward the idea of the Black Dog in Waverton. I feel that when we start our rides from a central location such as Mickle Trafford or the Little Roodee, as was, it is an opportunity to visit venues closer to Chester than we would from our outlier café starts.  Given that the Black Dog was only 5 or 6 miles away, it required a fairly circuitous route to make a day of it, and coincidentally one that passed close by the homes of Jim, Ivan, the Pipes and David M.  It was also a route that, in response to comments from last week, would be very flat.

Trevor set off, very briskly, leading Keith, Mike G, Andy, George, Bob and myself, towards the Old Dee Bridge in Chester. Pretty soon we had the first of our encounters with hedge cutting, and we carefully wheeled our bikes over the debris. We crossed the bridge and I took over. Past West Cheshire College towards Ecclestone, and then down the road towards Rossett.  We diverted up the Straight Mile and met a host of snowdrops.  Mike became quite poetic and took several photos.  Then it was along Darland Lane to approach Holt and onwards to Aldford, and through Bruera. Bob was getting carried away by our flat route and sped ahead, missing the right turn to our destination until Keith brought him back. 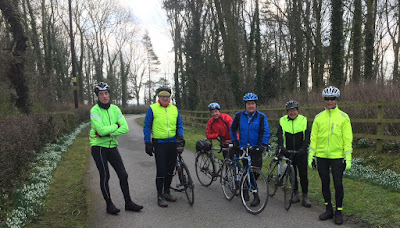 The Black Dog was already hosting three parties and we had to suffer a one hour wait for food – one of the consequences of mid-week lightly staffed kitchens being hit unexpectedly by too many customers.  When they did arrive the portions were substantial and the prices reasonable.

From Waverton we passed through Hargrave and by the Inn at Huxley, still not open, four years late after a major re-build, but looking rather splendid. Then it was onto Tarporley, which we left by the Utkinton Road and the only hill of the day, before heading towards Duddon.  We then met two sets of tractors hedge-cutting and were forced again to gingerly wheel our bikes around the thorns.

We crossed the A51 at Duddon and shortly after things went awry. Mike had stopped to sort out a piece of glass in his tyre, and didn’t see four of us turn right towards Okell’s Garden Centre. Noticing something wrong we stopped and then saw, over the hedgerows in the distance, Mike, Andy and Keith following a different route, back towards Waverton. Having every confidence in their navigation skills, George, Trevor, Bob and myself continued along Platts Lane and then into Oscroft. Next we crossed the A556 and passed through Great Barrow, before meeting the A56.  We followed this back to our start, while at the same time passing Keith who was now heading homeward.  The missing three had made it back to Meadow Lea about 20 minutes before ourselves.

We had travelled about 46 miles on a dry, mostly sunless day with light but cold winds. According to the mapping app we had climbed less than 500 meters.  It was the first time in many weeks that the bikes came back as clean as when we left.