The summer equinox, the longest day and the first day of summer, and yet it felt more like autumn.  The temperature had dropped and there was a strong NNW wind. At Delamere Station Café, Ivan and John W were on a brisk ride, Dave & Liz P were on a leisure ride, which left Andy B, Bob, Clive, George, Mike, Neil and myself as the moderates.

We usually cycle out to Goostrey from Rose Farm, so it made a change to go there from Delamere.  The route was largely familiar: out by Acton Bridge, Combermere and Great Budworth, where the through road is still closed to cars because it has been undermined by moles.  Plumley was next, where I noticed that the Plantation Garden Centre had been renamed the Plumleys Garden Centre (perhaps because of the connotations of a plantation). At Lower Peover crossroads, instead of taking the familiar B-road, we went straight on and came across the Tree of Imagination. This is an intricately carved, spectacularly decorated and inventive transformation of a large old oak stump: www.lower-peover.co.uk/lower-peovers-tree-of-imagination/ 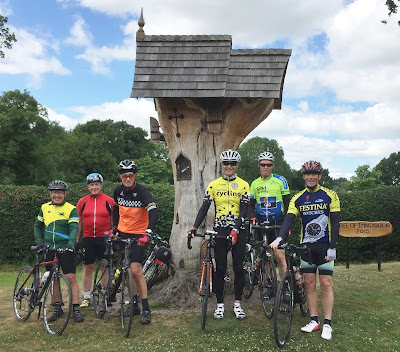 A few miles later we emerged back onto familiar lanes and headed into Goostrey and to The Crown, a favourite destination. I noticed under the menu heading of “Pub Classics”, they offered Avocado, Feta & Pomegranate Seed Salad!  We all chose more traditional meals from the £6 lunch menu of substantial fare.

The route back took us through Lach Dennis and, even though we hadn’t travelled far from the pub, into the café at Shipbrookhill Farm. Here about half of us chose the ice cream despite the temperature.  After Davenham, we took the rough track from Moulton to cross the Weaver Navigation, not much worse than some Cheshire lanes.  Then, taking advantage of the dry ground conditions, we followed the Whitegate Way towards Oulton Park.  Here we had the only technical difficulty of the ride when a twig got stuck on Andy’s drive belt and pulled it off. Fixing it was a bit more complicated than putting a chain back on, but a lot cleaner.

At Cotebrook, half the party headed off towards Waverton and points homeward. Andy, Mike, George and myself continued northwards towards Delamere, though I turned off to slog up Heaths Lane. We’d had a relatively short ride for the day of the summer solstice, but it was enjoyable. The circuit from Delamere Station was 46 miles.