I arrived first at Delamere but was soon joined by droves of Easy Riders on what promised to be the best day of 2019 so far as weather was concerned.  The early cold mist soon cleared to leave a glorious blue sky and sunny 13C all day.  It was my first CER ride for 6 months, so it was good to catch up with the gossip and see Steve T back in the saddle. (More of him later)  Steve H kindly offered to lead a ride from his Garmin to Little Bollington, which I notice was visited as recently as last August.  It must be good I thought, not having been there.  Our route out took Dave H, George, Andy, Keith, Steve H, Steve T and me out via Acton Bridge, Arley Hall, Knutsford to Tatton Park.  The good weather had brought out trippers in their droves.  Soon after we passed the Bridgewater Canal, which I was surprised to read is still privately owned with its own website.  Two articles made reference to it NOT being the oldest canal in England, but both left me dangling to know which one was. 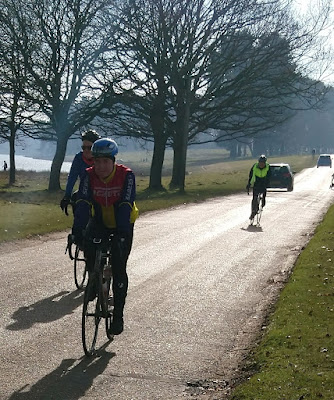 Our destination for lunch was “The Swan with two Nicks,” NOT necks as I heard. It’s in Park Lane, WA14 4TJ 0161 928 2914.  On its website homepage, it shows a photo of ITV’s free advertising for the current drama “Cold Feet” with Pete on a bike ride.  Though busy with diners, we were soon served an ample sufficiency for £7-8. 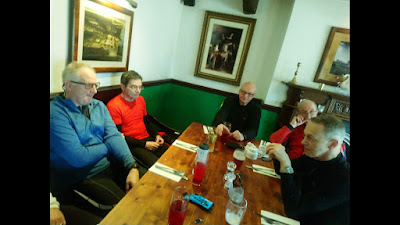 Our return took us first via Lymn, then through the disused WW ll RAF Stretton, originally built to protect both Liverpool and Manchester from enemy aircraft.  It ended the War as a R N A S, supplying carriers with anti-submarine aircraft.  Cycling onwards through Whitley, Little Leigh and Acton Bridge, Tanny deservedly won KoM.  We dropped various riders off, leaving just Steve H and me to return to the Station cafe.  The least I could do after this enjoyable ride was buy him a well deserved coffee, having covered 48 miles at 12.5 mph average.  Thanks Steve