There were eight of us gathered at Hawarden. Spiros was as friendly as ever, and told us of meeting Harry the Bike and his wife in York! Some had battled against a strong wind in order to arrive in time. Jim was off to Malpas, and John was preparing for a mega ride, so he was doing a little loop of his own, probably taking in Merthyr Tydfil! It was going to be one group, comprising the two Steves, Clive, Ken, Andy and myself. Steve Haywood was good enough to lead. Heavy showers were likely, and it was certain to be really windy on the tops, so our destination was open to adjustment en route.

On reaching Northop we spurned the challenging climb left, and headed past the horticulture college before climbing up the escarpment and reaching Halkyn Helygain. Through Whitford we turned left for further Welsh steep hill pain in order to reach the pretty village of Llanasa. This area is very attractive, and the weather was quite warm and brightening up. 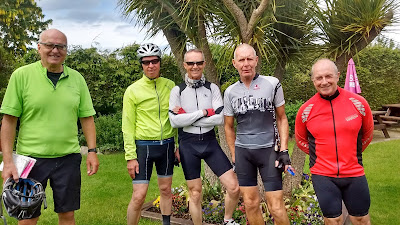 The service and food were of the usual reliable high standard set by the Eagle and Child at Gwaenysgor. After lunch we went up the road to take in the panoramic views high above Prestatyn. As a child, I remember having happy family holidays at Prestatyn Holiday Camp, which was very Hi-de-Hi! Until fairly recent times the old air control tower was prominent from this vantage point (the camp had been an R.A.F. base originally). I remember putting a threepenny piece in the turnstile in order to climb the steps to the top of the tower. Even in those days I enjoyed riding around the camp on a four wheeled social bike with a bench seat for three. My dad was usually the fall guy to help with the pedalling. 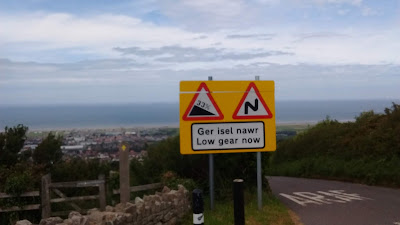 Back to the present, we didn't fancy the 33% descent ahead, so turned around to make for Trelawynd at the far side of Gop Hill. Our return took us over the A55, and alongside the field which is often flooded with the yellow of blooming daffodils. Our route continued through Babell, but after  crossing the B5121 we turned south, dropped down to Rhes-y-Cae and had a hard, longish climb up to Rhosesmor (at least that is where I think we where!) We continued above Northop, across to Alltami, through Buckley  and finished with a fast run down the wooded curves of the A550 to the Hawarden car park. A very hilly day, but in finer weather than we  had expected. Thanks to everyone for their patience with my relative lack of pace. I am now three days into a diet!