The skies were ominously dark as we all set off from Waverton at 0800. There was a brisk ride led by yours truly, and a moderate ride led by Steve H. However, as there was no rush to get to Cafe Bon Sol in Whitchurch, we all set off together towards Tattenhall. It became clear at the back road to Bolesworth Castle that we should formally split up. The Brisk Group consisted of Ivan, Ray, Ken, Steve T, Nick, and myself. Mike G decided to joins us as well just as John W appeared (he had not turned up at the start due to bike issues). So up and over the various hills with very black skies, we duck and dive our way to Bon Sol just before the rain starts. The cafe had opened up a little early to accommodate us and bacon baps were very much in evidence.

As we are ready to leave, the Mods arrive ready for their protein top up. Mike G decides to swap teams as we head out to Ightfield and on to Market Drayton. Nick gets a rear wheel puncture as it starts to rain, but tyre fixed, we seem to outrun the rain. There is then a long run down quiet lanes to Eccleshall. Out through pretty Eccleshall, it is now a long loop north passing HMP YOI Drake and Swynnerton Training camp (a WW2 former munition factory, now Army training camp) via Cold Meece and Yarnfield (where we have ridden to in April 2016). It’s really downhill now into the suburbs of Stone at 51 miles, 1230 and The Poste, a Wetherspoons pub.

As ever Wetherspoons doesn’t disappoint and we are soon fed and watered and preparing to leave as the Mods arrive. The weather hasn’t warmed up and rain threatens as Ivan leads us onto Barlaston and the start of 12 miles of canal side riding. Both Ivan and I notice that there has been a lot of housing and offices built where derelict factories once were. We had both been on the June 2011 Long Ride to Stone (with Mike G) and really noticed the difference. We pose for a few photos along the way, ending up at the Harecastle Tunnels - one now working, the other closed but both 1.5 miles long. 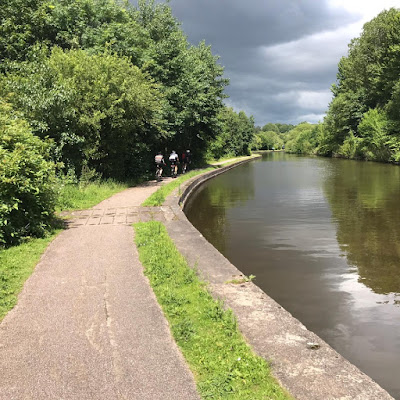 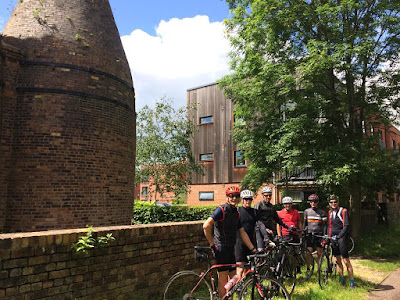 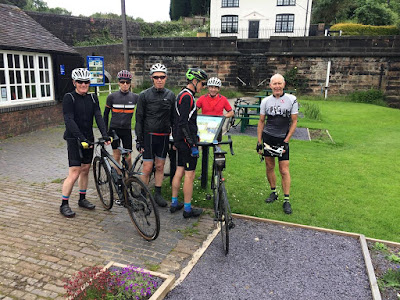 It's a long pull up to the busy A34 roundabout at Talke, at 669 ft the highest point of the ride surprisingly. Downhill into Alsager, we are soon out and crossing the railway at Oakhanger, eschewing the White Lion at Barthomley, on our way into Nantwich. An unconventional approach via St Mary’s churchyard finds us at Costa Coffee ready at 81 miles for a top up. We are all ready for the final familiar leg of 21 miles back to Waverton. Steve T, who threatened to jump ship at lunch, is still riding confidently as 101 miles comes up at nearly 1800. Surprisingly, there were 4500 ft of climbs! The Mods are 90 minutes behind us and just leaving Nantwich, and, as Steve has Dave H’s car keys, he joins Ken, Ivan and me for a pint in the Ring o Bells in Christleton.

So a great day out, and my thanks to an enthusiastic riding group who took turns on the front right to the end. We managed to dodge heavy showers (as had been in Chester apparently) and only picked up a little rain - it could have been warmer, but hey almost the Summer solstice so why would we expect it to be sunny and warm!

The mods rode the same ride as described above, so I add here only a few incidents that demonstrate the slick professionalism of our mod outings. Both groups were to cycle as one to the first stop at Whitchurch.  Unfortunately heading up to Brown Knowl, Dave H's front mech slipped sideways and necessitated a quick fix, but delayed 5 of us arriving at the cafe.

The rest of the morning was uneventful and we enjoyed the lanes to our lunch stop.  There was good value fare at Wetherspoons and after we took the long canalside ride, though I think we joined it a little earlier than the prescribed route. 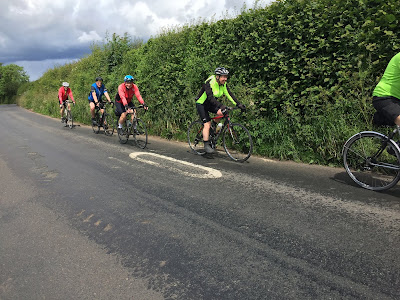 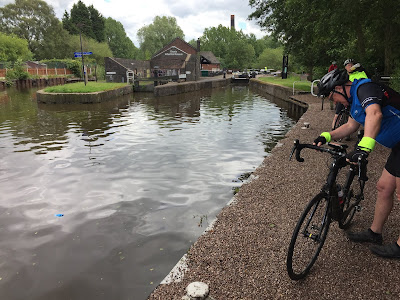 Everything was uneventful until we left the cafe in Nantwich. But somewhere before Swanley bridge, Mike at the front and me as the last man lost touch with Keith, George and Dave. After waiting and some phone calls, Mike, Andy and I continued on the planned route, eventually arriving at our start point to find the rest of our group already there.  They had taken the more direct A41 for part of their return.

I think we all enjoyed the diversity of the route, the well-planned stops and our luck with the weather.  Many thanks to Clive for his planning and organisation.