Ten of us turned up at Rose Farm for today’s meet. Jim and Bryan were out for a short ride, Andy B was in for a short fifty, Steve H in civvies was unfortunately still suffering from sciatic nerve issues (Get well soon). The remainers containing Andy W, Dave H, Steve T, Dave P, Bob, and myself set out for a hot, sweaty ride with thunderstorms predicted for the afternoon return.

Where are we going? What was the rallying cry. Ravensmoor and Norton in Hales were mentioned and I suggested Audlem. Audlem it is, you can lead, that means writing the report and logging the route.

Of we went going via Oulton Park following the sun at a pace so the ’Chatter Box Club’ could have a full discussion on the meaning of life, cycle equipment and other issues. Near Calveley, Andy W decided to return home. At Nantwich we had a tour of the water park before heading south via the A530 and Hack Green where a warm southerly head wind was experienced. Copious amounts of water were consumed.

Our arrival at The Lord Combermere coincided with a number of others all wishing to eat. A long wait was had for the food, and whilst enjoying a drink our discussions ventured onto the demise of the Royal Navy and as we were gentlemen of mature years ’Our Ailments’. The food arrived and was excellent as was the Shropshire Gold.

I planned the route back a few minutes before we departed. It was to head almost due north running parallel with the predicted thunderstorms (I hoped). As we passed through Sound a storm was ahead of us but farther west. The roads were wet and with the heat and evaporation, it became extremely humid. On through Brindley, at Bunbury, Bob departed from us whilst the remaining four returned via Tarporley, stopping for a coffee at the Fire Station café before returning to Rose Farm. Overall about 45 miles covered in dry weather, for those cycling from Chester area 60 miles plus. 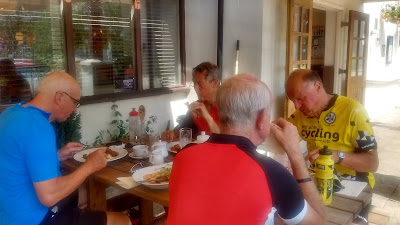 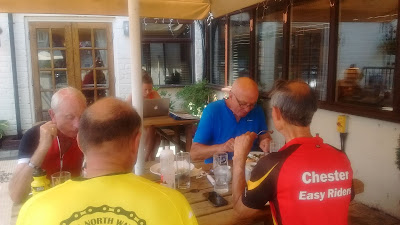