It was an excellent turnout at Alison’s Kitchen of mods and briskers.  DaveH not having his maps, requested suggestions. It was quickly agreed we would go to the Black Bear in Whitchurch following a route DaveM and myself conjured up some time ago on a previous visit. Jim, DaveM and SteveH were out for morning rides as ten of us set off (Mikes D&G, SteveT, Fiona, Neil, Trevor, Bob, George, DaveH and electric Peter). Neil had raised concerns about mud on the road towards Clutton. As it had recently been dry, I decided to take the risk.

With Trevor leading we were soon in Tilston. With no one volunteering to try the stocks, we quickly made our way onto Threapwood following the CTC Spring 50 route. Only one incident so far, we had the rare experience of local hedge trimmers sweeping up their messes. Whilst DaveH was thanking them, those behind nearly piled into him on a muddy surface as he forgot to advise he was stopping.

Onto Hanmere area and whilst making our way to Bronington, we encountered the epi-centre of muddy roads where we stopped, allowing Bob, Fiona and Neil to remove the accumulating mud from their mudguards. I was accused of trying to emulate Clive A. Where were those stocks?

As time was getting on and it would take about an hour for all of us to be fed and watered at the Black Bear, we headed for Whitchurch rather than divert to Whixhall Moss area as originally planned. The temperature by now had risen to a tropical 3.9 degrees C. 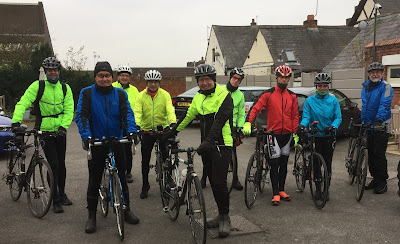 Lunchtime conversation covered ISharing apps/Life 360, BBC Four programmes and other issues, yes including politics as we thawed out and enjoyed the lunchtime food and drinks (Salopian Gold was excellent).

We departed Whitchurch at about quarter to two and because if any of us got a puncture, I decided on a straightish route back via Marbury, NCN 45, Harthill finishing with a lovely run down to Tattenhall. Arriving at three pm we had covered about 36 miles. It left sufficient time for those from farther afield to return in daylight and the café hoppers, a further opportunity for some light refreshments. On a positive outcome, with us all having muddy bikes it enabled us to gain greater familiarisation with our trusty steeds.