There had been a heavy frost, though a sunny day was forecast, when CER members assembled at the Castle Bistro in Chirk. Ivan and Nick made up the brisk contingent, and we had six moderate riders: Bob, Steve T, Trevor, Mike G, Andy B and myself. Over coffee, Andy was sharing a few interesting facts about working in the nuclear industry: in order to test radioactive contamination, some staff had to provide 4 litres of their urine, in order that it could be reduced down to a concentration where alpha particles could be counted!

In choosing a destination for today’s ride, I remembered that on other rides we had often passed an interesting-looking pub on the banks of the River Severn.  So it was that our destination became the Royal Hill Inn, midway between Melverley and Pentre. We set off on one of our regular routes from Chirk, through Hindford and Welsh Frankton. Caution was in order as we came across patches of ice which we passed gingerly, and sometimes dismounted and walked around.  We hoped these would disappear as the day progressed. We cycled on through West Felton and Knockin, past the radio telescope dishes and beneath the helicopters always hereabouts due to the local military base.  Before long we were seeing signs to our pub.


I can’t explain why it’s called the Royal Hill Inn as the locality is fairly hill-less, but maybe it is connected to the Civil War battles in the Shrewsbury area. The pub itself has an ideal location looking south over the banks of the River Severn towards the Breedon Hills in the distance. The interior retains a collection of small rooms - a servery, a snug and an old parlour. We sat basking in the sun shining through the windows and chose our refreshments.  The main courses are all under £10 and quite adequate – we were told that more chips could be provided if we wished. My pint of Three Tuns was in very good condition. We were discussing rides we had done in the area, when someone turned over a beermat to reveal the fact that the River Severn is 72,355 canoe lengths long! This brought the discussion round to canoe trips. 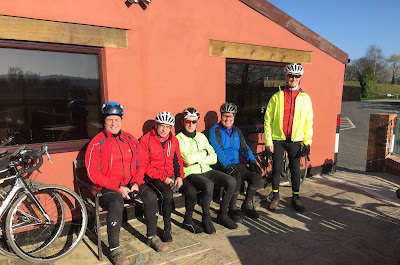 Soon it was time to move on.  Mike G suggested that we should visit St Peter’s Church in nearby Melverley.  This is a delightful timber wattle and daub structure, built in the early 15th century after Owain Glyndwr burnt down the previous one. In the early 1990’s a major effort succeeded in protecting it from falling into the River Severn.  As a result Melverley was given a “most motivated village” award. 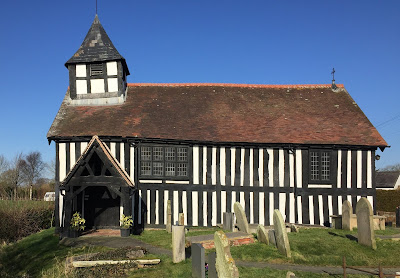 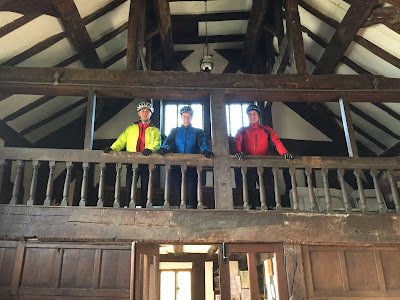 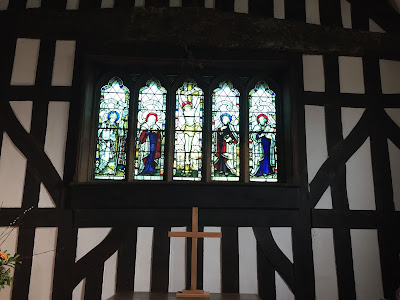 From here we headed north through Maesbrook and Maesbury to join the road through Whittington to Gobowen. Before entering the town, we headed west, past the Robert Jones and Agnes Hunt Hospital, very familiar to Steve T, and then picked up the lanes to Western Rhyn and the Ceiriog valley.  From here we climbed up into Chirk and back to the Castle Bistro. 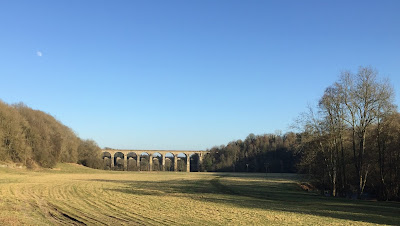 It had been an exceptionally good ride. The weather turned out to be excellent once the frost lifted. Apart from some muddy lanes around Chirk, the roads were generally clear and there was little wind. The route held plenty of interest, especially the church, and the pub was a notable find to which we will return. Total distance travelled was 42 miles.

Club Rides have re-started - Thanks to members being flexible, we were able to arrange three separate, enjoyable rides in small groups last week. Our second ' whole club' start since lockdown will take place at Alison's in Tattenhall this Thursday, 13th.August (10a.m. for 10.30 ride, as normal). Once again, it would be helpful to know in advance if you are likely to take part, and if you have a route which you could lead if required. Reviewing last week, it could be safer if we stayed alert over social distancing, particularly over lunch and post-ride coffees. The weather for this Thursday is unlikely to be settled, but Alison will try and give us a room to ourselves. There is also outside space front and back if it is dry. Once again, sincere thanks to those who led last week, and to those whose unselfish cooperation enabled the group sizes to be viable. DH (10.08.2020)