Rain and hills were forecast today - and neither disappointed. I had texted a few people (i.e. those not in the Alps, or off to the TdeF or on yet another foreign bike holiday) to see if there was any interest. Six said "Yes" and a further two turned up as well. Ivan and I had taken the train out as had Brian Mac, with Liz, Petar, Steve, Roy and I think Mike G, coming by car - so it was "Snow White and the Seven Dwarves" today. Dave H had advised finding an alternate to the Plantation café so the recently opened Chirk Tea Rooms, next to the Hand Hotel, were duly sampled and gained a gold star (it had a toilet, railings outside to fasten the bike to, decent coffee and very pleasant service).
The route to Llanymynech was "agreed" upon, although no one, except perhaps Mike, knew where it was. The sheep were duly lead out via the back of the town on the Glyn Ceiriog road. A few miles of rough main road found us turning left and up past the site of an ancient Henry II battleground in 1185***. The lane now ran high above the Ceiriog valley before coming down at Dolywern. Up the inclined road past Glyn Ceiriog and on to a left turn in Tregeiriog. The next one kilometre plus was a 15-20% gradient with a couple of false summits before we all took a rest at 1200 ft. From hereon in it was a swooping ride of hills, vales and ridges through lots of "Llan" prefixed villages. "Llan" means "place of" or "church of" by the way! We arrive at Pen-y-Bont and take the lane to Llansantffraid-ym-Mechain*. Here the Lion pub seems to be assumed to be the lunch stop, but no, we ride on to the Bradford Arms Hotel in Llanymynech**. 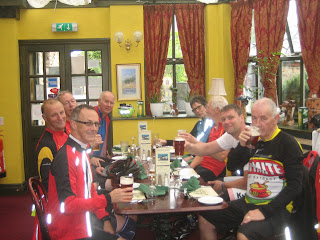 The patron here makes us very welcome even offering his garage as a rain-free bike park. The fare is good as is the beer, and as we hear the rain thundering on the conservatory roof we rue the fact that there is 15 miles back to Chirk. We leave bound for Maesbury and thence through Oswestry. Up and out past the Iron Age hill fort we slosh through the rain bound for Weston Rhyn and the canal aqueduct access to the back of Chirk. As we arrive back in Chirk, Brian Mac heads for the station and I look for Ivan, but by the time I find him, we have missed the train by seconds. Reluctantly, we had to "dry out" in the Hand Hotel bar for an hour. Only 40 miles, but quite a lot of hills and a lot of rain post lunch
The weather forecast was unfortunately spot on today. Light rain started about 12:00 and increased as we traversed the Berwyn foothill south and westwards. It became heavier in the afternoon as promised.
See route map and/or gpx file download.
CA
*Meaning: Llansanffraid means "Church of Saint Bride" in the Welsh language and ym-Mechain refers to its location in the medieval cantref of Mechain.
** Llanymynech: The name is Welsh for "Church of the Monks". The village is on the banks of the river Vyrnwy, and the Montgomery Canal crosses through it.
*** The Battle of Crogen took place in the Ceiriog Valley, Wales in 1165, between the vanguard of the forces of Henry II of England and an alliance of Welsh princes led by Owain Gwynedd. Although outnumbered, the ambush tactics and valour of the Welsh aided them in their defeat of King Henry's army. Some sources report that adverse weather conditions also played a major part in Henry's defeat. Those weather conditions however were endured by both sides