It was promising to be a rare warm day as we rolled up to Manley Mere.  It was great to see Mike Morley who had driven down to meet us (and took our photo).  Mike Gilbert arrived glistening having ridden from Shotton. The riding group consisted of Steve, Paul, Mike G, Trevor, Andy, myself and Ivan ‘Choo Choo’ Davenport. I had a route to Dunham and hot Mike had planned something similar. We settled on The Swan with Two Nicks at Little Bollington for lunch.  I shared Andy’s fondness for the Lavender Barn, but its setting is more attractive than its food and service. Ivan was desperate to go to the pub. 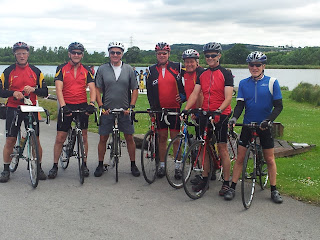 We took the New Pale, Waterloo and Dark Lane route into Kingsley, and Roddy Lane out. We reached Acton Bridge via Actoncliff. The strong wind soon had us bowling along to Great Budworth, the habitual feasting place for our missing tandemists. After passing south of Arley Park we headed north up Cann Lane and over the M6 briefly stopping at Booth Bank under the M56 at the site of a former Wesleyan chapel.  A few minutes on we were sitting outside in the sun, enjoying good food and friendly service, at our chosen lunch venue.
Following lunch we crossed the exceedingly slim bridge over the River Bollin and climbed over the wall into Dunham Park, passing deer by the Hall.  We then headed out of Dunham Town by Back Lane, crossing the Bridgewater Canal and joined the Trans-Pennine Trail. Ivan wanted to know what I was up to, as I headed down a short stretch of overgrown bridlepath toward the centre of Lymm. He seemed to grow a little apoplectic and then fell over!  Fortunately, he hadn’t injured himself, and seemed to think it was a good thing to get used to falling over again as long as ambulances weren’t involved. Strange fellah!  We cycled south out of Lymm and via a myriad of quiet little lanes and the old airfield at Stretton, were soon passing Garland Hall and heading for the duck pond at Higher Whitley.  Mike Gilbert’s map-reading skills and support were much appreciated here. The last stretch took in Aston, and then a designated cycle route to circumnavigate the first hill into Frodsham. Andy and Trevor weren’t too keen on the Frodsham route, because of the busy main road and steep climbs back.  I totally understand this perspective, but it is always hard work from the Weaver back to Manley whichever way you choose, and once up the Ridgeway, the last nearly three miles are 95% downhill. The headwind didn’t turn out to be an issue on the way home, because of the lush summer hedges and sheltered route. Actually, some breeze was welcome on a warm afternoon heralding a fine week ahead. Thanks to Steve for his support work at the back of the peloton, this is always appreciated. 54 miles, Manley to Manley, and considerably more for Mike the Map. We all rubbed along very well, and I thoroughly enjoyed everybody’s company.
DH
Posted by Gudfadirin at 15:30