Seven of us assembled at Hildegard’s with the prospect of indifferent weather ahead. Both Trevor and Brian Mac had only come for the café, leaving Ray, Andy, Petar, Tish and Steve for the day. Tish is new: she joined last Thursday’s group for part of the ride and obviously liked what she found, for today she was back for a full ride.  Andy suggested Ellesmere as our destination, and so everyone else nominated him as our leader for the day.
We had a delightful journey out with reasonable weather and a modest headwind, passing through Shochlach, Worthenbury, Holly Bush and Duddleston, to approach Ellesmere unusually from the NW. This is where things started to go wrong.  First the weather changed, with an initial shower turning to heavy rain, then Petar was nearly wiped out by a lorry, and then Steve got separated from the group by traffic.  Eventually we reassembled in the warming atmosphere of the Red Lion, where sustained by the over-60s menu, we refreshed ourselves and dried off. 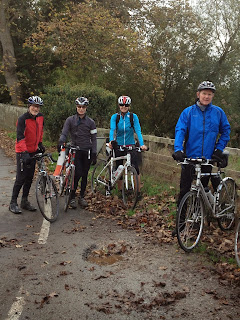 When we emerged from the pub, the rain had stopped and we plotted a return via Penley and Threapwood, before rejoining our outward route for the final few miles. Andy warned us of a few steep hills on the return, but a fine afternoon and an encouraging tailwind helped us on our way.  We paused at Sarn Bridge, near Threapwood, for our photo and noticed the Queen Head Hotel as a possible future pub stop, until we saw it was closed.
A relatively short 35 miles in total brought us back into Holt for a final stop at Hildegard’s by 3pm, in plenty of time before an early dusk following the clocks changing at the weekend. Tish and Petar drove back and the rest of us cycled back towards Chester.
See route map and/or gpx file download.
SH
Posted by Gudfadirin at 13:53