Our last ride of the summer season from Chirk and the forecast was for a warm sunny day. Although not one of our more popular venues, Chirk does give us quite a variety of rides to look forward to. However, I was determined that I was not going up into the Welsh hills again, so scrutinised the map and came up with a relatively low level route around Shropshire. A message from Dave P the night before showed that he had similar thoughts so between us we chose the strangely named Ruyton-XI-Towns as our destination. A group of seven, consisting of Steve H, Steve T, Dave H, Bryan, Dave & Liz P and Jim duly set off from the café at 10:30. Ivan had plans to test his new bike against the hills and set off with Tom for the slopes. 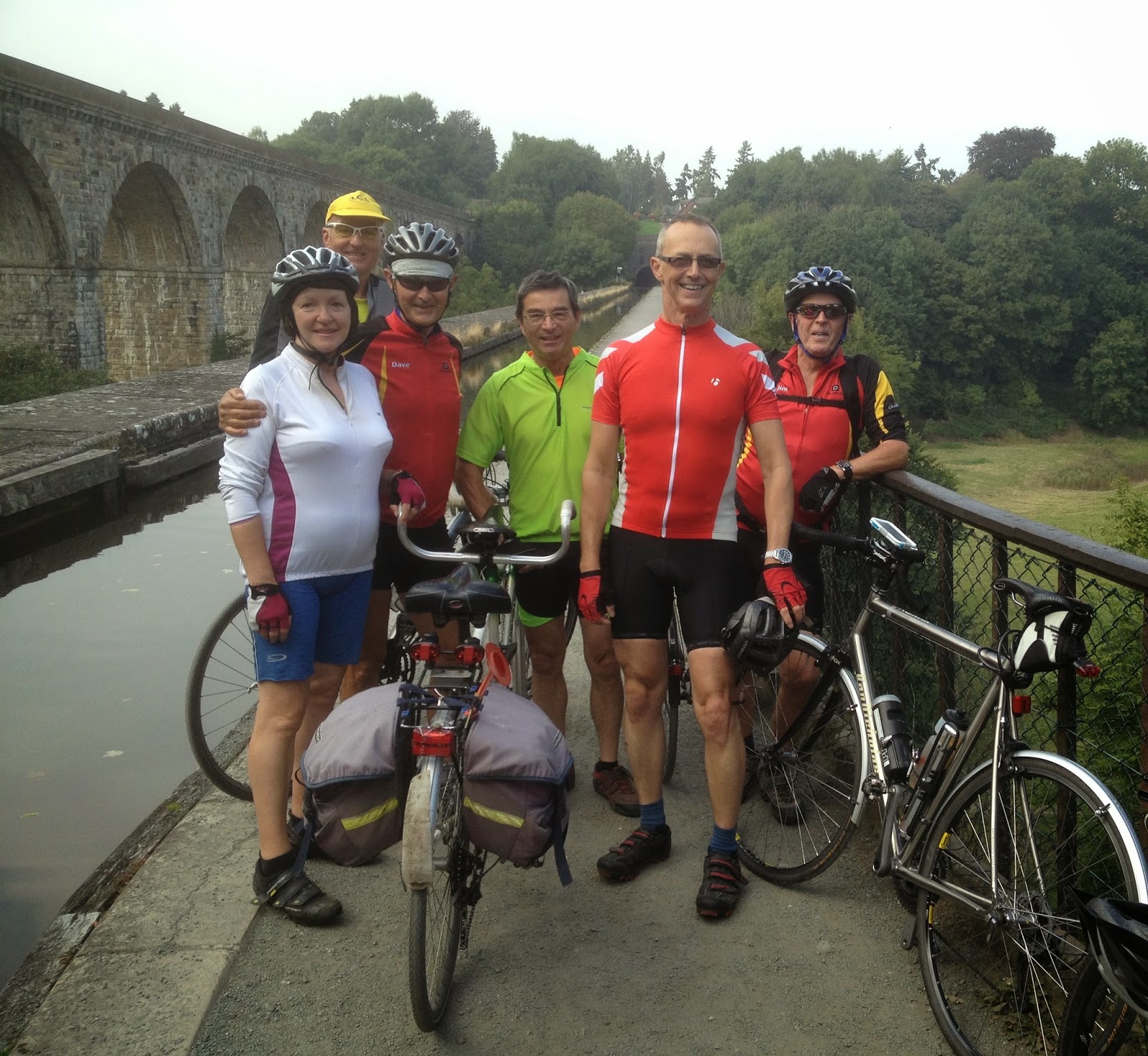 Photograph by Bryan Wade
We crossed the valley on the canal towpath and were treated to magnificent views up the Dee to the Welsh hills. The first real obstacle was crossing the traffic island on the A5 but we were soon safely on the lanes circumventing Gobowen and heading for Whittington. This seemed to have some potential for a more lengthy visit in the future, but for today we took the back lanes towards Maesbury and then east for West Felton. By and large the route was almost traffic free and we bowled along enjoying fine weather and the many unvisited hamlets, such as Eardiston and Wykey. The terrain was generally undulating with enough uphill bits to make us work reasonably hard at times, but soon we started picking up the signs for our destination. A quick check of the history reveals the correct title of the village “Ruyton of the eleven Townships”, referring to a time during the Middle Ages, when there were many small townships in the area, Ruyton being one of them.
The village itself was not particularly scenic, but the pub, The Talbot, was right in the centre, and served a good choice of local brews and a light bite menu. This was fine for us, as it is not easy pedalling for two hours when full of the pensioners three course special!
Special thanks to our friends at Camra and their website ‘whatpub.com.’ where I found the details and phone number of the pub.
After a pleasant break we set off back northwards through Stanwardine in the Fields, Bagley, Lower Hordley, and then the Franktons.  We were soon skirting round the east side of Gobowen and back to the café for coffee and cake. A very pleasant 38 miles in mostly uncharted territory.  A fine day out that will provide us with pleasant memories when we are splashing round the Wrexham Industrial Estate next winter.
See route map and/or gpx file download.
JD
Posted by Gudfadirin at 15:58