Arriving at the Ice Cream Farm with Trevor and Tom I found there was quite a turnout for today’s rides.
I had prepared an outline route to visit the Red Lion in Market Drayton, a first for me. It was a sort of ‘moderates plus’ ride, that could be varied depending on the group, how people felt, time and the weather conditions. I had the flexibility of my manual GPS (printed extracts from OS maps) to make any changes.
Following Dave M’s announcement on John Wilkie’s success in the PBP (see posting below) and excusing himself from the rides as he had to look after the grandchildren, we duly split into two groups, mine containing Ken, Paul (with new bike), Steve T and Tom. The other group contained Liz & Dave P, Andy, Bryan, Steve H and Trevor who were off to Audlem. I had one request from Steve T, could I make our ride at least 60 miles. 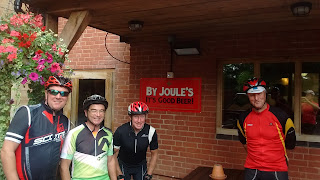 At 10:30 sharp with a slight south-westerly breeze against us we set of in the direction of Malpas. It was a fairly direct route via Bolesworth Castle, Brown Knowl and Ashtons-cross; crossing the A41 at Hampton Heath. Left in Malpas, and followed the B5395 for a short distance then on through Higher Wych, crossing the A525 and taking the A495 as far as Bronnington. A left turn ensued and we were cycling steadily through Whixall, Coton, and onto Prees. After Prees we took in Darliston, Fauls where we observed the local council collecting from the roadside verge a lorry load of dumped tyres. The weather was beginning to threaten and it started to rain as we cycled on the A53 to Market Drayton. They have a wonderful one-way system in the town, and to get to the Red Lion/Joules Brewery we cycled almost all of it. We arrived at about 12:50 having covered just over 32 miles. It was a delight, lovely food and the Joules Pale Ale well; I could have stayed there all afternoon, but I would have had difficulty getting on my bike again. 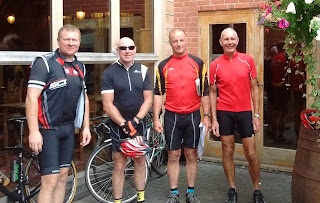 After lunch we headed in a north-easterly direction towards Norton in Hales. We turned left at Betton to Adderley, left again onto the A529, then right to Aston passing Shavington Park on our left. The wind was generally in our favour but distant rain clouds were observed, fortunately we were following so didn’t get wet. At Aston we met the other mods group and cycled with them as far as Wrenbury, where they went on their way whilst I reconfigured my GPS for the final run back. At Chorley Bank we parted with Ken (our expert on telephone exchanges) who was to make his way home to Rossett, whilst the remainder of us turned right passing through Brindley, Bunbury and Beeston returning to the Ice Cream Farm just before 16:00 for afternoon tea. We covered 63 plus miles at a steady average speed of 14.3 mph (according to Steve T). Those who cycled in from beyond Chester will have covered in excess of ninety miles.
Overall, a lovely ride in pleasant company taking in some new lanes.
MG
Posted by Gudfadirin at 20:59