For our final special ride of the year I offered a mostly flat ride from Ainsdale that I had done myself several times. Because of family connections I knew Ainsdale fairly well and finding a café to start from was no problem at all. As a cycling group that always likes to start out from a café the ideal place was Mecycle, a café and bike workshop opposite Ainsdale station. Ten cyclists had signed up but at the last minute two had to pull out. One couldn’t get the time off work. It’s a shame when work interferes with your social life. So with one late addition nine of us turned up on a lovely sunny but windy October morning. These were Dave H & Dave P, Steve H & Steve T, Bryan, Jim, George, Nick & me. We were provided with a warm welcome along with teas, coffees and a variety of pre-cycle snacks to fuel the first half of the day.


Well satisfied with both the service and the refreshments we set off down Shore Road before turning right onto Coastal Road. It soon became clear that we would be safer off the road and so crossed over to the cycle path on the other side which fortunately was relatively free of pedestrians and other cyclists. Coastal Road gave way to Marine Drive and after ducking under the Pier at Southport we were treated to uninterrupted views across the Ribble Estuary to Blackpool with its prominent tower. On a clear day you can see the hills of the Lake District but it was not to be today.

At the end of Marine Drive we turned left and followed Ralph’s Wife’s Lane towards Banks. Some say that Ralph was a fisherman and others that he was a smuggler. Maybe he was both but they all agree that he was lost at sea and that his wife’s ghost still wanders about the area looking for him. Hurrying on in case she made an appearance we passed through Banks, turning right into Hundred End Lane. The wind that had blown us quickly up the coast road was now in our faces as we headed inland. The open farmland that we were now passing through gave us little protection and our pace slowed. Soon we crossed the A565 at Holmes followed shortly afterwards by the A59 at Sollom. The quiet back lanes took us south of Bretherton, meeting only dog-walkers and fellow cyclists along the way. We emerged back onto main roads near Croston where we turned left. A right turn at Ulnes Walton took us towards the village of Eccleston. As we entered the village I checked the time and worked out that we should be at our lunch stop just about 1 o’clock, the appointed time. Too soon! As we turned off the main road at the far end of the village I counted our cyclists coming round the corner but only got up to eight. Jim was missing. There was no sign of him coming up the road and a quick phone call confirmed that he had been stopped by a puncture. Steve H and I went back to help him and we were soon back on our way to a slightly delayed lunch.

Up to now we had done 24 miles with hardly a hill to climb but now we were climbing up to High Moor and our lunch stop at the Rigbye Arms at Wrightington. Our reserved table was waiting for us with an interesting menu with dishes that included Venison, Grouse and other Game as well as the usual pub fare.

After lunch we were faced with our longest and steepest hill so far. Fortunately we were going down it and within a few minutes we had lost all the height we had struggled to gain before lunch. We passed through Bispham Green and Hoscar before ducking under the Leeds-Liverpool canal to arrive at Newburgh. I had promised the others a few ‘undulations’ after lunch and a few we had as we passed to the north of Skelmersdale. Then there were a few cars to dodge as we passed through the southern edge of Ormskirk just as the school run was beginning before crossing back over the A59 at Aughton. 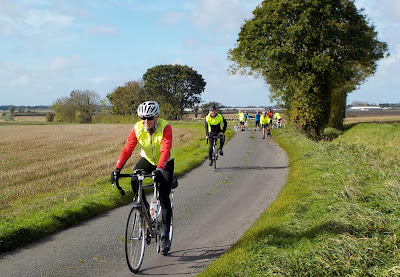 Any hills were well and truly behind us by now and we were now back on the flat for the final part of our cycle, the wind becoming a significant factor once more. We crossed the Leeds-Liverpool canal twice and, eager to get back to the café before it closed, almost missed the turning into Eager Lane. We passed Downholland Cross and crossed the Leeds-Liverpool canal for the fourth and final time to reach Halsall. As we cycled along Plex Moss Lane on the final run into Ainsdale we were treated to a fly-past by hundreds of migrating geese.

At the end of the lane we crossed over into Coastal Road then back up Shore Road to arrive at Mecycle with 54 miles completed. We were now faced with a simple choice. Head home and sit in the traffic trying to cross the Runcorn Bridge or sit in the café and enjoy a coffee and cake. I will leave my readers to guess which option we chose!

Footnote – It was only after returning home that I discovered that Mecycle is actually a charitable concern run by the Autism Initiative and providing work for people with autism as well as raising money. Well worth a visit if you are in the area, whether you have a bike or not.