Seven of us turned up at Delamere: David M, George, Steve T, Steve H, Nick, Mike and myself. Steve was nursing a knee injury, so was unable to ride. Dave was running-in a temporary bottom bracket on his exotic classic, and didn't want to chance it.

So it was, that the Not So Famous Five set out for Acton Bridge via Norley, and the quiet, homely hamlet of Onston. After Comberbach we by-passed Great Budworth passing the attractive Cock at Budworth pub and restaurant. At Bate Heath I considered heading north for High Leigh and Lymm, in order to stay in the “dry corridor” between Manchester and the next wave of wet from the west due at about 5 p.m. However, I decided that the lads may feel short-changed by an abbreviated route, so we pressed on. It was drizzling all the way to Knutsford and through Tatton Park. We had been brisk, so decided to ride for a few more miles by heading for The Swan with Two Nicks rather than eating at the restaurant by the Hall. It was around this time that Mike enthusiastically volunteered to take the photograph of three bubbly young women. He took a long time getting their photos just right, and finding the correct buttons! They kindly reciprocated by taking our picture (below). We headed for pretty Rostherne, and on to Bucklow Hill. We then cycled up the old main road, on a new cycle track, to see if it was now viable to cycle straight past Rostherne Mere to Booth Bank and Little Bollington. It appeared that the new motorway link road had chopped off that possibility. We were getting wetter and a little hungry, so we returned to our normal route via a new bridge to Hulseheath, before heading north for the last couple of miles before lunch. 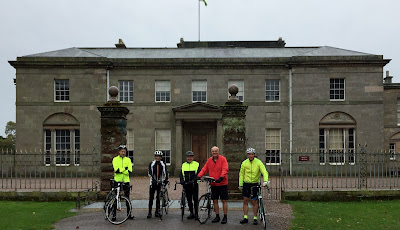 Lunch was really good, and the service was efficient and friendly. Conversation was interesting about careers education, aspiration, and the need to strengthen technical training routes. We sat in front of a wood-burning fire, trying to dry our outer garments. George was so close to the fire that he began to sizzle.

For our return, I promised the lads that we would be in the dry corridor, promised by Diane and Carol, within five miles of heading west. We rode to Lymm by largely following the Bridgewater Canal, and left Lymm by the little lanes to Sworton Heath. After Swineyard Lane we negotiated a maze of muddy little lanes to Frandley, and on to Little Leigh. Mike thought I had caught the Clive virus, which leads to meandering endlessly in the muck until the wet, shivering weaklings in the group start hallucinating about a warm black taxi suddenly appearing from a wet-leaved, sodden side lane. Tanny and I had not come with mudguards, and were paying for our stupid optimism. Needless to say, the rain got heavier and heavier, and our last miles were direct via Crowton and Norley. The roads were flooding in places, and going through the forest an oncoming car submerged me totally in a wall of water. Nobody stayed for a cuppa at Delamere, as hot showers and dry clothing a.s.a.p. was top of the agenda. When we got to Steve's house I showed him the state of my front car seats: very muddy and very wet. Despite sponging and the use of a hairdryer, the car still smells like an old wet dog, days later. To top it all I fell over my bike and into Lynne's car when I got home, and gave my knees a good mashing. Still, I so need the exercise and enjoy the company, that I am glad I turned up to ride. My trust in Carol is no longer so unquestioning however! We managed 51miles.