Today’s meet was the ICF and on the first of this year’s sunny day’s I rode out with Clive from Chester. Great to be out with him again and see he is enjoying being back on the bike. There were plenty of Mod riders at the ICF but only Nick and I were out as the Brisk group.I had a route to the White Lion at Barthomley and an 83-mile round trip to and from Chester. Nick and I set off and encountered the first of many road works at the end of Newton Lane just one of many road’s blocked during today’s ride. Road pot hole filling was the jinx of the day rather than flooded roads of last week’s ride.

We rounded Beeston and on through Bunbury. Tilly’s café was packed with morning strollers but the front car park was filled with cars rather than bikes. We take the lanes leading to Ravensmoor and encounter the only muddy patch of the whole day. On arriving at the cross roads at Ravensmoor, I stop and find Nick is not behind me. A couple of minutes later he rounds the bend. So as not to muddy his pristine cycle which has seen a lot of devoted cleaning recently, he went at crawling pace so as to reduce the slurry marking his new carbon wheels and frame.

It is a lovely experience cycling in shorts and shirt only after what seems like a long winter period. From Sound, we head on to Audlem and pass through the town on the A529 then out to Hankelow. After about 1.5 miles we turn left onto Bridgemere Lane. I have ridden this before and it is a good lane passing over the A51 at Bridgemere. Following this route, we pass Checkley and into the pretty village of Betley. Taking a right turn we go along Knowlbank Road with the intention of continuing along the B5500 but a big fence tells us the road is blocked. They are doing bridge work over the M6 so if passing on the M6 after junction 16 if the look for the trio of bridge works we were intending to cross the middle bridge. After consultation with the Garmin, we retrace our route back to the previous road works and have to detour taking a right, right and right turn which brought us back on route to take us to the White Lion at Barthomley.

We were not the only cyclists using this hostelry today but fortunately they were enjoying the sunshine outside. We ordered our lunch, Steak and Guinness ale pie and mash with veg: fantastic lunch with lashings of gravy was just what was needed for the remainder 40 miles back home!!! Our return journey took us south of Crewe passing the largest rail yard on the West Coast, Basford Hall Junction thence passing through Shavington, Blakelow and into Nantwich.

Nick and I had already decided where the afternoon stop would be and we were stopping at the Cotton Arms at Wrenbury. I have used this before with Clive and Dave Heath as they offer ice cream but when we arrive I couldn’t resist a cool pint of golden ale. 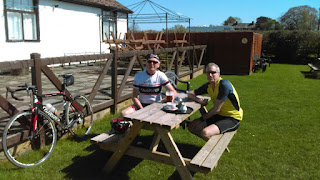 Too soon we were back in the saddle bound for Cholmondeley but half way along the estate road we turn left towards Larkton to ride via Tilston (Nicks abode). I leave Nick at the Carden Arms crossroads and continue lonesome back to Chester via Barton, Coddington and Alford. Exiting at Churton it is the B5130 I ride to Huntington and home. I’ll leave cleaning the bike for today as the slurry has already dried hard as XXXX so nothing spoiling.

As booked, both Nick and I have enjoyed 84 miles of lovely riding on very pleasant lanes now they’ve dried out and the flowers and fields are in bloom with plenty of chorus from birds happy to sing in the bushes and trees as the sun shines; it was a pleasure today. The circular route to ICF would have been 67 miles.