We all gathered and rode out together at the Roodee café Chester for today's top billing of the year as Bryan led the 10-year anniversary ride to Ness Gardens.

After coffee and speeches, the Brisk group consisting of John M, Nick and myself rode on to Frankby and thence meeting up with the Mods at the “Old Rathbone” (formerly the “Farmers Arms”) who were keeping to the original route of ten years ago.

Our route out, via Parkgate and with clear blue skies the view across the water to Wales, was very spectacular. We kept left of the A540 skirting the mega houses on this peninsular side and negotiating Oldfield Drive which must be the only unadopted steep path/road on the Wirral. We stopped for a photo shoot at the top, one to get our breath back and also to take in the view on offer. 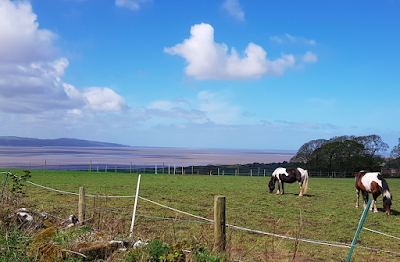 It was then on to Irby before dropping into Frankby and the 'Old Rathbone”. It was surprising that we were there first, but the remaining group arrived 10/15 minutes later minus 3 riders. Have to read their blog for further info!

After a good lunch and speeches by Bryan and Dave H, we set off on a different course home again from the main group and did a loop around Frankby up to Greasby and Woodchurch. I had a cycle route through this area but was unable to locate the route; too many houses new and old.

We crossed the busy A552 and headed up Landican Rd. The mods were also heading out this way but they were either too fast or to slow as we didn’t meet or catch sight of them. Carrying on through Pensby and Hesswell to Brimstage and then turning for Thornton Hough.It doesn’t seem to take long to get out of the one half of the built-up Wirral before entering the opposite half which becomes mainly fields thankfully. Raby Mere was next before heading down Rivacre Valley.

We had the wind behind us most of the return ride and were enjoying this particular stretch of road. We are overtaken by a car who slows to a stop on passing us before starting the climb out of the valley. As we get up to the car it set off at full gas !!!! We now have the ride through the port and this town will never win architectural awards either. Crossing over the main street we head down Cromwell Rd which is now a massive new housing estate.

We take a “Clive short cut” at the end of Thornton Rd and pass under the M53 and up to the main roundabout for Cheshire Oaks. As soon as we arrive at Stanney Mill Road the traffic is very noticeable with queuing traffic either direction. Pavement riding up to the old Cheshire Oaks Cycle shop (now closed) we circle anti-clockwise round the roundabout via the cycle way and crossing lights.

After negotiating the standing traffic, we are on Little Stanney lane heading home. Through Stoak and Wervin and into Upton where we say farewell to John. Nick and myself ride on to Brook lane where we join the greenway and branch off along the canal to Telford's Warehouse and the Roodee café.

Today’s Wirral ride was a 60-mile ride out and back which was a little further than the inaugural ride of 45 miles. With 18+ riders taking part today with two groups of riders to mark the event, it was every bit as special as that first ride 10 years ago.