Another good turnout for our second official meet since lockdown, this time at Alison’s Country Kitchen in Tattenhall. We all sat outside in the sun and contemplated various possible routes. Among the mods at one point it looked as though there might be as many routes as riders, until Steve T organised us. I had prepared a ride to The Swan at Marbury and Steve T and David M came with me.

The previous night had seen an epic thunder storm with several hours of torrential rain in the Tarporley area, so I was expecting some flooding, gravel and sand debris on the roads. This caused us some minor challenges as we made our way through Tilston and Threapwood, before heading SE across the two A-roads to Fenn’s Bank.  In answer to David’s on route query, the large industrial plant here is BEFESA Salt Slags, a company engaged in recycling of steel dust, salt slags and aluminium residues! We rode onward to meet the Alkington Road into Whitchurch. We passed through the town centre and began to turn northwards using the Mercian Way cycle route. Here Steve T noticed the milepost, an unmissable photo op for these times. 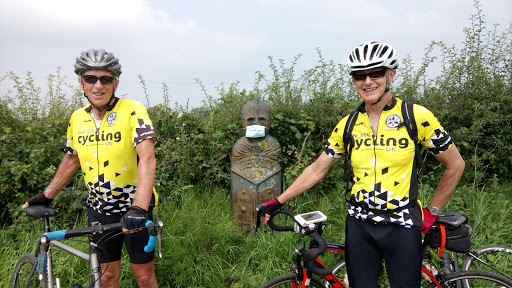 We arrived at The Swan with about 26 miles covered. The pub offered a number of well-spaced outside tables and we chose one of them with a sun shading umbrella. Service was quick and friendly. Steve and I enjoyed the fish finger sandwich, the first time I’ve sampled this delicacy, while David had a prawn sandwich and a pint of shandy which was very heavy on the beer.  The combined bill arrived and we tested our rusty mental arithmetic working out what we each owed.

Payment made, our route back took us through Bickley and Bickerton. Here David left to make his own way home, and Steve and I continued by Bolesworth Castle into Tattenhall and back to Alison’s.  We chatted about the ride while I fought off several wasps to eat my slice of cake.  Another good ride with 39 miles covered.