Steve Tan and I shared the Berlingo to Tattenhall, and Steve had to point out that I had missed the A41 turnoff and we were heading for Rhyl! I had hoped to lead a ride this week, but I couldn't even navigate my way to the start! The sun was shining at Alison's, and we were able to have a sociable twenty minutes before deciding who was riding where. Trevor had ridden out for coffee, but was not riding with us. Neil, and Dave “I don't need maps” Matthews had two tempting offers to Meadow Farm and Ellesmere respectively. We rather arbitrarily rationalized as we had more ride offers than required. In the end Neil went with the fast lads John Wilkie and Nick, and Dave joined Steve Tan on Steve Haywood's ride to Marbury. Only the most recent club recruits were naive enough to choose to follow me to Aston: Steve Hughes and Erik. Steve Hughes must have been very forgiving, as I had inexcusably failed to recognise him initially at Alison's behind his Wilko's GT dark sunglasses. It was also good to have Erik on board again.

We headed out uphill past Bolesworth Castle and on to Brown Knoll. Shortly after turning left at Broxton Old Hall we ran into an impassable flood with an abandoned car in the middle. A 4x4 coming the other way took a chance, and nearly swamped us with its bow wave. I wryly recalled Dave Matthew's reassurance at coffee that we were very unlikely to have problems as everything was drying up nicely after a wet and stormy evening the night before! Never mind Dave, even Pep Guardiola gets it wrong sometimes. 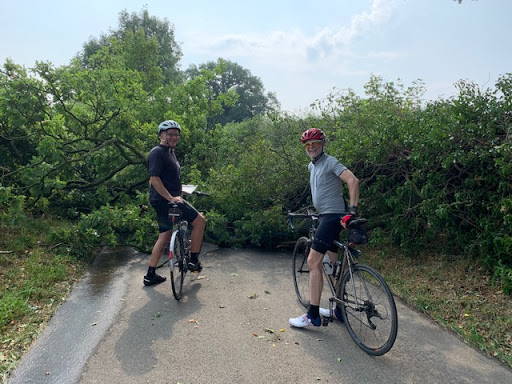 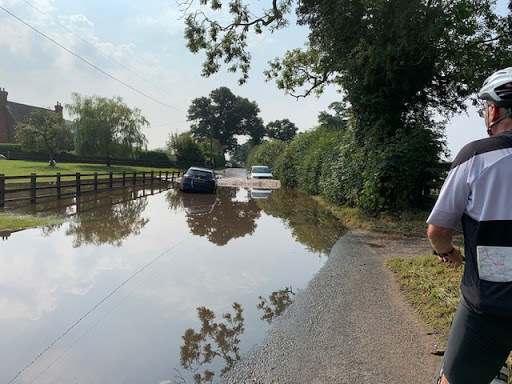 We turned around and worked our way around Bickerton Hill to join my original route at Ashton Cross. We turned left here and found the road blocked by a fallen tree. We looked in vain for a way around in an adjacent field, but we had to divert again in order to come out at Hampton Post on the other side of the tree. Steve's navigational advice was very helpful during these diversions. No Mans Heath and Bickley were next in our sights, but Erik picked up a puncture before we reached Swanwick Green. The tube replacement was not straightforward, but we sorted it between us. Perhaps we shouldn't have! These are the times when the precaution of distancing can easily be forgotten. We headed on to Gaunton's Bank, and stopped just short of Wrenbury, as the bridge over the Llangollen Canal was lifted, in order for narrow boats to pass through. Steve phoned the Bhurtpore to let them know that we were running late.

It had been an eventful morning, but we had plenty of space and fresh air under the gazebo in the back garden. I had booked for a nominal six riders and they had two reserved tables for us (which we didn't need). I had forgotten how good the selection of different brews is here. I had a Timmermans Belgian strawberry beer in a proper Timmermans glass, and Erik was offered a large selection of non-alcoholic drinks. It was a hot day, and I could have happily downed another pint to help swill down my goat curry. The Bhurtpore has always been a favourite for Chester Easy Riders, and the selection of fine ales have always been appreciated by Bryan Wade. It also reminds me of summer afternoons past with Dave and Liz, and Jim. These may be uncertain times, but sitting in the shade outside the Bhurtpore on a warm August day in good company, with a refreshing drink in my hand, all was well again.  This was normal at its best.

Our return was via Ravensmoor, Bunbury and Beeston, and we turned up the wick a bit. It was good to see Tilly's still in business, but it was too soon after lunch for a break. Also, because of our morning diversions and puncture, I expected Steve Tan would be back at Alison's, sitting on a wall twiddling his thumbs (and he was).  Unfortunately, Alison's closes early, so we all headed for home. Steve and Erik still had some cycling to do, and I arrived back in time to get my wife's car out of a Widnes tuning shop with its emissions sorted. We covered a modest thirty-eight enjoyable miles, and it was good to get to know Erik better. I also know more about Steve, and should be able to recognise him if he turns up next week!