I hadn’t seen so many riders at a previous CER meet, especially one from Chirk, which is always more of an effort to start from.  Clive volunteered to lead a brisk ride into Shropshire again on what was his 6th Anniversary as a member of CER.  On the promise of small hills, I joined him along with Darren, Ivan, Steve T and Tom and agreed to write the ride up. 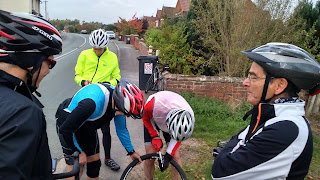 As we rode in a giant figure of eight, it was not long before Clive suffered a p@@@@@@@ due to the seasonal hedge trimming.  He was then supervised by the others while changing his tube.  (See photo)

Passing the Queens Head PH, we continued south, skirting the shop at Knockin and headed along unfamiliar lanes around the north side of The Wrekin escarpment.  Turning back north, we completed about 60% of the ride before searching for the only pub in Ruyton-XI-Towns to have lunch but found it was closed for renovation.  We then stopped at a lovely place on the old A5 at Cafe Eleven, Ruyton-Xl-Towns, SY4 1LA, tel: 07976 024 654.
The day, as promised, stayed dry; always a blessing at this time of year.  As the brisk pace continued after lunch, after skirting Ellesmere, I decided to veer off at a more sedate pace & arrived back at the Chirk cafe with 56 miles at 15 mph on the clock.  A pleasant final ride from Chirk till next year.
See route map and/or gpx file download. 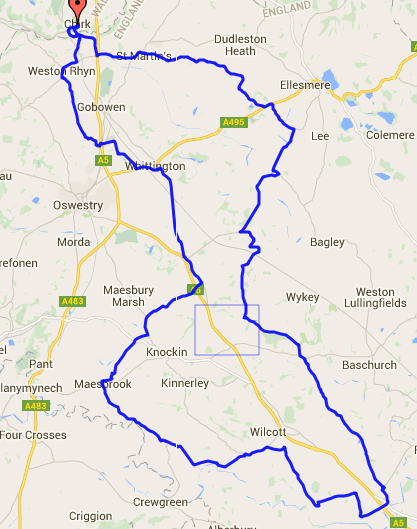 Brian Mac, now known as Macca, so as not to be confused with the new member Brian M
BMac