I hadn’t quite expected 21 riders out for the last Special Ride of the year, but the numbers kept rising in the last few days; some I knew were coming, and some I didn’t! - but all were well rewarded by quite the best ride of the year - but then I’m biased! Firstly, my thanks to Jim who kindly agreed to lead the Moderate group out. No doubt a mammoth job with 12 bikes and just an unfamiliar squiggly line on his bikenav. 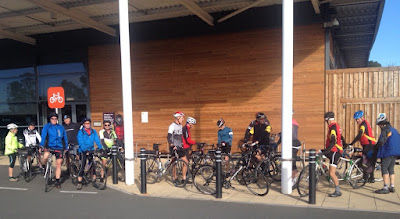 The Brisk group, consisting of Ivan, Ray, Paul, Steve T, Ken, John, Tom and myself, set off around Whitchurch and out bound for Alkington. There is a steady climb out of Whitchurch over 3 miles before we dropped down through familiar villages before skirting Loppington and arriving at Waterloo. Then there is 7 miles of quiet tiny lanes before Myddle. Here as the Moderate group would go eastwards, we were turning south through the middle of Myddle just passing the middle of our outward ride. From thence onward it was all new lanes to all of us, and what lanes they were. Fourteen miles of tiny yet fast lanes with fabulous Salopian countryside to enjoy in the sunshine. The Garmin riders lead the ride for me here, eager to get to the pub. 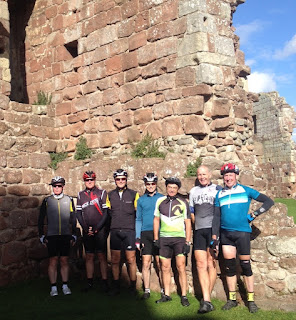 We arrive in under two hours with 30 miles up. The “Elephant and Castle” were ready for us with tables set and stoves ready. Given eight orders went in, they came out quite promptly and were appreciated by all (I think?). A useful venue for future rides perhaps. Leaving at 13:30, we set off north and briefly stopped at Moreton Corbet castle ruins. What a site it must have been in February 1216 when William Marshal, Earl of Pembroke, besieged it on the orders of King John. The Elizabethan additions were also magnificent in the sunshine. So we now head inexorably for Marchamley Hill, the only obstacle on the way back. Although most of the route back was familiar to me, the sunny countryside was magnificent in its autumn colouration. At Prees Higher Heath, a nip across the A41, sends on our way via Ightfield, back to Sainsbury’s for a drink and cakes by 15:00. For me Shropshire seems to be a cyclist paradise of quiet lanes and big views without too many big hills, so maybe more away rides will be planned there in the future. As we got into our cars, Paul was joined by John on his ride back home to Chester - a 100 up today for Paul. Hopefully Keith M and Jane maybe tempted out again with us in the future.
See route map and/or gpx file download.
CA

PS: Thanks to Sainsbury’s Whitchurch store for allowing us to park at the store.