With the promise of another dry day our biggest group yet met at Sainsbury’s café in Whitchurch for a day out in Shropshire. The CER members of Dave H, Dave M, Keith, Bryan, George, Trevor, Andy, Dave & Liz P, Petar and Jim were joined by two guest riders, Jane and Keith M.
The most difficult part was finding Alkington Road out of town, but Andy and Dave M skilfully led us in the right direction (by following the signs!) and we were soon heading south towards Whixall. 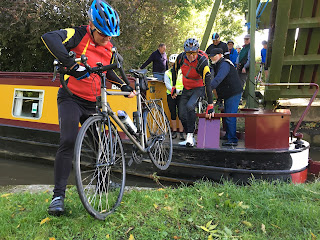 However, hardly had we exited Alkington before we came across a ‘Road Closed’ sign. Mindful of our experience the previous week, we ignored it again and found ourselves faced by a raised canal bridge. AND, a canal bridge that looked like it was not going to be lowered for some considerable time. Fortunately, the canal narrowed substantially at this point, presumably to reduce bridge building costs, and a narrow boat, the Ottar, was slowly moving through the pinch point. Much to our delight, the ‘bargees’ Jeff, Jim and Peter suggested that we simply cross onto the barge and onto the bank opposite. Without further delay, we passed our bikes and bodies over the cut and in no time at all had defeated the road closure. Southwards we went, into Whixall Fen, an area with a very interesting WW2 history. The lanes were well-surfaced and coupled with the lack of traffic, the ride through Waterloo, Horton and Loppington was a delight. We soon arrived at Burlton, where the brisk group had gone south but we were heading east. A short stretch of main road led to us to Myddle where we got into a bit of a muddle on a hill and found ourselves ‘tandemless’. Keith retraced our route, and using the modern miracle of the wireless telephone we agreed to meet up further along the road. Passing through Harmer Hill and Yorton, we were soon all back together again, and continued eastwards through Grinshill and Acton Reynald. 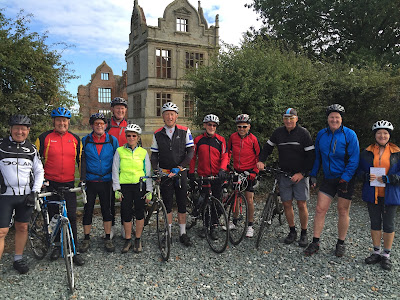 A short diversion found us posing for photos outside the sadly ruined Moreton Corbet Castle, and then skirting the boundaries of RAF Shawbury, we arrived at the ‘Elephant and Castle’ as the brisk group were finishing their meal. We were given a very pleasant reception by the hotel staff, who had even organised a ‘cyclists special’ menu for us, and were not at all put out by having a group of 13 appear for lunch mid-week. Service was good, and we were soon ready for the return. Dave M had set off in advance as he had matters of state to attend to, leaving the remaining 12 to the climb up Marchamley Hill. To their credit, most of the group rode to the top, though some of us took the opportunity to have a gentle stroll. From then on it was mostly downhill north to Prees Heath where we crossed the A41 and up to Ightfield, then Ash Parva and Ash Magna to the Whitchurch ring road.
45 miles on some of the best lanes we have ridden on for some time. An excellent route and great autumn weather: a day to remember.
See route map and/or gpx file download.
JD