Arriving at Manley Mere café there was a good turnout of riders enjoying the spring weather and prospects of a dry day for cycling.
The brisk group today were joined by John Mills so Tom, John M, John W, Ray and Ivan set off and at the end of the drive turned right then first left onto Nortons Lane. This avoids either short climb while getting legs moving!! to Mouldsworth.
We were heading for Partington and we went via Kingsley Crowton to Acton Bridge. We crossed over the Weaver and along the lanes to Littleleigh and Comberbach. The pace was reasonable and John M had no problems and was enjoying the continuous cycling. Through Great Budworth to Bateheath we turned onto Cann Lane to High Leigh. We were riding on the B5159 that had recently been re-surfaced and it was an excellent road surface.  There is a bridge under the Bridgewater Canal controlled by lights on this road. It goes into a single carriageway and blind to oncoming traffic - you would be foolish to disregard these lights. There was also a nice looking inn here but we continue on to our booked inn. 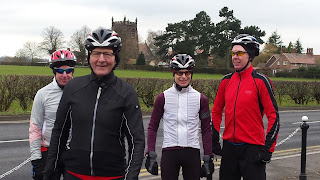 We arrived at the Saracens Head pub and enjoyed our lunch. Back outside we decide on a photo call and it is suggested to focus on the local church instead of the pub!
Continuing the ride we pass through Dunham Massey and along the cycle way to the Swan with 2 Nicks where it is thought the mods were lunching, no bikes visible though so onwards we cycle. 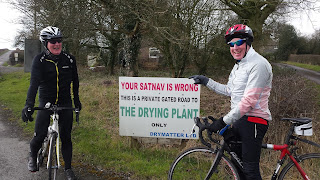 My route had us on Hulsehath lane, which showed as a through route but as the second photo shows it is a dead end!! Turning round and taking several left turns we arrive at the opposite end of the lane showing the national road sign of a dead end lane!! Farmers’ deal we think. We skirt Great Budworth and at Comberbach head west to Higher Whitley and Frodsham.
Stopping at Costa Coffee John W and Tom decide to continue on to Chester so Ray, John M and I have a coffee (cheaper than MM). We also decide that a ride along the A56 rather than the uphill slog back to Manley is favourite and the three of us part our ways back at Mickle Trafford Greenway with a minimum distance of 69 miles for me.
See route map and/or gpx file download.
ID
Posted by Gudfadirin at 15:13