A total of nine CER members assembled at Rose Farm under a grey sky and light rain. Dave M had cycled out for coffee and Bryan W was going to do his own ride.  That left Clive, Paul, Mike McC, Steve T, George, Ray and myself. No one had planned a route so with Clive, I worked out a ride to the Red Lion at Goostrey.
Leaving under light rain we turned left out of Rose Farm and made for Cotebrook. We’d only made it as far as the church, when we heard that Ray had a puncture. The advance party waited and heard the church bell striking the hour – eleven rather muffled chimes…followed by eleven somewhat louder chimes, discussion of which passed the time.  We waited some more and Bryan overtook us on his own ride. Ray was having difficulties - he was suffering from using a Conti tube for the repair: because the valve screws in, when he unscrewed his pump, the valve also unscrewed and the tyre deflated – a warning here to users of Conti tubes. Finally, inventively fixed with improvised pliers, Ray joined us and we continued.
The route led into Winsford from the south and then through the centre of Middlewich. Next we struck out northeast, glad to be back on the lanes. In Goostrey we paused outside the Crown but continued to the Red Lion. We were the only customers and it looked as though we would have to search for the staff. However, food arrived and at £4 for pie and chips it was cheap. On reflection though we wished we’d gone to the Crown. A few of us had been to the Red Lion before but couldn’t remember it until we’d established ourselves there.  This led to a discussion about the benefits of having a list of our favoured lunchtime stops to help in planning future rides. 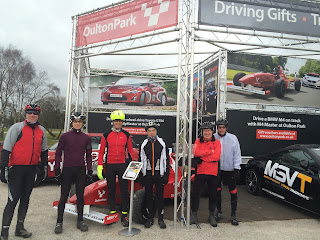 Heading off after lunch we were grateful that the morning’s rain had been light and that it had now stopped. The route took us through Lach Dennis and Davenham, and down the rough track under the railway and over the Vale Royal Cut, the surface of which had been upgraded. Heading back through Little Budworth, we decided to call in to the café at Oulton Park circuit, which we thought was a first visit for CER. It was a novelty and of interest, though I wouldn’t rate the cake as high as our usual standards.
A short ride through Cotebrook, brought us back into Utkinton with a little over 40 miles on the clock, and a much better ride than the weather forecasters had predicted.
See route map and/or gpx file download.
SH