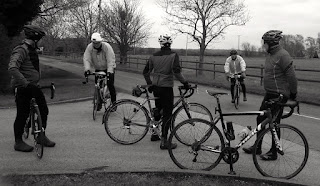 Some of the moderates were elsewhere, caravanning and skiing, for instance.  Steve Tan and Dave Matthews had ridden out, but couldn't take part. Sue Hubbard had also joined us for a coffee. There were seven moderates up for my proposed ride to Tatton Park: Brian Macca, Trevor, George, Mike McC, Andy, Paul and myself. We headed for Dutton Locks via New Pale. Trevor broke a spoke with his uphill efforts, and decided the sensible decision was to return home. Dark Lane, with its pretty cottages, plunged us down into Kingsley, and we exited along Roddy Lane.
It was very pleasant cycling alongside the twinkling Weaver.  We ground up the bank to Willow Green, over the Trent and Mersey canal, and having crossed the A533 reached Frandley by the quiet Hall Lane. The little lanes west of Arley Hall are picturesque and peaceful, and amongst my favourites. Past Pennypleck House we crossed the runway of the old Royal Navy airfield. High Leigh was passed, and the two most vocal of the troops, i.e. Macca and Andy were becoming a little restless. " Dad, when are we stopping?" "Dad I'm hungry, when are we going to eat?" " Ten past one? Your kiddin' aren't you?!" So, we put the pedal to the metal a little, registering 18m.p.h. on the electronic board as we passed the new motorway link road site before Bucklow Hill. Soon we were winding into Rostherne with its lovely mere and old church, and then on to the Tatton Park entrance. 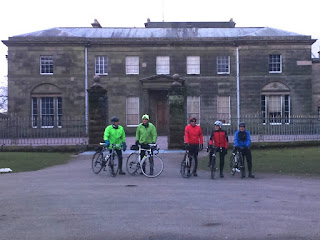 Brian kindly took a picture of us outside The Hall, and then we headed to the Stables for lunch. Bang on time. Most of us were happy with our food, but Brian was understandably underwhelmed by his costly tart. Not for the first time in his life, I bet! We left at 14:07. My aim was to be back before 16:20. The route back was two miles or so shorter, and deliberately intended to be on quicker roads. We rode south past Tatton Mere, and touched Knutsford before heading west to Tabley Hill, Great Budworth, Comberbach and Little Leigh.
I was tired when I started this ride, and the terrain ahead was likely to be quite demanding. Hard work up to Acton Bridge, a pleasant little lane through the hamlet of Onston, and then another hard grind up Norley Bank. George and I had both suffered with mud in our mudguards, and this seemed to be slowing me on the little uphill lane by the Tiger's Head. Although too many cakes and too many years may have had something to do with my Manchester United like energy levels. More up and down on the Delamere Big Dipper. Then one last climb past The Goshawk. Mike considerately accompanied me back. Paul and Macca had been off their bikes for a while recently, but you wouldn't have known it. 52 miles at a nice pace, a good workout and very agreeable company.
DH