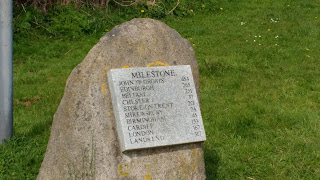 The weather was pleasantly spring-like as a dozen of us met at the Waitrose Cafe in Newport - and what a pleasant market town it is. Jim had organised a shortened version of my 52 miler, so I gathered up Steve H, Chris, Paul and John M for the brisk route out to Yarnfield and the “Labour in Vain” pub. The route out was NCN552 NE towards Cheswardine. Crossing the line of the Roman road at Camp Farm, we arrive at the mile marker plaque in Cheswardine installed for the Queen’s Jubilee, and not as I previously thought in the June 2014 blog entry, the distances on the E2E route. Onwards via Chipnall and Hales, we arrive at 700ft at the A53. Here at Blore Heath, in 1459, was the second battle in the Wars of the Roses, but I couldn’t find the commemorative plaque, so here is the photo ex Wiki. The Yorkists won apparently. 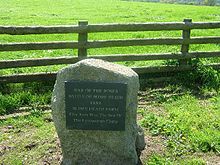 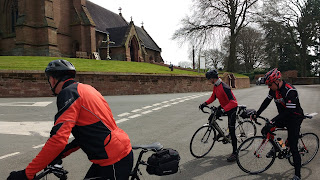 We now plod into the wind and uphill to the “foolish” town of Loggerheads. Apparently Loggerhead meant “a fool”. There was a large TB sanatorium here from1920 to 1969. Up and over the hill, we turn off right to dive through Ashley running parallel to the A53. We soon back on it for a mile before turning right into the delightful village of Maer. We are running well now through the gentle hills of Staffordshire before heading briefly for Swynnerton, which was granted a charter by Edward I in 1309! We now have to circle the former Royal Ordnance factory site near Cold Meece, which employed 18,500 staff to fill shells with explosive in the early 1940’s. We arrive at the pub almost simultaneously with the Moderates. The ale choice is good, as is the menu, but my omelette could have been better cooked.

Suitably refreshed and energy levels refilled, we set off (minus Steve H) bound for Stone and “enjoy” its bypass before picking up the NCN5 rolling around Stafford. We exit the town passing by the 11C castle (the one you can see from the M6) and now we have 15 miles or so of tiny lanes ducking and diving around various hamlets before crossing the A41 just south of Newport. Close to the town centre we are buzzed by two large helicopters that came out of nowhere sounding like machine guns.
We find the Moderates are at the tea and cakes in the Waitrose cafe and we reluctantly joint them, with 52 miles completed and a surprising 2,900ft of climbs. Lots of new lanes today, through the very pleasant Staffordshire and Shropshire countryside.
See route map and/or gpx file download.
CA
Posted by Gudfadirin at 15:50