A good turnout of a dozen riders met at Waitrose Café for a run out in pastures new, thanks to Clive’s initiative. 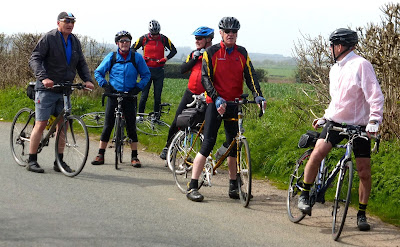 The moderate group, consisting of Bryan W, Brian Macca, Dave H, Mike McC, Trevor, Petar and Jim set off on a slightly shorter route than the brisk group in good sunshine and clear skies, though with a fairly chilly breeze. Heading north through the town centre we skirted Chetwynd Park, crossed the A41, and continued northwards on well-maintained, quiet lanes, through Knighton, Adbaston, Fairoak and Charnes before turning into the wind for a few miles eastwards. The landscape was undulating but not unduly so, though a couple of disrobing stops were deemed necessary as we began to warm up. The villages were typically representative of the Shropshire rural countryside, and we were regarded with occasional bemusement by heifers and several horses as we breezed by. The pace was steady, enabling us to maintain a reasonable level of conversation, one of the pleasures of ‘Easy Riding’. 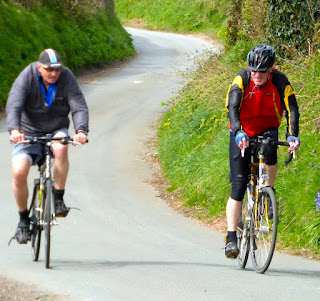 Just to the west of Stone we passed by what looked to be some sort of MOD facility on the map, but the lichen-encrusted sign suggested that either very little training had taken place here for a considerable time, or that it was very well camouflaged.  Shortly after passing the camp we arrived at our lunch stop, the ‘Labour in Vain’ in Yarnfield, a distance of 21 miles, and met up with the brisk group who had travelled a little further. The food was good, and reasonably priced, and the beer drinkers more than happy with the choice of refreshment. 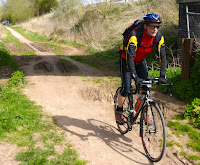 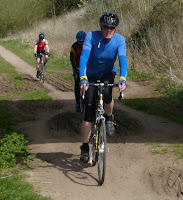 After lunch we parted company once again, though Steve H also joined us for the run back to base. We meandered southwards through Great Bridgeford, and Seighford until we met the Shropshire Greenway just west of Stafford. We were a bit unsure about the quality of the surface for our road bikes, but our concerns were unfounded, and we were able to get into the big ring and maintain a steady pace, helped by the wind, now on our backs. The downside of finishing the day on a cycleway is the lack of visual interest as most of the route seemed to be in a cutting, but at least we had no traffic to contend with. Arriving back at the A41, we quickly crossed and took one of the local roads back to the car park. Apart from weaving between the departing schoolchildren, the route back to the café was uneventful.

A total of just about 40 miles in really pleasant countryside. Thanks Clive.
See route map and/or gpx file download.
JD