When I threw back the curtains I was greeted by rain battering the window. At this point I would have decided that it wasn't a good day for cycling. However since it had been my suggestion to meet at Meadow Lea instead of the Little Roodee Café (currently closed) I felt obliged to turn up. Besides the weather forecast said the rain would clear around 10.00 leaving just the wind. So I got myself ready and I got my bike ready and I waited for the rain to stop. Sure enough, just before ten it did, and off I went for the short cycle to Meadow Lea.
It was obvious from the number of bikes outside the cafe that other cyclists had also had their eyes on the forecast and the place was already buzzing. Because I was local I had a number of circular rides in mind but one in particular seemed suitable, as we would be cycling into the wind on the way out and have it behind us in the afternoon. I didn't know a suitable place for lunch though so Brian suggested The Wheatsheaf at Neston that he had heard served a reasonably priced 2-course lunch. 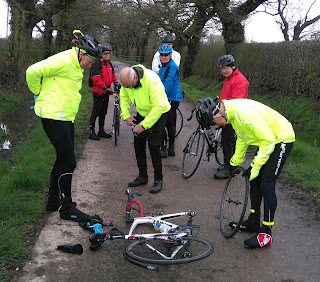 Eight of us set out on the moderate ride, these being Steve H, Dave H, Keith, George, Chris, Jim, and Brian Macca with me leading. We turned north out of Meadow Lea and into the wind. Our route took us out through Mickle Trafford and Picton, round the back of the zoo and over the canal to Chorlton where we turned left to cross the A41. At Mollington we joined Sustrans route 56. We followed it alongside the railway and up through Capenhurst & Ledsham before crossing the Welsh Road.
Shortly after this route 56 turns down a farm track and through a farmyard and it was just after this that Keith's front tyre punctured. As is often the case with slim line bike tyres it was a struggle to get off and a struggle to get back on again. Nothing could be found inside the tyre so it was with fingers crossed that we continued on our way. Route 56 turned off along the Wirral Way as we carried on up Heath Lane and in to Willaston. From here it was up to Raby then left towards Neston, crossing the A540. 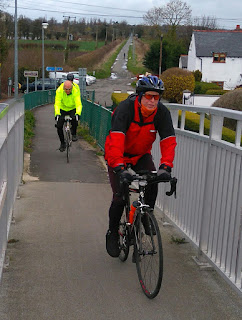 As we approached Neston I let Brian use his local knowledge to guide us to the Wheatsheaf.  After 50p for a pint of lime & soda last week this week's asking price of £1.95 came as a bit of a shock. Brian had been right about the cost of the food though. £5.65 for 2 courses seemed like a good offer. Service was a bit slow, though, partly because they didn't seem able to overlap the courses. Consequently six of us had to sit and watch Keith & Jim eat their starters before any of us got a main course. Some found the food a bit disappointing too. I guess you get what you pay for sometimes.

After lunch we crossed Burton Marshes, played dodgems with the lorries on Deeside Industrial Estate and headed over to the River Dee where we followed the path towards Chester. We were making good progress now with the wind behind us and could have been back by 15:00 but our ride wasn't over yet. At the Ferry Lane bridge we crossed the river and headed out towards Bretton and Kinnerton. Jim left us here to take the short cut home while the rest of us continued on a loop around Lavister, Pulford & Eccleston. We were now heading in the direction of home. At Handbridge we said goodbye to Chris (home), Brian (cafe) and George (back to his car). That left Steve H, Dave H, Keith and me to complete the ride back to Meadow Lea via Hoole Lane & Guilden Sutton Lane with 47 miles clocked.
See route map and/or gpx file download.
TC