It turned out to be the sunniest and warmest day of my cycling year so far as I rode out to Rose Farm. Predictably quite a pack out today, so the Famous Five (Paul, Tom, John W, Ray and myself) set off promptly bound for the “Egerton Arms” at Chelford. Out via the bisected Heath Green lane, we zoom through Eaton before turning sharp left, through Ruston to the gates of Oulton Park. Darting through Lower Budworth and passing their own “Egerton Arms", we hit the A54 where we turn right and motor down it for a mile or so. Taking the narrow Blakeden Lane, we pass at the back of Cheshire County Constabulary then to wiggle through Winsford and onto sunny Middlewich. The route is customary as we pass Clive Green then through the Cledford housing estate and finally onto Cledford Lane heading East towards Brereton Heath. 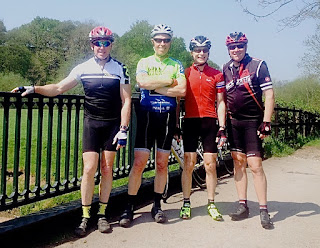 Ignoring the cycleway signs, which would have taken down a very bumpy NCN71, we circle and end up at the gates to Davenport Lodge. As the namesake owner is busily finishing his back garden back in Guilden Sutton, we crunch down the track to the bridge over the River Dane and the seclusion of this lovely hidden valley. The River Dane runs a long way from Axe Edge, within yards of the source of the Goyt River, passing Three Shires Head on its way into the Weaver near Northwich. Onwards through Swettenham, we can see the Lovell radio telescope across the fields as we head straight through Goostrey bound for the Egerton Arms at Chelford.
According to the pub website - “The pub itself dates back to the 16th century when as a coach house and pub, gentry and royals would freshen up before their formal visit to Lord Egerton’s estate at Tatton Park, just a few miles away.” We have visited just once before in a very chilly January 2014. They looked after us very well then, just as they did today despite a near full car park. The ride back via Lach Dennis and the Whitegate Way is uneventful with the wind now behind us. The Station House cafe is just closing at 15:00, but offers to sell cold drinks and ice creams to us, which is very gratefully received. Back at Utkinton having “ figure of eighted” Oulton Park, we have ticked off 56 miles at 24C. Running back to the Chester area, we all have 80+ miles on the clock today.
See route map and/or gpx file download.
CA