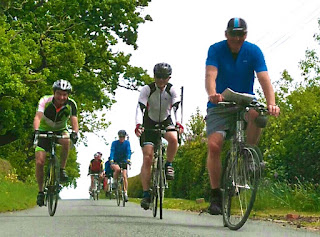 We had been in a similar situation before at Cleopatra's - devising a route to avoid certain heavy rain from mid-afternoon. The plan this time was to take a longer route out, but have a short, quicker return after lunch. Steve H. lent me his map and the nine of us set off north to Churton. The group consisted of Keith, Dave and Liz, Bryan W, Macca, Mike Mc., Steve Tan, Steve H. and myself. Liz was in her pretty bonnet, and Dave was in his element giving the back tour of pretty Churton. From Churton to Coddington is flat, quiet and idyllic. We drifted along in typical easy riders social mode. At Tilston we turned right, and meandered through to Bishop Bennet Way via Horton Green, Chorlton Lane and Cuddington Heath. We had the familiar steady climb from Lower Wych with Steve T., despite his current joint problems, gliding easily ahead. We crossed the Wrexham to Whitchurch road at Eglwys Cross. Bryan was a bit sceptical, as we were now coming into serious Clive, bunged- up mudguards territory, but, fortunately, today was dry. 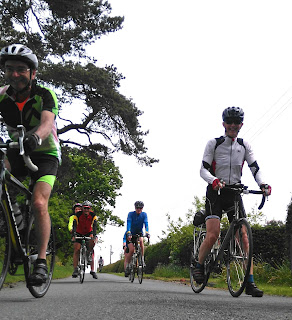 One lady member of staff was doing nearly all the work at the Hanmer Arms, but the service was good, and the food was fine. Steve H. led back, with Steve T. almost falling at the cattle grid on leaving the car park. Our direct way back was through Tallarn Green, Threapwood and Shocklach. There was some fine rain in the air, but the weather held off. Some of us opened the throttle a little on the Crewe-by-Farndon stretch. The tandem was on top form again: I believe the Russians have contacted them to see what exactly is boosting their performance. I'm not sure that you can take bread and butter pudding and custard intravenously!
Bikes were put in cars and we tucked into cake and coffee at Cleopatra's, although Helen was not her usual sunny self today. The blonde lady was very pleasant and efficient, nevertheless.  Only 32 miles today, but a relaxing route, and relaxing company. As we headed out the fast lads arrived. I did warn them that they had to make a choice between Victoria sponge and a damn good soaking. Being macho men, of course, they took both!
DH