We hardy nine met at Ness Gardens on what promised to be a “seepy rain” day or “camping weather” day, as one rider said.  Jim, Dave M and Dave P just came out to say hello and we welcomed back Kate whom we had not seen since 2011.  She was so keen to join us again that she took a day’s leave from work.  As the prospect of our unique lunchtime pub wetted the appetite of the fast riders, we were also joined by them today.  Bryan, George, Ivan, Kate, Mike Mc, Ray, Tom, Trevor and myself set off down through the back lanes of Neston to Parkgate promenade.  Instead of heading inland up Boathouse, we continued north along the coast to include some off-roading to Gayton.  Only try it when dry in early Spring if you want to avoid the undergrowth. 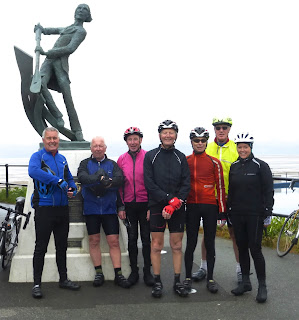 On, on through Lower & Upper Heswall we continued to Irby and Thurstaton where the cry went up that we had lost Mike.  Bryan phoned him and we eventually met up as agreed at Hoylake RNLI station.  He’d had a P@@@@@@@ when back marker.  From the subsequent inquest we learned: (1) shout if you have a puncture, in the hope that help comes, (2) have a ride-leader who can count past 8 - there were 9 riders, (3) keep your mobile charged and switched on. 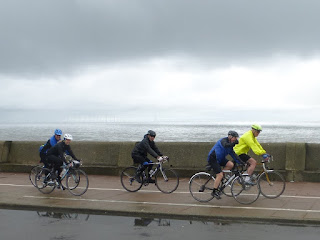 While waiting for Mike, three of the fast guys decided to go ahead to reserve our pub table ( !! )  After 5 –10 minutes Mike rejoined us and we then went at a fair lick towards New Brighton helped by a following wind and dry throats.  The sand encroaching over the cycle way both at Leasowe & Wallasey Golf Course was heavier than in previous trips, but that’s Government cut-backs for you.  After leaving the wide prom at Seacombe and crossing the Penny Bridge into Birkenhead, Trevor pointed out a new route along the Mersey which avoided the commercial traffic and gave us a view of a guy stranded while slack-lining.  For those who want to know more follow this link.
After 25 miles, Woodside ferry with the unique Gallagher’s pub + barbers was reached where we found the three speedsters tucking into burgers.  Trip Adviser states it’s the “Best food pub on Merseyside.”  I think some may agree if you had had a skinful and ONLY liked burgers; the beer and decor were good and service was OK, if a little slow.  Unusually CER lunchtime conversation did not involve the 3 PPP of the Premiership, Prostates and Politicians and for that we have to thank Kate for bringing a bit of decorum to the group. 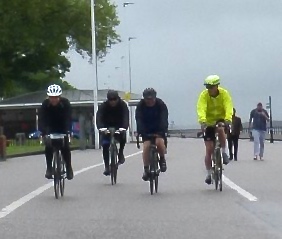 The three musketeers were replenished well before us Moderate six; so set off back to Ness themselves. With heavy burgers slowing us down we “bimbled” south along the Mersey shoreline to Eastham and as time was pressing, from there we headed west towards Ness.  Both Trevor and Kate peeled off just before Ness, while Bryan, George, Mike and I had afternoon tea among the ladies that lunch back in the University Gardens.  All in all, another pleasant 40 mile CER ride at 12mph.  And for Steve’s Egon Pub guide, Gallagher’s does not make the cut, so it will be back to The Refreshment Rooms next time from Ness.
BMacca