We weren't supposed to be here! Last Thursday I had ridden a recce in the Peak District in order to clarify a route for today. Steve Tan had kindly accompanied me, as we rode above Toddbrook reservoir, the one with the damaged dam, at Whaley Bridge. Most of the roads were open, but Lyme Park was strictly closed, and we had climbed over 4,000ft before returning to our starting point at Redes Mere. We had a fine day out, but the many steep climbs made it too hard a route for us to relish riding again in seven days’ time, never mind inflicting on others. Hence, we were now sitting in Tastebuds cafe in Whalley, as part of 'Plan B': to ride an alternative scenic route, this time in Lancashire, and not as severe.

Everybody had enjoyed a relatively straightforward journey, although Graeme's car was spotted coming into the village from the wrong direction, having missed their intended turn through chatting. From well inside the cafe, I thought I had seen Andy pass by. Then he bobbed into view travelling in the opposite direction. I managed to get to the door in time to give him a shout. It felt like the fairground stall where you needed a pole with a hook to catch the passing ducks! We were soon tucking in to bacon rolls, giant teacakes and coffee. The party consisted of Andy Barber, Graeme, Jim, Dave Pipe, Steve Tan and myself.

I had planned to stop and look at places of interest, so first off we visited Whalley Abbey, on the banks of the River Calder. The abbey was founded in 1296, when the Cistercian monks of Stanlaw (Stanlow) moved there from a flood-prone site on the on the Cheshire shores of the River Mersey near Ellesmere Port. It is interesting to note that Whalley has suffered some bad flooding in recent times. I am not sure how this may have affected the site of the abbey.  Next stop had us swooping down the lanes, past Salesbury Hall to Ribchester Bridge. In Ribchester we viewed the Roman Baths and stood above a big sweep of the River Ribble.  A fort had been built here by the Romans in AD72, and it was a crossing point for Chester, York and Lancaster roads. 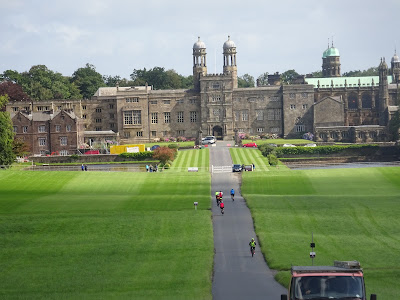 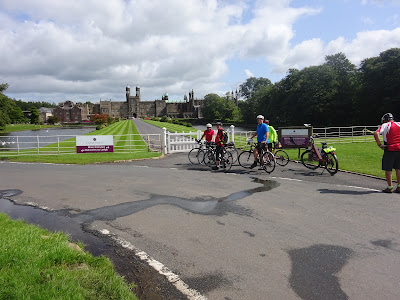 Back on our bikes, we were soon wandering up a rural cul-de-sac to view the attractive almshouse at Stydd. Built by the Shireburn family in 1728, it originally housed The Poor, and is now converted to four flats. Cue more photographs. We climbed up to Hurst Green, passing another lovely almshouse before passing the gate posts of Stonyhurst College grounds. Turning the corner at the top of the hill and viewing the magnificent baroque building below is a stunning site. Please use Google if you would like to know more; there is too much history to tell here. The list of famous alumni is impressive in itself.  By the time we had whooshed down past Cromwell's Bridge on the River Hodder, and then climbed back up, and passed Bashall Town, it became obvious that we had a dilemma. Despite our modest mileage, our sightseeing and leisurely winding up lush green hills, meant that it was time for lunch already! There was a definite 'Last of the Summer Wine' feel to our progress. To be fair, left to their own natural pace, Andy and Steve would have been miles up the road tucking into lunch at The Inn at Whitewell by now. The Higher Buck at Waddington had always been a considered alternative, and the staff were friendly and the food very good. 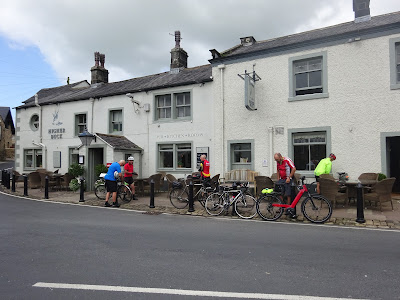 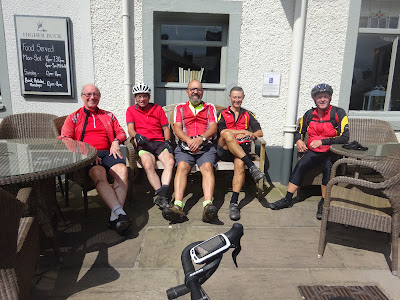 Lunch hadn't been quick, so after consultation with Steve who had been in this area with me before, we decided to give pretty Chipping and its high, quiet lane out, a miss this time. We wended our way past Colthurst Hall with views across the valley through sun dappled leaves. There was one 'arrow' I had forgotten at Talbot Bridge! We passed Browsholme Hall and turned onto the straight course of the York to Ribchester Roman road. A beautiful, wooded, downhill cruise alongside the waters of The Hodder and past The Inn at Whitewell followed. The inn was a manor house in the 14th. Century, lived in by keepers of the Royal Forest. It is still part of the Duchy of Lancaster estate and owned by the Queen. The strong wind was more in our favour now as we headed for Dunsop Bridge, Newton and Slaidburn with the Yorkshire Dales in sight beyond. The sun was out and the scenery cycling up the valley was delightful. There were plenty of large undulations to tire the legs, mind you! Slaidburn is a lovely village, but there is a sting in the tail if you wish to continue towards Ribblesdale: a hard, hairpinned haul uphill. We neared our turn-off to head over the shoulder of the fell and then pile downhill, hopefully for coffee and cake. Jim announced that he was 'knackered' at this point. I told him that it was nearly all downhill from here, but he was as reluctant to accept my words as if his GP had made the same judgement! There is a good cafe/restaurant at Holden Clough Nursery, less than four miles away, but we needed to get there before last orders at 4.30p.m. The last two miles are an outstanding downhill run. Steve, Graeme and Andy scouted ahead. 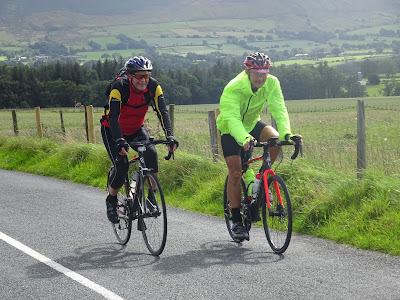 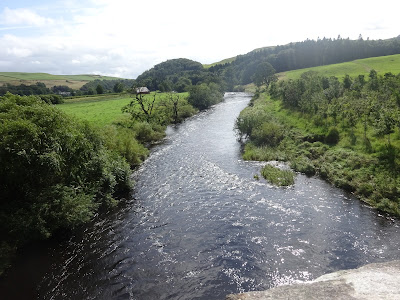 Thankfully we all made it, and we received a friendly welcome. The Bakewell tarts were the best Graeme and I had ever tasted. Behind schedule, but suitably fortified, we headed home via Sawley Abbey, the side of theA59, Chatburn and Worston. Just a few, flat miles back now. In the interest of time and Graeme's bike battery, the valley side route through Pendleton and Wiswell was rejected. Despite winding the pace up with Dave Pipe over the last stretch into Whalley, it was still 6pm when we reached the cars. Steve tells me that we covered 49 miles and climbed 2,600 feet. When so many were on holiday, I appreciated the support and excellent company of those who made the effort at short notice.