There were going to be four us of starting out on this route, but Clive saw some significant climbs in my route so went with the mods. Turned out a good choice considering I had meant a much easier climb out of Ceiriog; I had plotted the wrong road up but hadn’t noticed! I was asked about the lunch stop, (the Mill at Llangollen), but John keenly recommended the Special Welsh Rarebit at the canal-side tea room.

So myself, Ken and John set off in improving weather towards Chirk via the familiar route of Bangor on Dee and Overton. Passing the A5, we skirted Chirk by going to Weston Rhyn and along a delightful lane taking us into the scenic valley of the Ceiriog. Taking turns at the front due to a headwind we soon arrived at Pontfadog. A sharp right turn took us straight into double digit gradients, with some sections between 20 and 25%. A mile later and 800ft higher, we topped out with an impressive view of Llangollen and the limestone escarpment leading to our next climb, at World’s End. 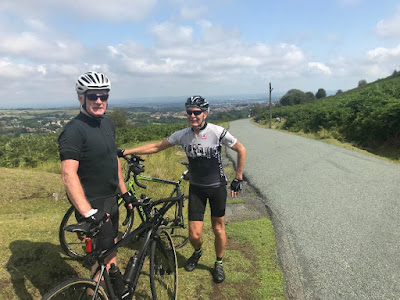 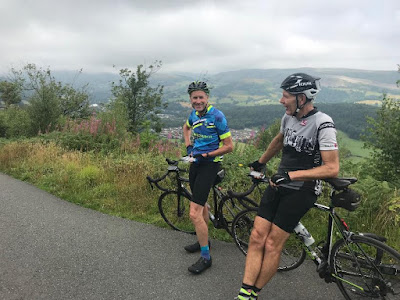 To John’s relief, after bigging-up the proposed lunch, the rarebit in Llangollen was indeed excellent and spot-on cycling fodder. Soon, in increasingly hot sunshine, we set off up to the Panorama road. At the ford at the base of the climb, we chatted to a cyclist who said he had walked across due to the slippy algae on the concrete, so of course we rode across. I crossed first but then heard a splash behind to see Ken lying in the river with his bike on top! Naturally, when you see an accident like that, the first thing you do is get your camera. Fortunately un-injured (bruises perhaps?), Ken managed to pick himself and bike up before I was ready. I requested that he go back in and lie, with bike, in the stream, purely for accurate photo-journalism and the benefit of you good readers. I missed what he said, but I think the gist was a No! 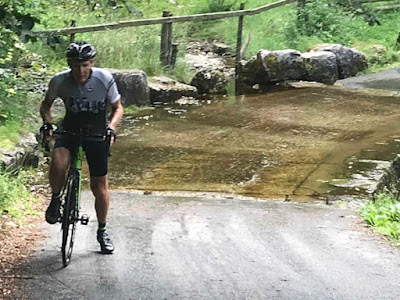 After the rigours of the earlier climb, the climb out of Worlds’ End didn’t seem too bad, and we were soon flying across the moors above Minera with Llandegla Forrest to our left. On descending, John split off and turned left to go to Chester to pick his car up, we turned right then 2 miles later left down a very rough track to yet another ford. This was quite a deep one, so an easy decision to walk.

We then passed down a beautifully wooded valley following the River Clywedog and Nant Mill. Abruptly emerging at the bypass, Ken navigated us through Wrexham, himself then to Gresford, me to Tilston.

An excellent days cycling with good banter aplenty, my route (Tilston to Tilston) was 58.5 miles with 3,850ft climbing, averaging 14.4mph. This route is 53 miles.