A large group of riders assembled at Delamere Forest Station Café on a warm bright morning. Once we had sorted out who was riding and who wasn’t and who was ‘brisk’ and who wasn’t, it looked as if there would be six for the moderate ride to The Dog at Over Peover – except that Dave P had arrived telling us that Peter had ridden with him from Chester, but he’d picked up a puncture about half a mile away from the café and was in the process of fixing it.

There followed a lengthy delay whilst we a) located Peter and checked that he could fix his puncture, b) got him to the café with it fixed and c) examined the cuts in his tyre(s) and established that they were too serious to allow him to continue with us. So, in the end, we would be six and not seven.

So it was 11.00 by the time we left Delamere heading, inevitably, towards Hatchmere and thence Norley. By this time ‘we’ consisted of Dave H, Dave M, Dave P, Fiona, George and yours truly. Taking the pretty Gallowsclough Lane in Norley, we headed across the A49 at Cuddington and the A556 at Sandiway. I had been anxious to make up for our late start so had been pressing on. At this point we’d averaged almost 15 mph – a supersonic speed for the mods. Things slowed down a little as Dave M led us over the River Weaver at Bradford Mill and up the rough path under the bridges leading up to Moulton. At Davenham we picked up Cycle Route 573, which runs east towards Congleton, passing through Lach Dennis and Goostrey.

Passing The Crown at Goostrey, we looked but couldn’t see any sign of the brisk riders who had planned to stop there for lunch. Either they were hiding from us or they were lost on the Whitegate Way.

Passing close by Jodrell Bank, we arrived at The Dog in Over Peover at 12.50, having covered just under 25 miles in less than 2 hours. As usual, the food at The Dog was excellent and the service friendly. There was some discussion about the multitude of ‘Peovers’ in this area.  According to Wikipedia, Peover is a rural area in Cheshire, southwest of Chelford and northwest of Jodrell Bank. It contains Peover Superior (also called Over Peover), and Peover Inferior (also called Lower Peover or Nether Peover) and Peover Heath.  Peover is mentioned in the Domesday Book as "Pevre", from a Celtic word meaning "the bright one" referring to the Peover Eye, a local brook. 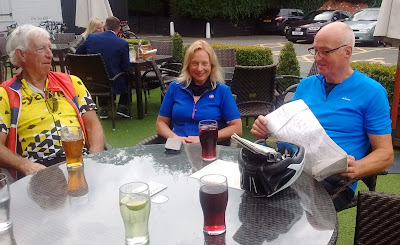 Suitably refreshed and photographed for posterity, we made our way out of Over Peover to Lower Peover. Here Dave M took his leave to ride back to Oscroft by a different route. We pressed on over Plumley Moor, crossing the busy A556 at The Smoker by wheeling the bikes over the pedestrian crossings.  Riding the short distance on the pavement alongside the A556, we turned right into Linnards Lane and followed this into Higher Wincham. From here we took the familiar route through Pickmere, Great Budworth, Comberbach and Little Leigh to take us down to the River Weaver at Acton Bridge.

Given the choice between riding up the very steep hill into Acton Bridge, or taking the riverside path to Dutton Locks and the more gradual climb back to Delamere, we stuck by the moderate group motto of ‘never take the hard route when there’s and easier one’ and rode down to the river. Fiona thought she was going to have to swim across the river, but found the crossing at the locks a novelty. She was less impressed by a muddy section of the path as we cycled towards the railway viaduct!

The climb out of the Weaver Valley up first Crewood Common Lane and then Norley Lane is certainly less steep than taking Acton Lane, but it’s quite a long grind, so it was a relief to reach the top and freewheel down to Hatchmere. Here we directed Fiona back through the forest to the café where she’d left her car. There rest of us split up like the Red Arrows, heading back home after 46 pleasant miles through the Cheshire countryside on a sunny summers day.

Thanks to Dave M for his guidance on the early sections of the route and to all on the ride for their company on a classic moderate ride.