Cycling out to the Ice Cream Farm for elevenses I met up with Jim on the way. Ray, Mike and Brian soon joined us and we quickly got down to planning the days ride. Ray’s suggestion of the Radway Café at Radway Green sounded interesting and was quickly agreed. The route was planned and the five of us made to go when Dave P arrived. Only just in time today Dave!
We took the usual route past Beeston Castle but then headed for Bunbury locks rather than Tilstone Fearnall and almost before we realised it we were passing the Boot and Slipper at a respectable pace. Through Church Minshull, past the Verdin Arms and then it was new territory for me but with the help of the SatMap and Ray’s local knowledge we made it to the Radway Green Garden Centre Café for lunch. Ray recommended the North Staffs Oat Cakes, the chef suggested the traditional filling (cheese and bacon): a perfect combination and just the job for cycling.
“I don’t suppose you will be out next week” says Ray “we’re meeting at Caegwrle?” What a cheek I think, having just done most of the Panorama route on my own only two days previously. So the Panorama route is agreed; although Jim, not knowing the area, is sensibly wary. “Is it tough?” he asks.
2.45pm and we’re still in the café but its time to make a move. Outside we find Jim has a puncture. Once fixed its back through Wybunbury with a stop to consult the map and approaching one junction, a “Left here” from Ray, “No right” interjects someone and my helpful contribution “Left is straight on!” “Too many cooks” concludes Mike. In Nantwich we eventually find the park bridges after a wrong turn necessitating a short backtrack and then its straight back through Bunbury to conclude an excellent day’s cycling.
Distance from Chester and back 74 miles.
BW
Posted by Gudfadirin at 18:13 1 comment:

Starting from the Little Roodee car park café in Chester we were rather spoilt for choice in terms of possible destinations and routes. Working round the table no one had any strong views. Ray came up with a route to The Club House on the Wrexham Industrial Estate which had undercover bike parking in case the predicted heavy afternoon rain came early. This was a new venue to most of us and eager to try something new the suggestion was quickly seized on. At 11.20 Ray led the group of nine (Ray, Jim, Mike, Graham, Vicky, Dave, Liz, Brian and Bryan) out along Chester’s River Dee Promenade towards Saltney Ferry bridge. Then following a route familiar to those who had ridden the Spring 50 we passed through Marford and from there on round the Wrexham Industrial Estate to The Club House (previously the Pirelli Social Club). Sure enough we parked the bikes undercover for a change and on entering the Club I was immediately reminded of the works canteen of some 40 years earlier. All that was missing was the snooker table! The choice of cooked meals was extensive, the quality excellent and the prices good.
Over lunch we discussed future rides including the Panorama route proposed for one of our rides from Bellis Garden Centre and an autumn ride to Graham’s seat from the Tudor House Café. Then with the weather still unsettled we headed south to Bangor on Dee before turning for Shocklach, Farndon, Saighton and back to Chester.
Distance from Chester and back a modest 42 but pleasurable miles.
BW
Posted by Gudfadirin at 21:29 No comments:

The forecast was for a 20mph SSE wind and showers; or in cyclists' terms, hard work in waterproofs making for an uncomfortable day.
I arrived at Bellis’ as Jim was dropping anchor, sharing the same thoughts about the headwind: but no rain yet. As we started our first cup Dave H arrived, soon to be followed by Dave P and Graham. After giving the weathermen a bad name it was decision time for our destination; two choices - The Blue Bell or home. The Blue Bell won. We took to the shelter of the narrow lanes with hedgerows down to Sutton Green but as we headed for Bangor-on-Dee it became a headwind. Time for the rule book – if they stop chatting the pace is too fast. And so all was well through Tallarn Green but as we were nearing Lower Wych Dave had a phone call which he had to deal with, dropped off a bit and missed his next turning up past Wigland Hall. We waited but finally decided he was lost for the day so on we went. Slow progress to Grindley Brook and then heaven; a sharp turn down the A41 gave us a tail wind. Five hundred yards and then a right to take a lane once more, keeping the tail wind all the way to the Blue Bell. As we were parking the bikes and taking a photo who should appear from the back but Dave – what a bloodhound! 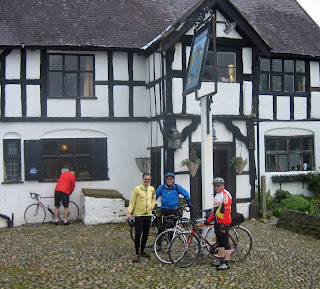 Declining an overpriced lime and soda I opted for an aptly named pint of Wrye Smile bitter and set about choosing something light from the menu. Jim followed suit whereas the other three opted for quantity and disappeared, later, behind a mound of carbohydrate and protein, some of which was washed down with several scoops of laughing liquid. And so it was, after only slightly rearranging the world, we set off in a happy state and soon become even happier as the tail wind persisted. Bradley Green was new territory for me but we were soon onto the well worn route through Oldcastle Heath. From Threapwood to Farndon the sun came out, the wind strengthened on our backs and spirits rose; 22mph, no problem – and we’re still chatting. Glorious; and not a shower in sight!
Back to Bellis’ for ten past four to celebrate our good fortune with tea and cakes only to find that after a short while we were the only ones in there and the staff were brushing up around us. Apparently they stop serving at 4:15pm – another lucky break. Then back to Chester with Jim for a 64 miler. The word for the day: invigorating.
RH
Posted by Gudfadirin at 15:04 No comments:

Arriving at Kinnerton Scout Hall on our tandem there were so many riders in the entrance it was difficult getting through the gate. Inside the hall it was even more crowded but Janet and her team had everything under control and after time for tea and biscuits our group was summoned to the table to register. Apparently prospective riders had been queuing at the door first thing in the morning despite warnings having gone out that entries for the event were closed. In all some 160 riders were thought to have taken part! This must be a record: no doubt due in no small part to Janet’s advance publicity. 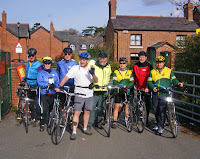 Photograph: "Group 7 ready to go" with thanks to Glennys Hammond

Our group assembled outside and I was pleased to see that David Robinson (CTC national Chair) was joining us. We got off to a good start, although David dropped off the back early on, and we soon settled down to a steady pace ably led by Peter. In perfect conditions the miles flew by, the first control point was reached followed by a comfort stop in Holt, then on past Stretton Mill to the next control. Here Graham and Vicky caught up with our group of Peter, Bill, Alan, Ted, Glennys, Erla and Bryan. A few hundred yards further on they flew past to be briefly seen again at the Overton lunch stop.
The lunch arrangements were faultless: soup, tea, sandwiches, savoury snacks and cakes were served without any fuss or delay. Indeed the food was so good that our group spent too long talking and enjoying the food, necessitating a faster than planned ride back to Kinnerton!
Some statistics: distance 80.5 km, riding time 4:00 hours, total time 4:40 hours, average speed 20.0 kph, maximum speed 59.5 kph (now where did we do that). A great day’s ride in perfect sunny spring weather.
Thanks go to the group: one couldn’t wish for better companions. Most of all though the organisation was impeccable: from the start through the controls, lunch and the finish. If you didn’t know, you would think they did this every day. Thanks again to the organisers and the many helpers.
For route map and/or gpx file download.
BW
Posted by Gudfadirin at 19:54 No comments:

With a Trek road bike parked outside the Rose Farm Garden Centre café I guessed that Jim was joining us after his recent skiing trip. Sure enough Jim was inside and soon the others arrived followed by John and Eunice Mawson who joined us for elevenses. Ray had suggested a ride to Audlem on a couple of earlier occasions. Today the choice of destination was unanimous and Ray was invited to lead. Saying goodbye to John and Eunice six riders set off through Tarporley, Bunbury and Brindley to the sound of conversation and a persistent birdlike squeak from Bryan’s bike. The application of sun-block to the left-hand pedal reduced the squeak to an acceptable level and good progress was made on traffic free roads through Ravensmoor and Sound before the final uphill pull on the A525 into Audlem. Here the Coffee Lounge Café was chosen for lunch, on Ray’s recommendation. With its courtyard garden at the rear, excellent menu and secure cycle parking this proved ideal. While we relaxed in the spring sunshine the staff prepared the food: sandwiches, soup, lasagne, tapas and scones - all superb.
Mike had to get back early to pick up his car from the garage so he bid us farewell and made his own way home. The remainder set off for Marbury in the warming afternoon sun. The day was proving too good to be true but to bring us back to earth Dave had a puncture! Once sorted, we continued on through delightful countryside on almost deserted roads by way of Hetherson Green, Brown Knowl and Bolesworth. Ray and Dave peeled off towards Beeston to return via Rose Farm Garden Centre while the rest of us headed past the Ice Cream Farm and the huge new marina by the Shropshire Union Canal which had been filled with water. The first boats will start appearing soon. Back on home ground now we headed to Christleton and the canal towpath back to Chester with Graham continuing along the River Dee path and the coast to Prestatyn. Another wonderful day.
Distance from Chester and back 68 miles.
BW
Posted by Gudfadirin at 10:12 No comments: