On my way out to Tattenhall, I overtook a rider in Chester who seemed to follow me all the way to Waverton.  It transpired this was Paul R who was trying us out for the first time.  The ride to the Ice Cream Farm was therefore used to inform Paul of our ethos and paucity of rules and regulations.  We arrived early just as Dave M arrived – he was only out for the coffee as he was still in “Audax Recovery Mode”.  There were a lot of us out today: Janet, Trevor, Ray, Alan, Liz and Dave, Ivan, Norman, Martin, myself, Peter (out for his second time) and Paul.  I suggested a ride of about 63 miles to Pipe Gate (“Where?” they all cried.  “South of Woore”.  “Where?” they repeated) and in sheep mode, we set off bound for Carden and Tilston.

At Carden my phone rang, it was Janet “I’m near Beeston Castle, where are you?” – we had left without her, as she was still in the loo!  I gave her some directions to meet us at No Mans Heath and we ploughed on.  A mile up the road, Norman was having problems with his panniers so the lead group waited at the Carden Arms.  Onwards via Tilston and Ebnal Lane, we arrived at the A41 No Mans Heath rendezvous.  I called Janet but she had decided to head homewards, so “Group Apologies” to Janet for not realising you were not with us.  Off again towards Aston but a puncture halted us after a half a mile.  This provided the time to try and fix Norman’s pannier (which had a missing fixing screw) using a cable tie.  At this point I decided to abandon the planned route to the Chetwode Arms and go for the Shroppie Fly in Audlem.  However I now planned an indirect route to take in the flight of locks at Cox Bank.  So out of Aston we headed for Burley Dam and Wilkesley. 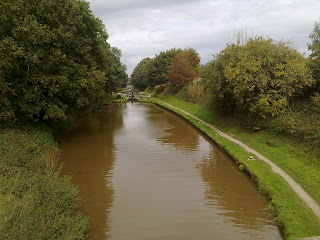 Arriving at the flight of locks, a few decided to take the direct route into Audlem along the canal whilst the rest of us kept turning left until we hit the canal again in Audlem town centre.  The food came swiftly and during lunchtime Norman fixed his bike courtesy of the local bike shop, and Alan had repaired a slow picked up earlier.  As the sun warmed us we left within the hour for a yet more circuitous route back.  For us all lots of new lanes were cycled as we negotiated Nantwich bound for Tilley’s at Bunbury.  Hedge-cutting season had started so occasionally it was a hazardous ride crossing our fingers that no further incidents occurred.  At Bunbury, Ivan shot off to get home early and the rest of us acquired our Tilley Loyalty cards.  Arriving back at the Ice Cream farm with not quite 60 miles on the clock, three of us were Chester bound with over 80 miles ridden and a dry day again.
See route map and/or gpx file download.
CA

Posted by Gudfadirin at 12:00 No comments:

15th September 2011: Southport and beyond

In a departure from the usual cycling round Cheshire and Wales, this special ride explored the workings of Merseyrail before a pedal was pushed in anger.  After Norman, Bryan, Ivan, Dave Hill and Janet survived the rigours of the lifts and escalators at Liverpool Moorefields station, we travelled to Freshfields on the Southport line, where we were joined by Dave Heath and Jim (who had used a car and had cycled from Lydiate).
Setting off north from the station, we recrossed the railway line at an unmanned crossing, and then braved flying golf balls before entering Formby woods (a red squirrel reserve). We then joined the last few miles of the Trans Pennine Trail, along an old railway track, but now a busy road with an adjacent cycle track. We passed along the sea wall at Southport, with much use of bells to clear ambling late season tourists out of the way before heading further north along the coast, with clear views of Blackpool Tower, St Annes and the edges of the Trough of Bowland.
At Crossens, we hit the road proper, passing the large Environment Agency pumping station that keeps this part of Lancashire from returning to a lake. It was noted how low the houses were in relation to the cycle path, which is the top of the dyke: we were on a level with their bedrooms! We then passed through Banks. The land here is suited to market gardening on an industrial scale, and we passed fields of greens, and large areas of glasshouses. Although the lanes were narrow, there were lots of 38 ton wagons on them, transporting the goods to the supermarkets (along with very large tractors with spiky things sticking out from them!)
Crossing the busy A565, we lunched at the Legh Arms, Mere Brow: probably the last time CER members sit outside this year. Food and ale were good, although a sudden descent of seven riders on a sleepy Thursday gave the chef apoplexy, and the service was slow.

Heading south-ish, we weaved our way through Holmeswood, passing Martin Mere, and skirting Burscough and Ormskirk. Soon we hit the hill challenge for the day, climbing to 56 metres above sea level on the Clieves Hills, for stunning views of our route. Coasting back down the hill, we meandered the lanes again, crossing and re-crossing the canal, passing through Lydiate, and then rejoining the TPT, which is called the Cheshire Lines path in these parts. Dave H and Jim left us here.
We re-emerged from off-road cycling to join rush hour traffic on the road from Maghull to Seaforth. However, turning off the main road after a couple of miles, we reached the inner city oasis of Rimrose Valley Park, which took us away from the hustle and bustle to within a few hundred yards of Seaforth station, and back to the delights of the Underground for the journey home with 42 miles completed.
See route map and/or gpx file download.
NL 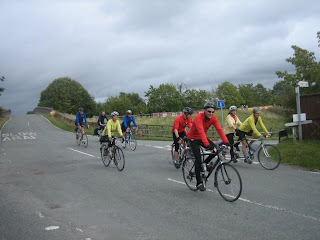 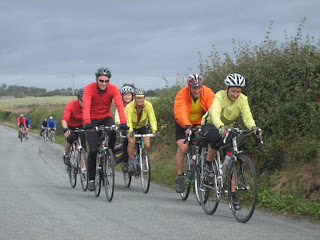 The weather promised to behave itself, and it did, with only a few spots of rain in the morning and a warm afternoon.  Eleven of us (Ray, Bryan, Brian, Trevor, Alan, Janet, Dave & Liz P, Mike G, and I along with newcomer Peter) set out from Holt heading for Tilston by way of Wetreins Lane.  The first hurdle came on the main road to Tilston that was closed due to hot tar operations; and hot it was, as we walked by on the grass verge.  This was one of a few such closures as various lanes were being surface improved.
Photographs by Brian MacDonald
Out via Horton Green to Oldcastle Heath, we snaked our way to Big Arowry and into Bettisfield Park, and through the “blink and you will miss them” hamlets of Wolverley, Noneley, Rue Wood and finally into Tilley just south of Wem.  The Raven in Tilley is a real find; the landlady was friendly but warned of a 30 min food delay because “everything is cooked freshly prepared” – true to her word the food arrived as predicted and very tasty it was.  Coupled with a wide range of guest beers, it is worthy of a return trip at a later date for sure.  Brian was back briefly from Scotland and the Orkneys and selflessly played the 11th man role for a good part of the day. 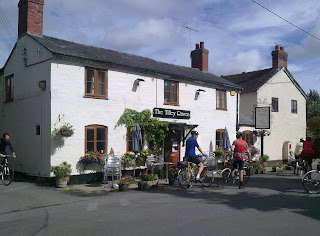 As we left the sun came out and we set off via Wem town for lanes anew and yet more hamlets, in a figure of eight in the English-Welsh badlands intersecting at Tybroughton.  I have to confess I like this tripartite area of Cheshire, Shropshire and Wales – there are lots of lanes and few hills to worry about.  There were mutterings of an afternoon tea stop so we ended up quite early back at Hildegard’s for tea and cake.  Peter did well on his first outing, and promised we would see him again.  A 49 miler from Holt, but 70+ miles for those Chester bound.
See route map and/or gpx file download.
CA
Posted by Gudfadirin at 15:59 1 comment:

An unusually fine and sunny day was in prospect as eight Easy Riders gathered at Rose Farm garden centre, Utkinton.  The roll call was Clive, Dave H, Dave and Liz, George, Trevor, Jim and myself.  Dave offered the Buck House Hotel, Bangor-on-Dee as a destination and with a clear sky we freewheeled through the warm breeze towards Beeston where Clive departed to attend an afternoon engagement.  We cycled on toward Bickerton as conversation flowed about George’s recently completed LEJOG.
As we enter the pub a vast array of ceramic teapots confronted us, apparently 1500 in total, belonging to the landlady, they must have had an influence as Dave H ordered tea!
A return route via Shocklach, Horton Green and Tilston was agreed and the group set off once again into the hazy, sun-drenched lanes.  This is the life!  Three riders peeled off as we got nearer to Utkinton with only four returning directly to Rose Farm, 50 fresh air miles earned.  A mid-summers day climate on 1st September: could this be the start of an Indian summer?
DB
Posted by Gudfadirin at 18:29 1 comment: