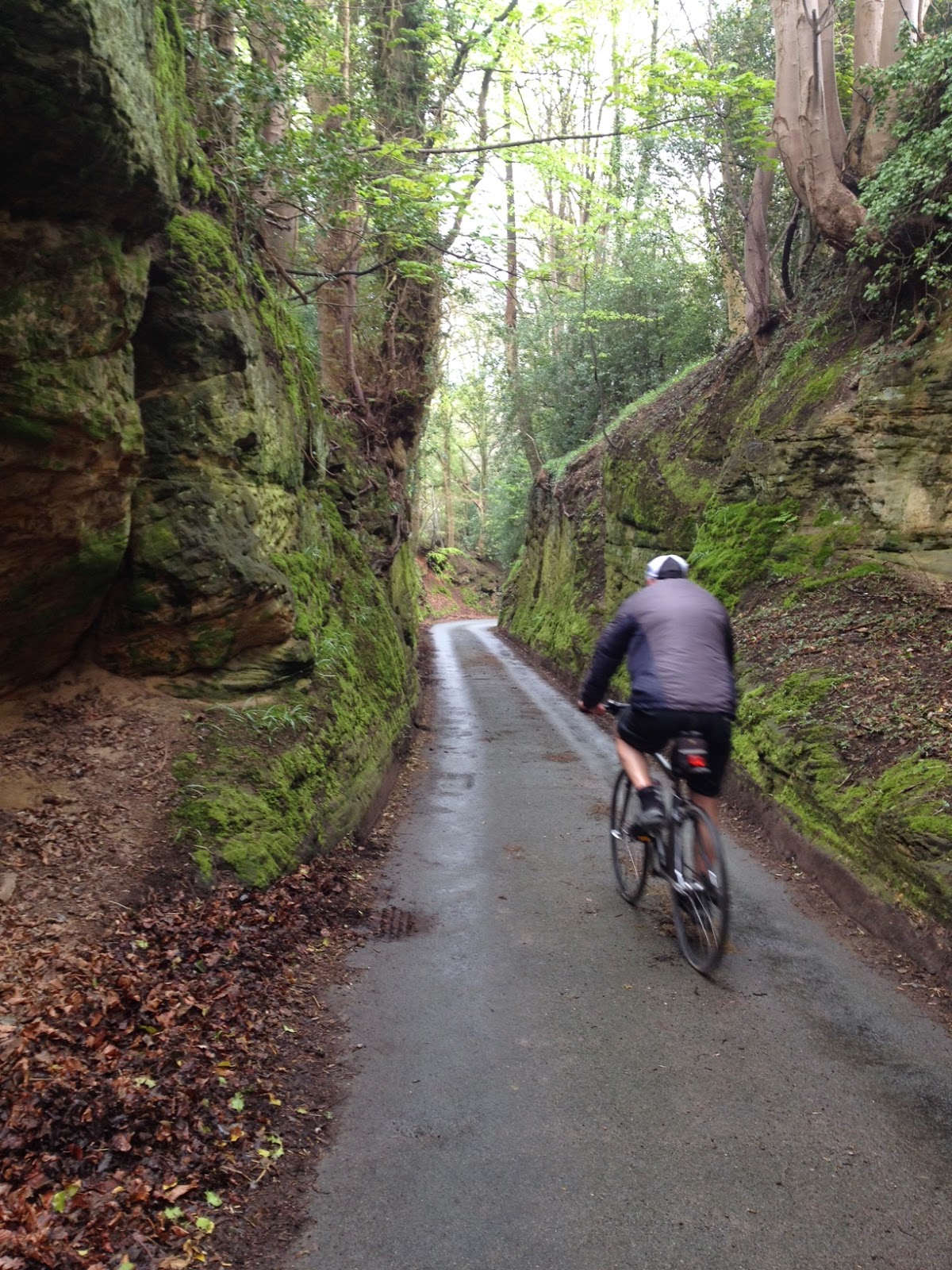 Five of us met at the Raven transport cafe just south of Whitchurch for today’s Special Ride. It’s a big place with good cheese on toast and coffee, so this set me up for the day’s 61 miles. We i.e. Roy, Dave H, Dave P, Steve and myself, set off promptly in the early morning mist bound for Calverhall. It was a bit chilly, but I was hopefully that it would warm up. We take New Street lane and the long 5 miles to Market Drayton. Out eastwards briefly on the A53, we dive off up the long rise to Hales. We are looking for the Offleys - be it Bishop’s, Rock, Hay, Marsh or Brook. Clearly Offley was an important local - perhaps a corruption of the Mercian King Offa? At Bishop’s Offley, I can’t resist a detour through a steep sandstone canyon then down Jackson’s Lane to Walk Mill valley. Soon we turn at The Star pub, our lunch stop on last year’s 100 miler, bound for the last Offley i.e. High Offley, which is just next to Grub Street - an oddly named hamlet in the middle of the countryside. We are running south now with a bit more sun on our way into Newport. Out through Edgmond and we have completed the 34 miles to the Sutherland Arms in Tibberton. 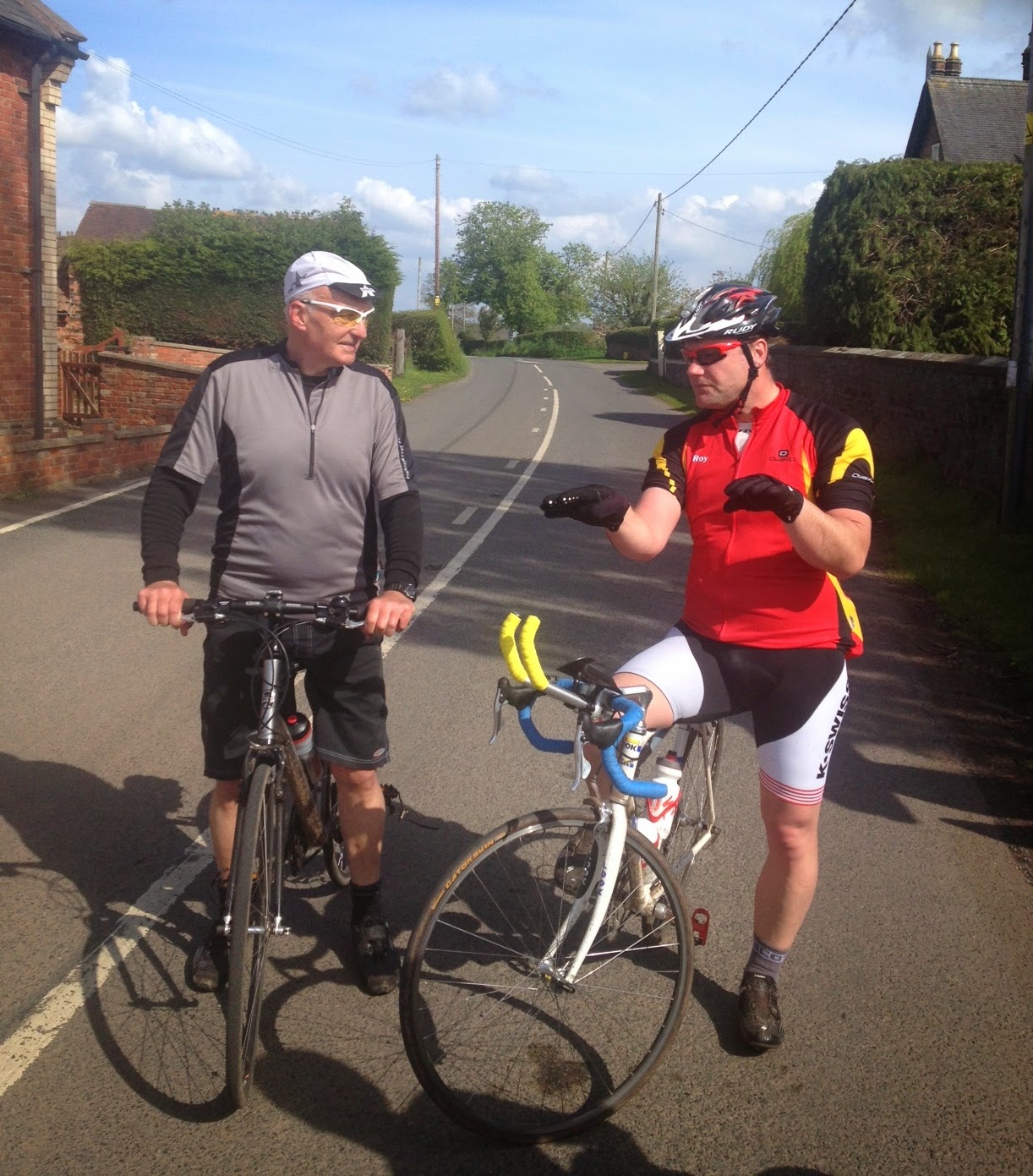 Just as I arrive there’s a text from Steve who has a puncture. I ride the mile or so back to assist and a while later we are all sitting around our pre-booked table. The food comes promptly and is of good quality and price. Suitably revived, we set off in the sunshine westwards ho. At Stanton under Hine Heath, we intercept the NCR 45 that will take us back to Whitchurch. Dave H enquires the name of the hills up ahead, and I’m not sure but I determine it’s Marchamly Hill at 160m and there’s a single chevron on the OS. Dave P makes it despite his fixie rig, the rest of us grind up through the trees. At 15:44, we have to wait for the 15:49 train to pass at the Prees Station level crossing. The way back is easy to the Raven where good cake and a coffee is just £2. This ride has taken us through acres of good Salopian valleys and fields, and you would be hard pressed to find better riding locally.
See route map and/or gpx file download.
CA
Posted by Gudfadirin at 17:59 No comments:

It was a surprise in a spell of good weather that only 4 turned up at the Chirk Tea Rooms: Dave & Liz P on the tandem, Paul R who had cycled out from Chester, and Steve. After a discussion, the tandem decided to head off to the Queens Arms on a relatively level route, while Paul & Steve headed for the hills. Each had brought a route, but decided to follow Steve’s out to Llanrhaeadr, over the tops and back through the Ceiriog Valley.
The start foretold the hills to come as we climbed steeply up Chirk Bank, and then headed SW through Selattyn and Rhydycroesau, where we left the B road and headed along the lanes via Llangadwaladr with superb views southwards and towards the hills ahead. After some hard work we dropped down into Llanrhaeadr, which seemed very sleepy with both pubs closed on Thursday lunchtimes. It was still relatively early and we pressed on, leaving the town up the lane heading to Pistyll Rhaeadr, before turning right and starting the ascent over the southern flank of the Berwyns. 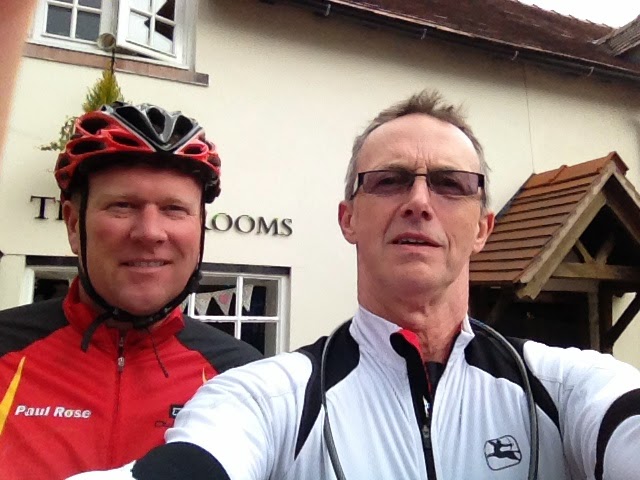 After a long steep climb we reached 439m, and then enjoyed the long descent to the Hand Hotel in Llanarmon. We both tucked into gammon and eggs, and chatted to a fellow customer who told us about his cycling days long ago with the Wrexham Wheelers. From Llanarmon it’s a relatively fast and straightforward ride down the valley back to Chirk, although we chose to meander pleasantly along several side roads for variety, except for the lane from Graig to Bronygarth which was long steep, very rough and should have been avoided.

Photograph by Steve Haywood
We arrived back in Chirk for a couple of coffees and a quick photo for the blog, before Paul cycled back to Chester, and Steve to home the easy way by car.  A relatively short 36 miles but over 1400m of ascent had made for a good day out.
See route map and/or gpx file download.
SH

The Ice Cream Farm was busy with preparation for a heavy day of families freed by the Easter holidays.  Seven of us turned up: Paul R, Dave H, George, Keith and Steve, as well as Dave M who announced he was babysitting and couldn’t join us.  No one had arrived with a route, so after some debate we took Dave M’s suggestion of the Joules Brewery Tap at Market Drayton as our objective.  As Dave M wasn’t coming, this meant the rest of us had to work out a route, so between Paul and Steve navigating, we found our way there and back again.
The weather was good, the route fairly flat and fast, as we headed out through Bunbury and Brindley to pick up Route 552 at Ravensmoor. This led us through Audlem and then further south to arrive at our destination at 13:00 in good time for lunch.  As we sat enjoying our food and drink, conversation turned to Health & Safety as we watched a digger at work only inches away on the other side of the wall we sat beside.  Next a couple of pallets of malt arrived, placed precariously close to our bikes. 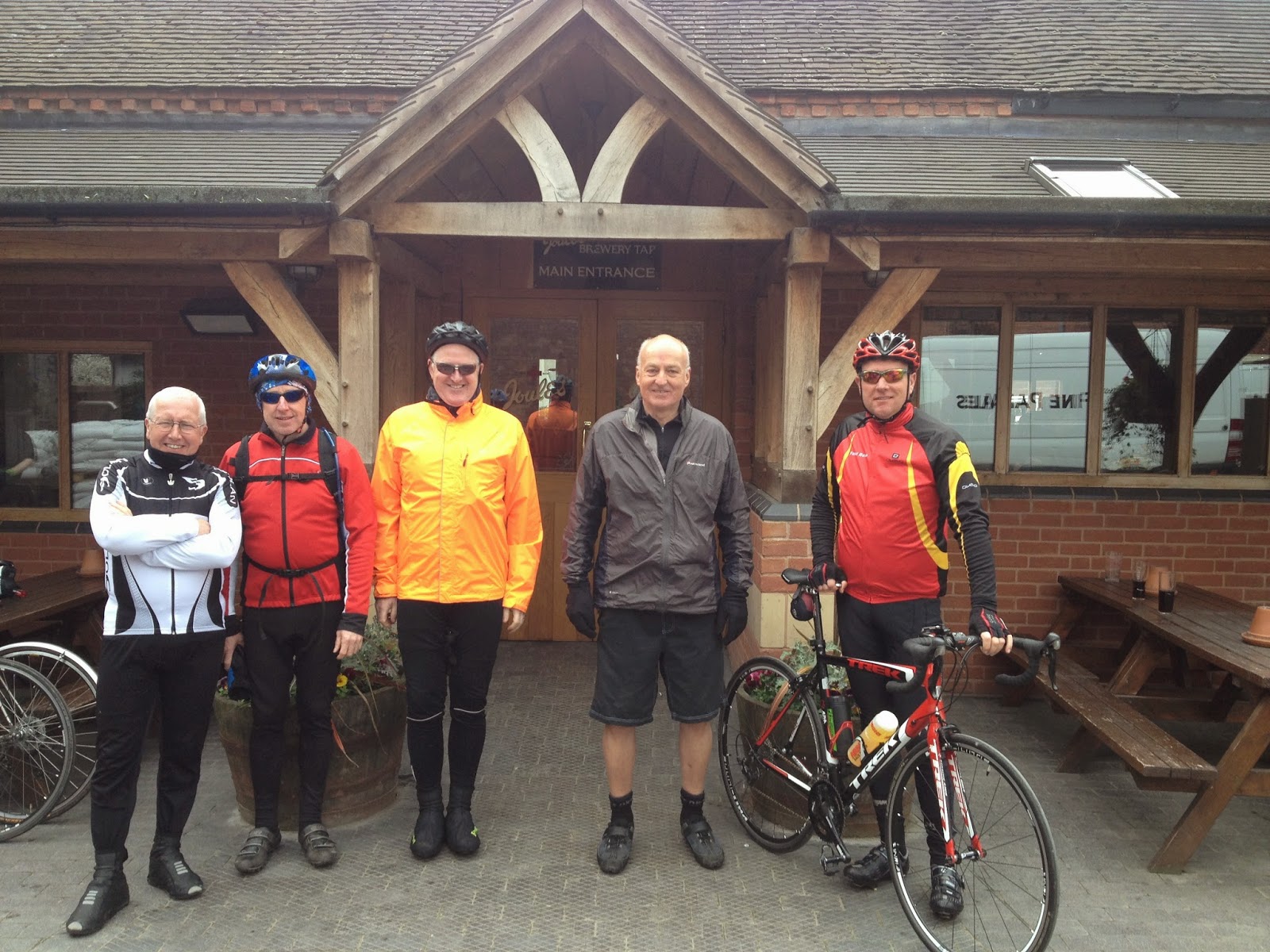 The worst didn’t happen, and we left to weave our way through the Market Drayton streets and pick up the lane to Longslow, which led us naturally to Calverhall, Ash Magna and into Whitchurch. Following our traditional practice of heading the wrong way up the one-way street by the church, we picked up the natural route through Marbury, Bickley and Cholmondley, the main discussion being which café we would head for. Paul chose Burwardsley and after climbing past Harthill, we arrived at the Teddy Bear Tea Rooms. None of us had been there before and we enjoyed hot drinks and cake, while we admired the incredible views northwards over Cheshire towards Ellemere Port and Liverpool.
From Burwardsley it was a short fast downhill to Tattenhall, which we sped through and then went our separate ways around Huxley and Hargrave.  An enjoyable and thankfully uneventful ride with a popular destination that gave us 55 miles cycling, though by the final end of our journeys, most of us had clocked around 70 miles, with Tom coming close to the magical 100.
See route map and/or gpx file download.
SH

Posted by Gudfadirin at 20:32 No comments: 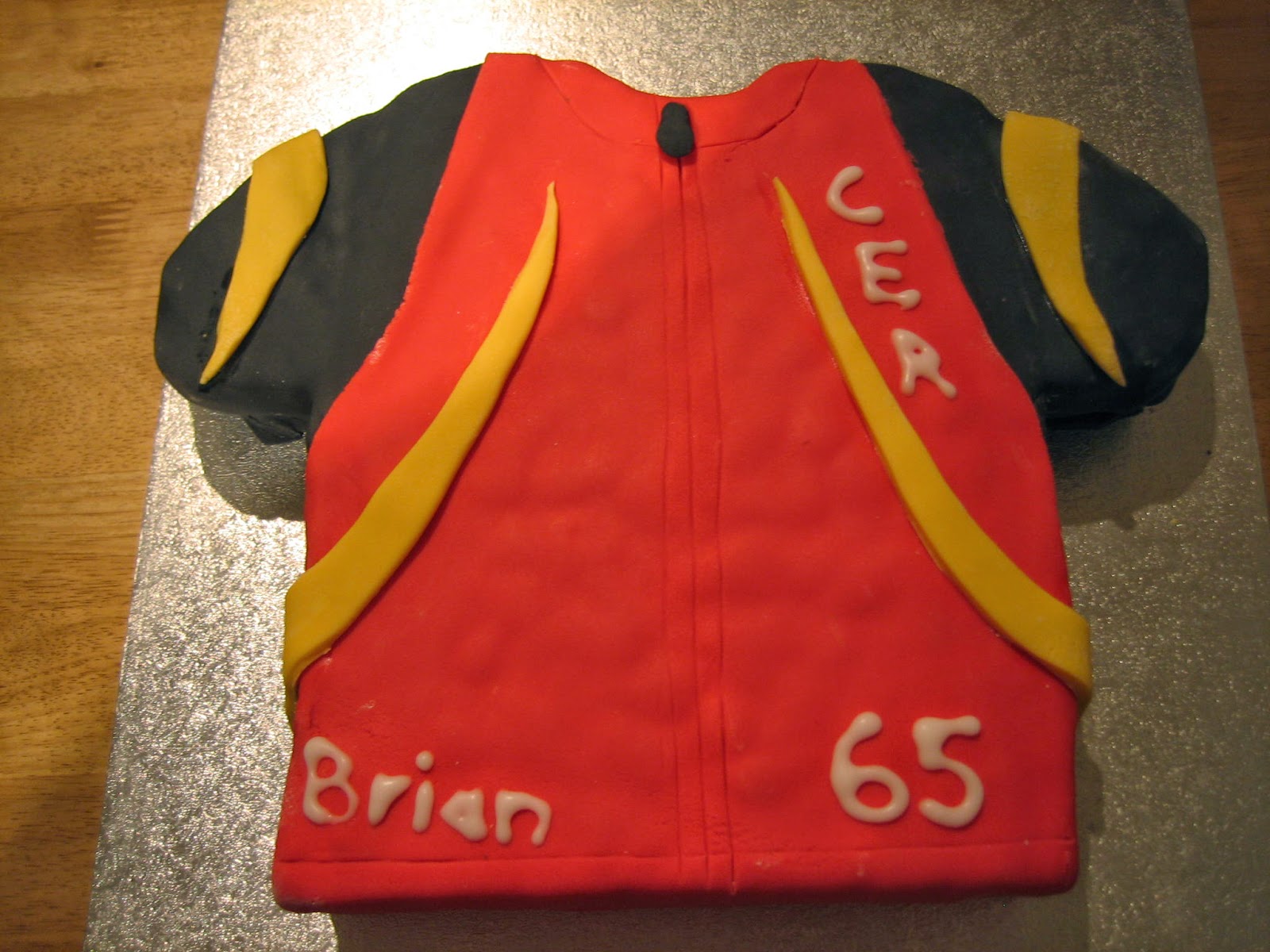 Posted by Gudfadirin at 10:02 No comments: 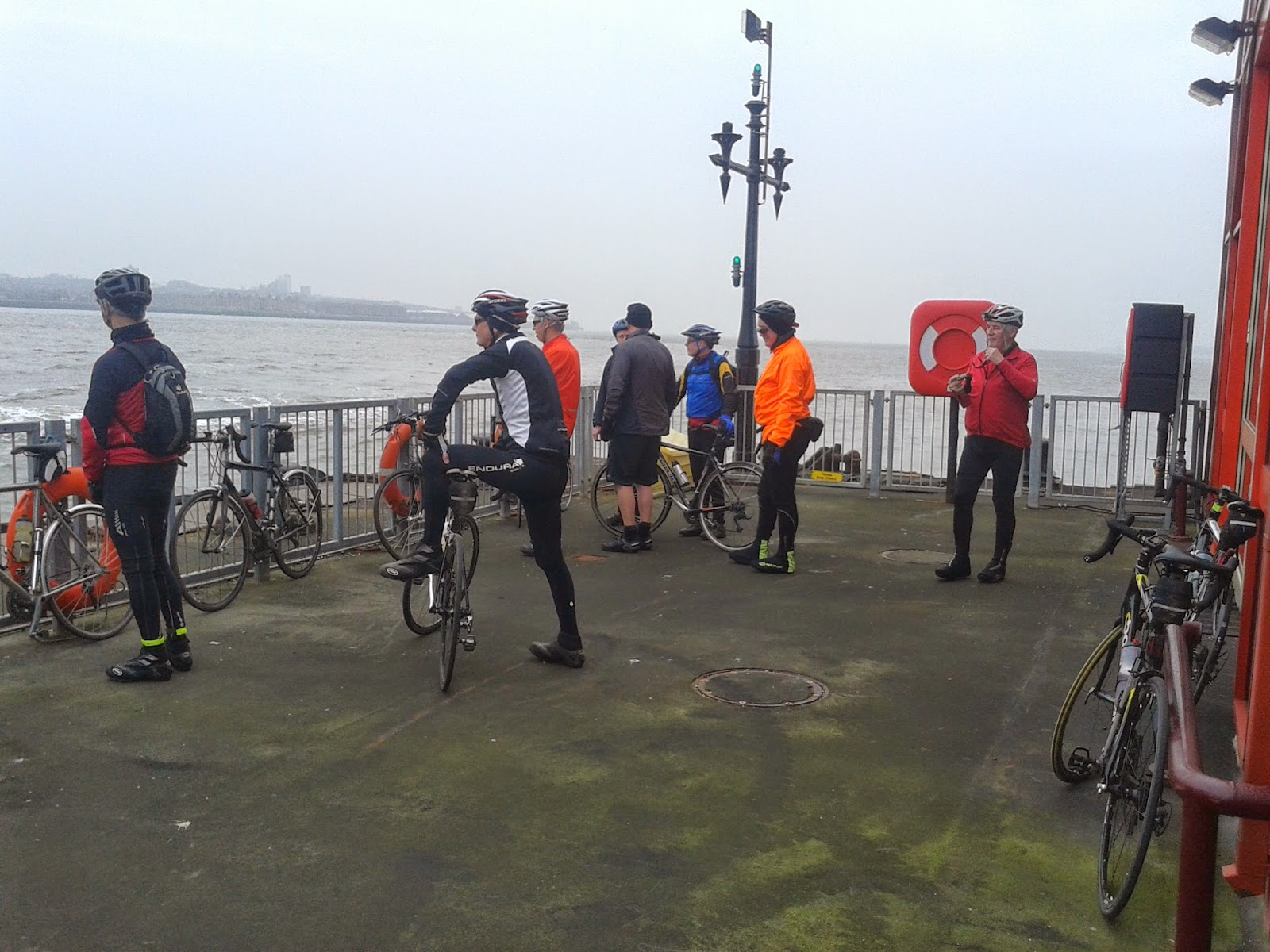 An overcast day partly helped by the Sahara dust as nine turned out at Ness Gardens for Brian Mac’s tour of the Mersey estuary. Besides Brian, there was Clive, Ivan, Steve, Tom, Dave H, Keith, Mike G and Jim. Dave M had been released for a short ride but was unable to come, as it was his wedding anniversary. 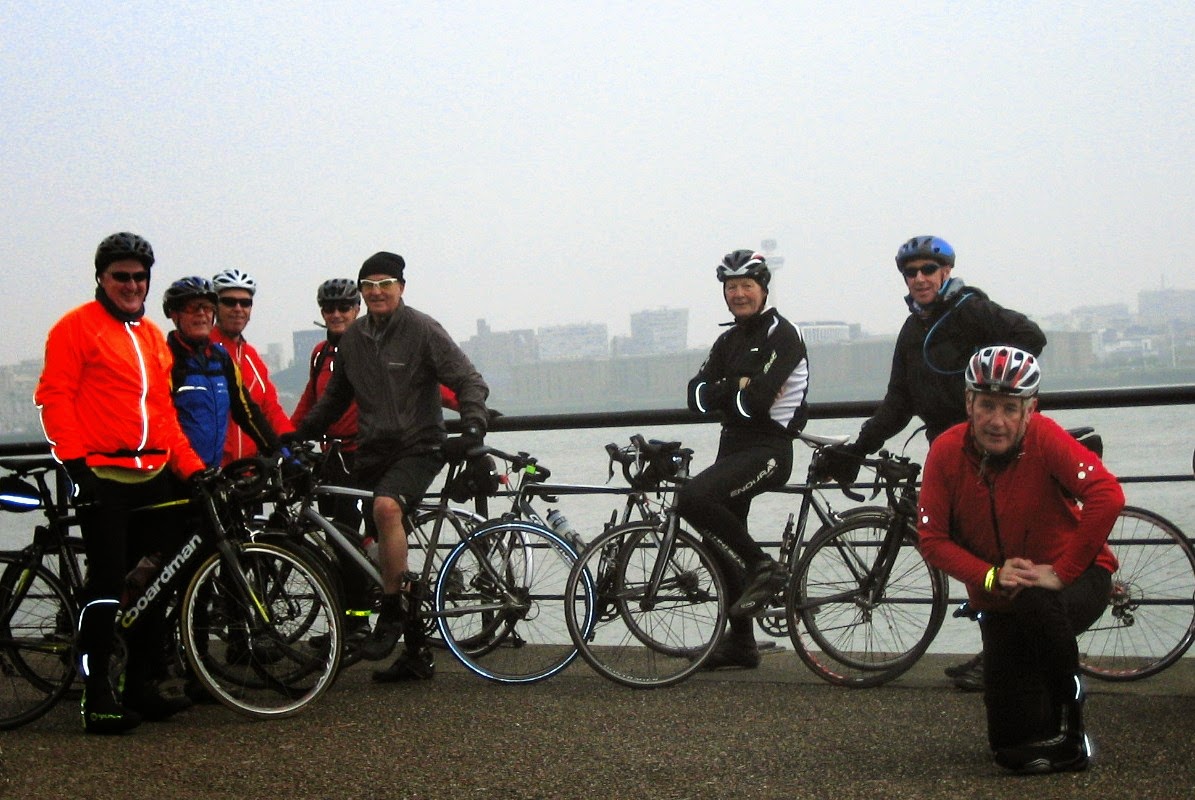 We set off just after 10:30 at a brisk pace for the Mersey Ferry passing through Neston, Raby and Thornton Hough (where the intricate skills of the stonemasons could be observed at the church entrance). Brimstage followed then onto Storeton dropping down to the Mersey estuary via Higher Bebbington and Prenton. We arrived at the Birkenhead Ferry having circumnavigated our way around Cammell Laird in time to catch the crossing and were joined by a large party of school children.
The crossing was uneventful and the views were greatly limited but sufficient to enable us to see the two ‘Liver Birds’ on top of the Cunard Building; the female we were advised was looking for the returning seafarers whilst the male was seeing whether the pubs were open. 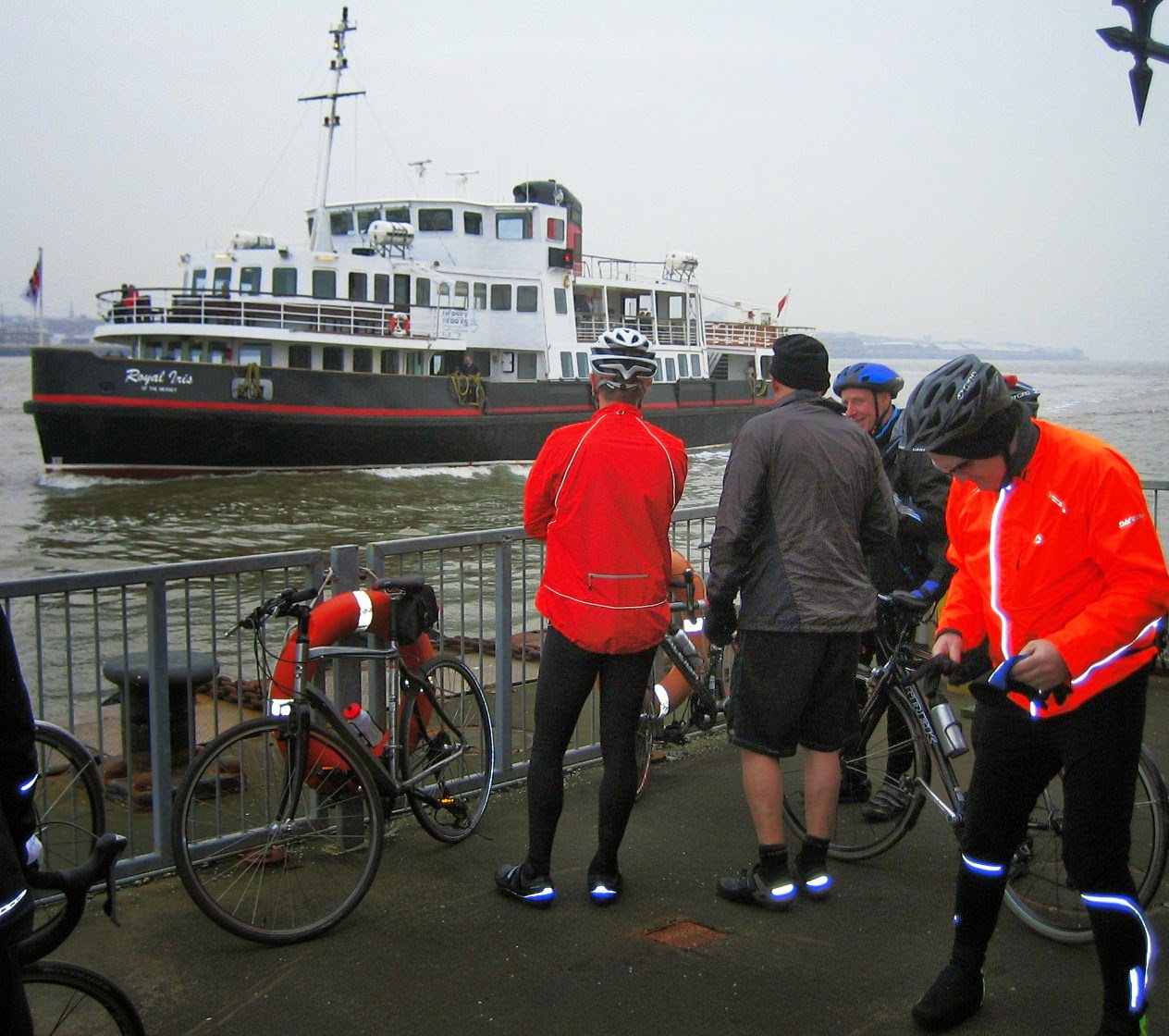 On through Albert Dock, following the estuary to Otterspool, then onto Cressington, circumnavigating our way in and around Garston before passing through Speke and finally picking up the Trans Pennine Trail that took us on to Hale for our lunch stop at the ‘Childe of Hale’ where we were suitably well served.
After lunch we again followed the Trans Pennine Trail to Widnes where we were able to experience the aroma from the Granox factory. Keith advised that Granox and Widnes have such a long history you know you are in Widnes because of the distinctive smell. 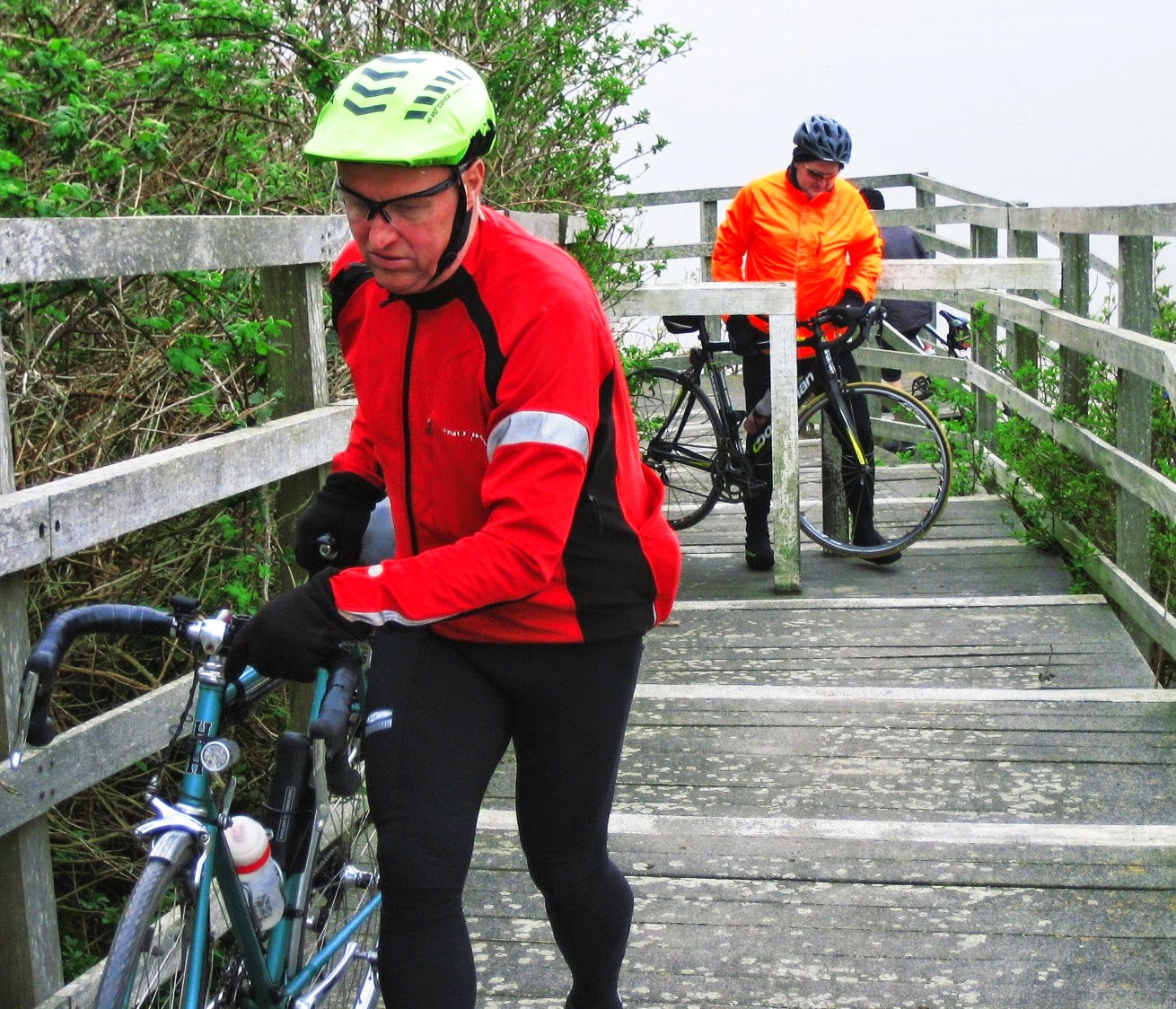 At the Runcorn Widnes Bridge Dave H took over the navigation to make sure we didn’t end up at the local hospital lost and wondering where we should go next. He took us via Runcorn Hill, Weston Village then via various cycle routes and footways to the A56 and Route 5 to Frodsham. We had a delightful café stop at the Castle Park Arts Centre in Frodsham before splitting into two groups; those
making for Ness and north of Chester (Clive, Ivan Brian, Tom and Mike G) and those for south and east Chester (Dave H, Keith, Steve and Jim).
Return to Ness Gardens was about 56 miles but for most of the group they would have covered in excess of 60miles.
Overall a very pleasant cycle ride with its mixture of interesting urban and industrial features.  Also a big thank you to Brian and Dave H for navigating us all safely through such a complex area.
MG

Posted by Gudfadirin at 12:25 No comments: